This article is cross-posted from MoaCube's personal blog.

We're an interesting case. Even though I wish we weren't.

If you're not familiar with our work, three and a half years ago we've released Cinders. A subversive fairytale visual novel, which became quite successful for such a niche genre, earning us over $200k (still growing thanks to the Steam long tail).

I like experiments, so we went the same route as with Cinders: direct-only at first, with Steam launch only after some time has passed, allowing me to compare launch day data to see what exactly has changed in these three years.

So for all those indies wishing it would be possible to do A/B testing of the same game released in different times, we're as close as it gets.

Spoiler alert: the results are not very optimistic.

Here' the big one. This is our website traffic on the day of Cinders release: 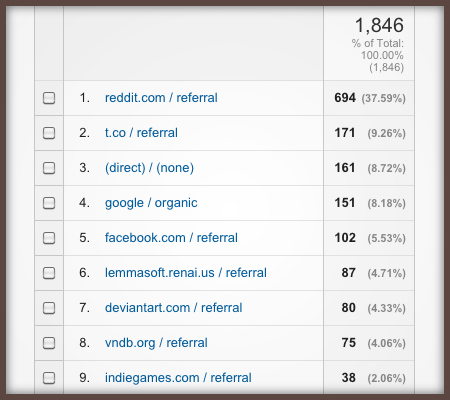 And the same thing for Solstice: 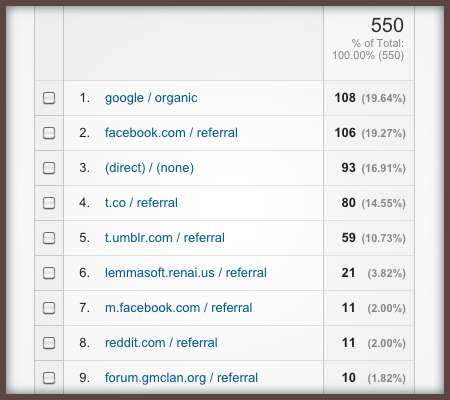 There's a noticeable difference, but both numbers are nothing special and come mostly from social networks -- about what you'd expect from a relatively unknown indie game's soft launch.

But consider this: when Cinders came out, we were a new indie studio that just released its first title. No track record to speak of, no significant social medial following, no established fan base.

Solstice launch was by a different MoaCube. One that already released a successful and well-received game, made proper press contacts and garnered some following. And yet, despite us having three times the amount of social network followers, the traffic we generated was over three times smaller.

How come? Well, I'm no expert on social networks, but I have enough experience to make guesses:

Reddit used to be a great way for small indies to tell the world about their game, but anti self-promotion rules cut it short. We did get some attention on niche subreddits like r/visualnovels and r/gaymers (our game has a gay protagonist) a few days after the launch, but it's a small thing.

Facebook, well, if you've been using it, you already know it sucks. Unpaid fanpage posts hardly show to anyone, and paid ones are pretty ineffective. We've actually got some traction on our announcement, but it was mostly my real life friends' stream of congratulations (thanks, guys!).

Twitter is the biggest disappointment. In Cinders' times, I've had less than 1k followers, mostly other indies. Today the number is 2.6k and includes actual players, the press, and a few internet personalities. My announcement tweet did pretty well with over 20k organic impressions but the result is still only half the visits of Cinders launch.

Interestingly enough, despite the much lower traffic, initial sales have been comparable to Cinders, which I find quite encouraging. I think that's where having an actual fan base that waits for your game truly shines. Still, it's going down fast, while Cinders managed to keep high sales for several days due to a steady traffic influx and press coverage.

Oh, this is going to be a short one. Here's a compilation of all the articles that appeared on Solstice launch day: 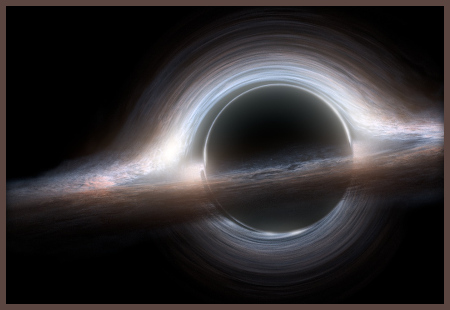 And again, before you go "Well, yeah, it's a super-niche game after all", remember that so was Cinders and it actually got covered pretty well, giving it some initial traction and legitimizing its existence.

You know what else got some nice and enthusiastic coverage? Solstice, when we first announced it. The press quotes on the game's site come from various previews and "games to look for" lists, as there were quite a few of those. Same outlets didn't even post a news about the launch, despite us reaching to most of them before the release.

I'm not that surprised, to be honest. Video game journalism is in a difficult spot right now, fighting an uphill battle against social media, user reviews, and the general overflow of new titles. Some cool sites we relied on simply died out or are in zombie mode, and the largest ones stopped covering new indie game launches, officially or not.

Additional depressing food for thought: Cinders got covered mostly by female journalist, as they seemed much more open to playing something different. When I updated my press list for Solstice launch, I realized that exactly 0% of my female journo contacts have remained in the industry. (And before you ask -- the dudes are still there). Ouch!

I don't like or want to toot the doom'n'gloom horn and announce the coming of indie apocalypse, like many of my peers did in recent months. Especially not so soon after a release. This is not a postmortem nor failure study.

I'm in indie games for 10 years now, and I know well that the market is in constant motion. It's natural, and you simply have to learn to adapt. I did this experiment to check what exactly has changed in in those last few years, and it appears that -- well -- quite a lot!

Mostly, as I already suspected analyzing our day-to-day numbers, it seems that your game doesn't exists unless it's on Steam. 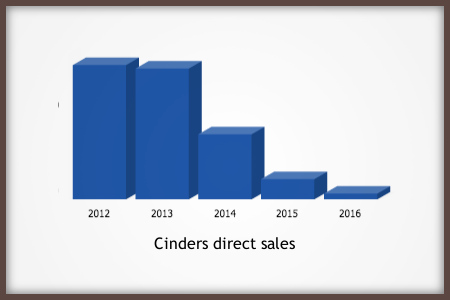 Guess which year it came out on Steam

I admit I don't like it. If a somewhat established indie, with a clearly defined audience and some following, can't generate enough traffic to live from direct sales alone, this means we're no longer independent developers, we're Steam developers.

Steam's discoverability algorithms are quite ruthless and prone to butterfly effect, and the system's so massive that it can't be affected externally (at least not on indie scale). To maximize your chances, you have to carefully target your games for the specific Steam trends and audience.

I worked on casual games for three years, and observed the same thing happen with the rise of the BigFish Games portal. As it converted more and more players to its customers, direct sales died out and it became all about hitting that BigFish's Top-10 bracket. PC casual evolved from coming up with a cool-but-simple mechanic to making one of those Hidden Object Puzzle Adventures that sell on BFG. It was largely the reason why my last employer Codeminion decided to disband despite financial success.

I don't think things are as bad with Steam, as it's much more cleverly ran, and its audience's tastes are wider. But it's time to accept that their monopoly is almost absolute in the world of indie PC gaming, and it affects us creatively too. I for one know that you won't see another visual novel from us soon. And while I still wanted to take a break due to genre fatigue, I'd prefer it to be at my own terms.

I'll definitely write more once Solstice arrives on our friendly neighborhood monopolist, and hopefully it'll be more uplifting. We aimed for an April release, but may push it sooner, depending on how things go.

If you want to know how we're doing in the mean time, consider adding me on twitter.

SIDE NOTE: When I posted this article on our site, it had more views in a few hours than our game during its entire launch day!