In 2020, we were approached by a developer with a game prototype. One publisher had already run their tests on it and immediately abandoned the project.
Milana Gelmanova
Blogger
July 26, 2021 In 2020, we were approached by a developer with a game prototype where users were supposed to match numbered cubes by swiping. One publisher had already run their tests on it and immediately abandoned the project, because the metrics were inconsistent – good retention, but low playtime, high CPI and plummeting ratings. Revenue-wise, that wasn’t a good combination.

To change the situation, me and Chain Cube developer Ignat Bykov had to completely reimagine monetization, polish the game design, and conduct dozens of other experiments (which weren’t always a success). Here the iterations the project went through to get to the top of the stores, bring in $500,000 in the first months of scaling and stay profitable so far. We hope that other developers will find this information useful as well.

First impressions, or the “it could’ve been better” stage

When I first saw the project and its metrics, it was abundantly clear why many publishers would turn it down: CPI > $1, 2-star rating, annoying monetization, and the list kept on going. But, in my opinion, the prototype had all the aspects of an ideal hypercasual game:

All these factors combined make for a nearly perfect time killer game.

Besides, the developer was a fan of mobile games and was very passionate about game development.

Ignat Bykov, Chain Cube developer: “I became fascinated with the hypercasual genre when mobile games just started getting popular. It was a good excuse for a solo developer to learn Unity. I worked on prototypes at night and tried sending them to publishers, but my attempts weren’t very successful. Here’s how it happened: you send a prototype to a large publisher, and the robot responds with test metrics. If the metrics aren’t good enough, you try to figure out what to fix on your own, or you start a new project. As a result, none of my games were acquired by publishers.

Then I wrote a prototype for Chain Cube over the Christmas weekend and it seemed very playable. Someone told me about a publisher from Europe, and I sent them the build to run tests on. The retention turned out to be good, around 39%, but the CPI was quite high and the playtime was questionable. Finalizing the project was possible, but they flatly refused. Then I was introduced to Azur Games".

First tests. People like it, but it gets annoying

We tested the game on iOS, and the metrics looked like this:

At this stage, the main problem immediately revealed itself: long-term retention suffered greatly because of Interstitial ads that were basically forced on the users. An ad popped up every 45 seconds, it was annoying and very predictable.

The players weren’t getting any rewards for succeeding, there were no leaderboards or boosters to help the players who don’t want unnecessary complexity. From that moment on, we worked on improving gameplay and metrics.

Jumping ahead, it took us six months from the first tests to the launch of a full-scale ad campaign. We introduced more than 50 gameplay updates over this time: got rid of forced advertising, added boosters, reward placement, new cubes with larger numbers, different starting locations, and worked on the overall look of the game.

Now, let’s talk about each step, including the unsuccessful ones, in more detail.

The most dramatic growth in metrics happened when we changed the monetization system. Previously, a coin popped up every 45 seconds. By tapping it, the player launched an Interstitial. As a result, the App Store rating dropped below two stars.

Right off the bat, we improved the integration for Interstitials and made them less frequent. In parallel to that, we added incentive windows. They appeared after some achievements to motivate the players to stay in the game and achieve better results. For example, one of the windows popped up when players created cubes with large numbers.

Leaderboards also helped. They were added as a way to cater to the players who were looking for a challenge without affecting those who wanted to play just for fun. We also experimented with the game visuals – as a result, the background became softer and nicer-looking, because the initial bright colors blended in with the cubes and interfered with the gameplay. 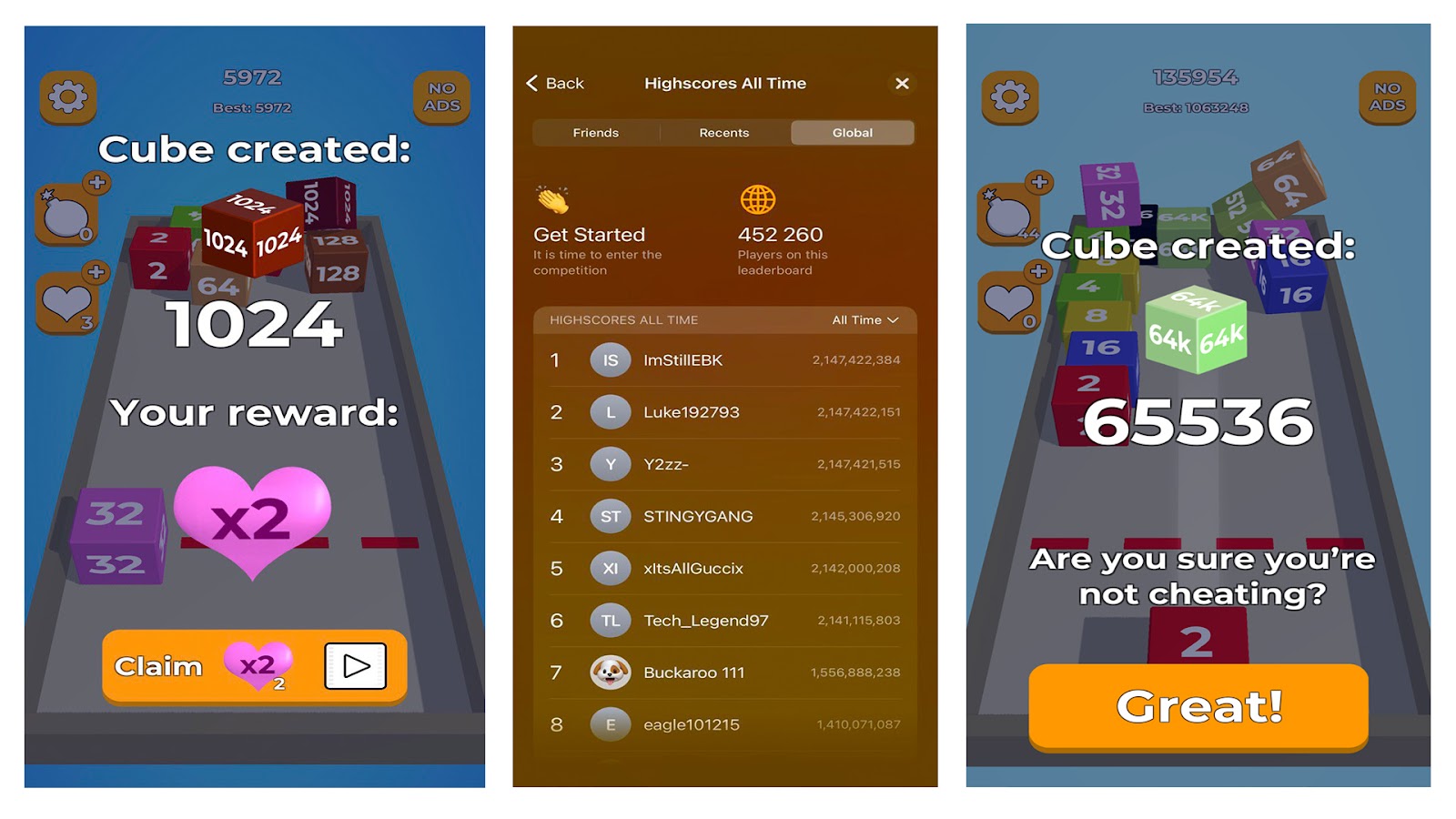 The goal was to implement every improvement possible at this point in time and launch a large-scale ad campaign. Everything worked out according to plan, user acquisition scaled rapidly, and the project quickly reached real profits after the acquisition.

Other successful changes we made:

Naturally, it’s impossible for every theory to work, and we had unsuccessful iterations as well. We rolled them back, but they helped us understand our audience better.

We’ve experimented with difficulty levels a lot, and we have a long way to go because users are very sensitive to any changes in this department.

We got caught in a paradox: in the reviews, some people said that the game was too easy for them, but the increase in difficulty caused the metrics to decrease. We explored a lot of options – made the cubes get bigger as the numbers on them grew, leaving the player less room for maneuvers; added earthquakes that shuffled the field; added more cubes to make it harder to hit the right one. Yet, most users weren’t having none of it, and the metrics immediately got worse.

That’s when we realized that our target audience doesn’t want to be challenged – they’re just looking for something nice to pass time and relax. To verify this, we ran three iterations with difficulty upgrades and none of them worked.

Changing the controls from swipes to taps didn’t work either. All metrics decreased, both playtime and LTV.

Rounded cubes, soft cubes, and skins didn’t get a warm welcome as well. We tried using different objects instead of cubes, but there were problems with controlling them. It became more difficult for the players to set records, which was discouraging.

Ignat: “I've been working on the skin store for quite a while – things like that are often well-received in hypercasual. I’ve created a plethora of ​​options to choose from: balls, toys, little men. But it turned out that people are uncomfortable with everything except cubes. The objects didn’t fit well on the field, which caused people to leave. I was building the store for about a couple of months, but in the end it didn't work at all".

Now we’re planning to wrap all this up into something close to a meta with several-day-long events that players could complete in order to get an achievement. We will also change the levels, add backgrounds and different settings.

Ignat: “We even tested things like the size of the numbers on the cubes or the colors of the cubes. Or, an icon for the store – I made more than a hundred options".

The icons have an interesting story of their own. The big cube with the number 2048 outperformed everything else. Ever since then it has become something of a challenge for us to make an icon that would perform even better. But every time someone tried to do something new, nothing changed. I think, as soon as all the keys and the Chain Cube itself were indexed, the icon became a part of the brand. Later on, users started to perceive any changes negatively. In the end, the original version still reigns.

Right after the first iteration, there was a large increase in traffic caused by the new monetization system. It became clear that the project could be soft-launched and there will be sizable user acquisition and profits. But, the volume of acquisition and promotion opportunities is a whole different thing. We wanted to maximize this effect at launch by using high LTV. Chain Cube users have been playing the game for a very long time, some of them have been with us for about a year, thanks to the experiments and gameplay improvements. But let’s get back to marketing.

After a boost in metrics, we began experimenting with user acquisition on a large scale. More often than not, this means you have to be the highest bidder at the auction. The more we raised the stakes, the better the result was. We didn’t aim to buy more users at the lowest price possible, we wanted to buy the best users, whatever the cost.

We figured out that gameplay features motivate the players to make in-app purchases and pay to turn off the ads. At the same time, the in-app conversion rate was higher than on our other projects. It was interesting from the point of marketing growth, because we started to acquire the paying users separately. We were monitoring behavioral triggers – hypercasual was taking us deeper than we could ever imagine it would. We studied sequences of user behaviour and what triggers them to act.

We quickly realized that you can grow a lot, but it takes time to build user retention, so we’re growing gradually. We’re also working on adding new in-app purchases to further increase LTV.

After the major updates, we focused on improvements and new tests, especially for the marketing creatives and ASO.

First step is using gameplay videos in order to research the audience and understand the real metrics of the project — creatives like that perform well worldwide.

During scaling, both memes and misleads show promising results, but you need to be careful with them, as they can receive different reactions from players. The important point is that even with low retention from misleads, ROAS can still be good enough, depending on CPI and player behavior patterns. For example, players might have low retention but focus heavily on watching ads to get rewards. So, one pattern of behavior compensates for another.

There was an interesting case with the creatives. Our marketing team came up with an effect that we implemented into the game. They designed a new cube merge effect and, after we implemented it, the players liked it so much, the playtime grew by 15%.

Version with the effect on

The only thing wrong with it was the way we initially implemented the effect, it prevented players from setting records. We made it a little softer, removed bright flares and figured out the mechanics that would prevent the player from losing at the finish line because the cubes are increasing in size when they merge.

All tests, both successful and not, helped us understand our players better and only keep the things they liked.

This is how the metrics have changed after all the updates in six months.

It’s a lot, but these numbers provide serious rates of return. CPI pays off with LTV, as the user keeps returning to the game for a long time. There’s even a small percentage of users that have been with us from the start. While we predicted a 90-day ROI, some users have been playing for more than 180 days.

I want to say that the Chain Cube case made us take a fresh look at the whole genre.

Ignat: “The great thing about hypercasual is that people are very eager to explore new mechanics. This idea is not often repeated, but it is very important. The amount of new mechanics invented for hypercasual games is about the same as the number of mechanics invented at the dawn of game development in 1980s Japan. Despite its apparent simplicity, this is a major leap forward for game design. From time to time it leads to weird games like nose hair pulling simulators, but at the end of the day, it still benefits the industry".