A great part of the Game Industry is how open it is for developers these days. But with issues of quality coming forward, should there be standards for what constitutes a game release?
Josh Bycer
Blogger
December 02, 2014

The number of games being released these days has exploded and not just on the mobile market. Digital distribution and the power and usability of game development tools mean that just about anyone can make and sell games in the Game Industry.

And while this has certainty given us a huge variety of games, we are seeing more examples of the "straight to DVD" quality taking up store space, early access and crowdfunding. The Game Industry like any consumer driven industry lives and dies based on consumer confidence and leads many people to wonder if steps need to be taken to restrict games from being sold.

While Valve with Steam is considered to be the #1 digital store and a boon to all PC game development, they are also the biggest target when it comes to pointing out any problems with the model.

Steam has grown so much over the years and Valve is famously known for experimenting with crazy ideas to see what sticks: big picture, sales, trading cards, greenlight etc. And Valve has certainty had more winning ideas than losers, but when it comes to fixing a problem they are notoriously slow on the take.

Greenlight originally started as a way for Valve to let the community decide who should be allowed on Steam after being flooded by developers and game requests. And while this has led to some great games finally getting on the service like Drox Operative or Cook Serve Delicious, we're still seeing developers get around what is supposed to be a quality measure.

I've heard stories from people who had "known a guy" who worked at Valve or a friend of a friend who has helped someone get moved up on the list or circumvent the need to be critique and get their game on Steam. And now with Early Access things have gotten out of control. There are reports of games that are being abandoned, not being anything like what was promised and gamers being left with a product that is of poor quality.

Valve's defense of “buy at your own risk" is one of the rare times where I can call them idiots. Steam is supposed to be the premier digital store and that title should come with a level of consumer protection. Any store knows that you need to have guidelines in place to protect the consumer from faulty products that are missed at the inspection level.

If I buy meat that is spoiled and take it back to the store, do you think they would ever tell me that I should have known the risk buying from them? Hell no, and I would be compensated for the trouble the store and the company that sold the meat put me through.

Whether Valve likes it or not, Steam is not this magical product that is put on a pedestal and separate from games like The War Z, Air Control and others. As a storefront, Steam is the middleman between the people making games and the people buying them and they need to be held accountable. 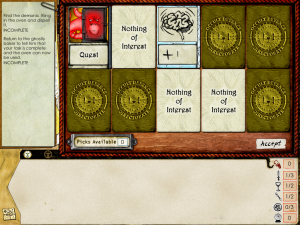 Despite making great games, Cryptic Comet has had nothing but bad luck trying to get onto Steam while crappier games slip right on by.

Just like Nintendo having the “Seal of Quality" back in the NES days, Valve needs to have some level of consumer protection and quality for Steam.

Every game that is put on Steam, from a multimillion dollar AAA game to something made by three people, is attached to Valve and Steam's brand.

GOG unveiled a 30 day money back guarantee on any product that doesn't work for someone. And as of right now, they are the only store that I know of that has any kind of return policy on digital items.

With dozens of games being released weekly, it's unfair to assume that Valve can inspect every one of them rigorously. This is why Valve had such a heavy vetting process with new developers to make sure that they are on the up and up. And once someone was accepted onto Steam, they then had a much easier time putting any subsequent games on the platform.

This by the way, was how The War Z developers were able to get on Steam so easily having released a previous crappy game and suckered people out of their money. And to make the story worse, the developers re-released The War Z as Infestation Survivor Stories in an attempt to convince people that it's a new game. And while something like The War Z was easy to judge as crap from one look, is it possible to set industry standards?

As we've talked about in the past, one of the best and innovative parts about the Game Industry is that we are not centralized. No one needs a license to make video games and even the term "video game" can mean multiple things for different people.

And this makes it difficult when it comes to talking about reigning in game developers. Should we say that all video games must have at minimum two hours of gameplay and no less than four game breaking bugs? Speaking of technical issues, should a developer be held accountable if someone buys a game and didn't read the technical specs? And what about pricing? Can and should we set pricing standards based on how much content a game has?

Another problem is that despite Steam being the biggest store, there are other ways to sell video games online. Sites like GMG, Humblestore, Origin, UPlay etc. Not to mention the hundreds of games that are sold directly through the developer's site. If we crack down on Steam, then it is only fair that the other stores and sites are impacted as well. 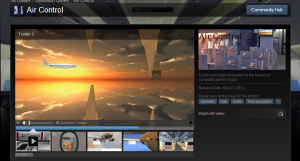 Air Control is another quality control nightmare for Valve, allowing something so broken and poorly designed onto Steam.

It's a very slippery slope and is why most people prefer "The Wild West" approach when it comes to the Game Industry.

With that said however, I do feel that hiding behind digital stores and products is not good for the overall state of the Game Industry and that there should be checks and measures when it comes to video games.

Valve is known for having their mysterious “refund policy" which supposedly everyone gets only one of but I think there should be an actual refund policy. If a game doesn't work then yes they should be able to get their money back. And I also believe that trading digital video games should be allowed but that is an argument for another time.

With early access, there needs to be some level of accountability for developers who are using the program as a way to make development funds while working on the game and accountability for Steam being the store that these games are listed and sold on. Again if it's on Steam regardless of being a full product, greenlit or early access, they all have to adhere to some measure of quality.

The catch of having a decentralized industry is that while no one is held to a standard, everyone is treated equally. You may have a great game on Greenlight, but if there are two dozen shovel ware games in front of it, no one is going to be able to find you. Same goes for Kickstarter and Early Access, just because you are doing things by the book won't stop people from lumping you in with the people who aren't.

This is one of those problems that is bigger than what people realize and is something that needs to be taken care of sooner than later. Consumer confidence is everything to the Game Industry and every story of an early access game failing, kickstarter not meeting promises or shoddy game being release shakes that confidence.

The Video Game Industry crash of the 80s was in one part due to the consumer confidence dropping out as no one trusted the game developers to put out quality products and not try to rip people off. And shows the danger of not having some measure of standards when it comes to putting out a video game.

A few years ago, Stardock tried the Gamer's Bill of Rights and while they arguably did not hold to that standard after the Elemental disaster, I still think that a mandate like that would be a good idea. The Game Industry is no longer this tiny niche market for enthusiasts only. But a multibillion dollar industry that has taken the world by storm. And while our industry is all about fun and games, we still need to be serious sometimes.

(For more posts on the game industry and design along with weekly podcasts, check out Game-Wisdom)