At Nintendo in 1984 I created a list of twelve criteria I thought were key for arcade video games. For our games to engage and retain players, they needed to score high. A similar method could be useful today to focus developers on what matters most.
Jerry Momoda
Blogger
February 25, 2015

An excerpt from “Methodologies to Analyze Classic Arcade Games”), at jerrymomoda.com

Those within the business understand video games are more than design, coding, artwork and sound. There are people dedicated to game and business analysis, contributing to key business decisions and working with designers to optimize the user experience (UX).

My interest in game analysis began in arcades during the early 80s. While waiting to play I would chat with other players. But mostly I watched. I compared their learning curve to my own. How quickly they learned, where difficulty and frustration occurred, and if rewards were used appropriately. Being able to translate my observations into actionable items, helped me better understand the user experience. By being a voice of the player, I could to help teams make games that would be played over and over again.

In 1982 I met Nintendo of America's VP of Marketing, Ron Judy while playing Donkey Kong. He arranged for me to meet with Mr. Arakawa over a then test game called Donkey Kong Junior. He asked I visit Nintendo the next day and show the company how to play. My demo and game analysis while the company watched earned me a job. Hired on the spot, it remains as one of my best days ever.

The industry was impacted by the “North American Crash of 1983”.  Devastating for the console industry, its effects sent a shiver throughout the coin-operated games business as well. The 1984 AMOA Show revealed the shift from only dedicated games to include "system" and "kit" games. This placed a focus on lower capital investment with a faster "return on investment". Hopes were that game operators would more frequently reinvest capital into new games.

Our competitor’s games often influenced the performance of our own. And while we had no control over them, we could learn from the games they made. Analyzing why certain games are popular has always been interesting to me.

What criteria were common amongst the highest earning games? What criteria were most important? I created a list of twelve I thought were key. Each was scored from low (1) to high (5). With a total score, I could quantify and compare one game against others. Though subjective and far from perfect, I felt it was a step in the right direction. 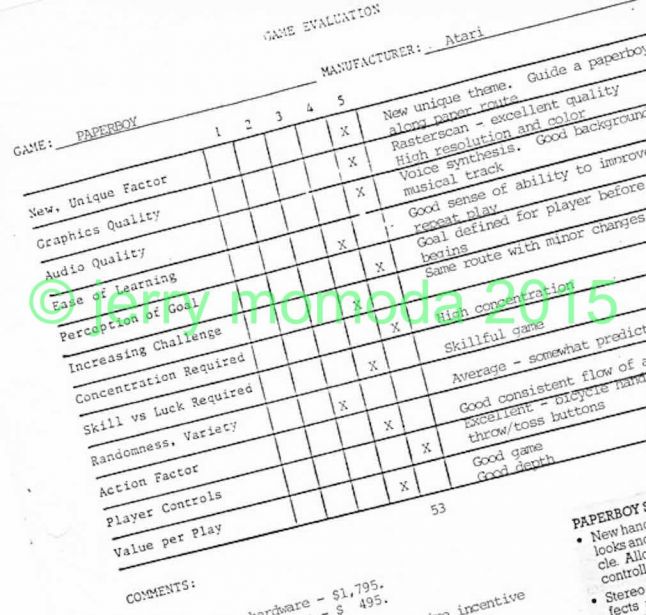 I used a rating system in my game analysis of 23 games, using the following criteria:

High-ranking games at this 1984 show included Atari/Paperboy and Data East/Karate Champ. Other games like Sente/Hat Trick and Snack 'n Jaxson also ranked well because of their low capital investment and perceived fast return on investment. System and kit games, strapped to a common hardware had their share of challenges competing against the rapidly improving technology of custom dedicated hardware. Most of these have disappeared into obscurity.

The motivation for this post came after reviewing some of my work from thirty years ago. Far from perfect, I realize there is room for improvement. For starters, I could have modified my list of criteria and weighted some more/less than others. However, I believe that it can serve as a framework for arcade and mobile games today.

As a further caveat, these methods were based on my experiences from 1982 - 1985. Without prior experience in a new industry, still thought of nothing more than a passing fad, it really was the "wild west". I analyzed what I felt was important with the tools that I had.

Today game analysis involves analytics, with access to more data than anyone could ever want. User research and gamification make games out to be more science than art.  Criteria I refer to as "easy to learn", "perception of goal", "concentration required", "randomness & variety" now fall into the categories of engagement and retention.

Perform your own game analysis. Analyze your own game against similar games today and yesteryear. How do they measure up? Define your own key metrics and the criteria you deem necessary for a successful game. Each genre will have different metrics.

Or use such a tool as a means to identify what’s important for success. Then use it to help keep a game on track. Working on a game for months (or longer), yet being able to stand back and view as only one of thousands of choices isn’t easy.

It’s the rare indie who can objectively view their game through the fresh eyes of a consumer. This is a worthwhile check-in that should occur through multiple points during iteration.

This is the second half from my post titled “Methodologies to Analyze Classic Arcade Games.” It was written for Game Analysis, at jerrymomoda.com. The first part describes methods I used to analyze classic arcade games. Japanese development teams used the information to understand American players and make better games. I hope you find it interesting.

As an advocate of engagement, if you're reading this...mission accomplished! I'd love to hear your comments.