Controversy In The Classroom: Whose IP Is It Anyway?

Students at game schools are producing award-winning games -- but who owns them after graduation? Gamasutra talks to IGF-winning creators, attorneys and game schools on the controversy.
Game Developer
Staff
November 13, 2008

Graduates of schools that teach game development and design may have a leg up on others trying to break into the video game field... in many cases they created as classwork a game that could stir the interest of a studio or publisher.

But wait! Whose IP is that game anyway -- the student's or the college's?

At least one leader in the field -- Redmond, WA-based DigiPen Institute of Technology, which has produced  multiple award-winning games and the team that made Narbacular Drop and went on to create Portal for Valve -- says it's theirs.

While DigiPen is not alone in this rule, with major schools such as The Guildhall @ SMU also enforcing the rule, the majority of educators and others interviewed for this story took issue with that practice.

"I don't want to sound hokey, but this is a moral issue," says Vashon, WA-based Tom Buscaglia, who refers to himself as "The Game Attorney." "What you've got here is an institution that, while it claims to be there to teach and help unsophisticated students, is having them sign over ownership of their work. And that, to me, seems morally reprehensible which, frankly, is what's driving me to speak out -- my moral outrage."

What is also driving Buscaglia to speak out is that he represents Zach Aikman, president and co-founder of Seattle area-based studio Fishbeat, who is also a Spring 2008 DigiPen grad.

Aikman was one of four students at DigiPen who, for three semesters, developed a music-based shooting game for the PC called Synaesthete that won the best student game award at the 2008 Independent Games Festival, took second place in the 2007 Indie Game Showcase, and was a finalist in the Intel Game Demo Contest.

While Aikman and his team created the game with no intentions of publishing it -- since they were well aware that the school's policy was that it owned all IP developed there -- shortly after their game started winning awards, they began to be approached by publishers who believed the small casual game could easily be digitally distributed and sold for $5 or $10 a pop.

"We knew the school owned the copyright on all the art, the assets, and the code," recalls Aikman, "but you can't copyright play mechanics. So, after we graduated, we began talking about taking the game concept and starting from scratch with different code."

"We decided to incorporate, start a studio, and while we couldn't sell Synaesthete as it was, we hoped to use it to showcase our talents and try to talk some publishers into getting some funding to create something new."

What irks Aikman is that, after graduating, he and his team approached DigiPen, hoping it might change its policy and make an exception for the award-winning game, but the school wouldn't budge.

"They were dead set on not setting a precedent because, if they let us keep the IP, they were afraid other students would want the same. But I believe there's something wrong with the idea of DigiPen owning games it has no intention of doing anything with, while discouraging people like me who could really make use of our efforts and use it as a springboard to a career."

"It's like going to an art school and creating a painting while you're there. Does the school own the art that took so much of your time and effort? I don't see why the same thing shouldn't apply to games."

In another controversial IP ownership-related event in 2007, Slamdance Games Festival finalist Toblo withdrew its game from the event "on moral grounds" due to the removal of Super Columbine Massacre RPG from Slamdance's line-up. But DigiPen "overwrote our decision and readmitted Toblo to the Slamdance Festival", according to Toblo's creators, with its ability to do so technically due to its IP ownership of the game.

However, Claude Comair begs to differ. Comair, who founded the privately owned DigiPen in 1988, is its president and one of its owners. He is also a co-founder of the Nintendo Software Technology Corp., a division of Nintendo of America.

"Our policy, which has been our policy since day one and which is laid out in our student agreement, is very clear -- everything that is done within the school and presented as homework or as a product to be judged by a teacher ends up being the property of the school. IP, code, artwork, everything," says Comair.

"And, as a matter of fact, in my opening speech, I tell students that if there is something dear to them, they should not present it as homework."

That policy, Comair explains, isn't a casual one and, he feels, it has helped the school avoid many problems, especially misunderstandings between DigiPen and the games industry.

"We are not here to compete with the games industry," he says. "We are not here for people to come and make a game in a less-expensive manner utilizing equipment and software that has student licenses."

"Just as importantly, we are not equipped to properly firewall our projects in the sense that we really don't know legally speaking how many or which students created which games. We don't know whether they received input from other students who have not been credited."

"These are just a few of the reasons why we have this policy," he adds, "but the bottom line is that DigiPen has never sold any of its students' games nor do we intend to. Nor have we made any exceptions for students who tried to convince us to do so. They have come to us with so many very creative arguments that I recently had to say to them 'Please don't come anymore. I have your best interests at heart and I want you to go find good jobs after you graduate. But I simply cannot make exceptions.'" 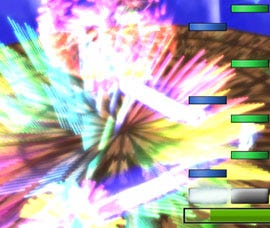 Similar policies exist in the private sector, of course, and developers are often asked to sign employment contracts saying that "essentially, anything that comes out of your brain -- whether at work or at home -- belongs to the studio," says Jason Della Rocca, executive director at the International Game Developers Association (IGDA).

In other words, he explains, some game companies insist that they own, say, the assets produced by an artist during work hours and the artwork that they paint in the evenings at home.

"Some studios are particularly onerous in that regard," he says, "and that is something the IGDA is working to change. But that's a very different situation from this academic context since presumably design schools have no interest in monetizing students' projects the way a studio might."

Della Rocca admits he was unaware of such policies at DigiPen or any other game school. But Brenda Brathwaite is well aware of the situation. Brathwaite is an independent game designer, chair of the Interactive Design and Game Development Department at the Savannah College of Art and Design, and a member of the IGDA board of directors.

"I can tell you that I know students who have been heavily demoralized by that policy," she recalls. "I don't know enough about why other schools have the policies that they have, but I am damn glad we have the policy that we have -- which is that our students have 100% rights to their work. That's a policy that's always been very attractive to me and it's one of the reasons I'm teaching here."

Similarly, Susan Gold says that she would never associate with a school that didn't allow students to own their own work -- of which DigiPen is just one of a number worldwide.

Gold, who believes this is an important issue but not one that has been broached by the IGDA, is the chair of the IGDA's Education SIG, as well as the international development manager of the Masters of Digital Media Program at the Centre For Digital Media's Great Northern Way Campus in Vancouver, Canada.

"My personal view is that students ought to retain the rights to their work," she says. "At schools that don't have that policy, typically students know that before they enter the school so really no one should be taken by surprise. I just think that it's a shame that the policy exists. I don't believe work should belong to anyone but its creators."

Asked whether she expects the IGDA to tackle that issue, Gold replies that "university policy is usually very hard to change."

However, she expressed curiosity about what other members of the IGDA's Education SIG feel about the topic and she posed the question online to her listserv roster which, she says, includes "educators around the world."

Here are a half-dozen typical responses from the 30-plus she received:

While it wasn't clear whether the IGDA's Education SIG would take up the issue, DigiPen's Comair says that a policy change is not out of the question. "Students come to DIT to learn and get the most out of their education, not to ship a game they created at school for profit," he says.

"We are a school, not a production house, and therefore our goal is for the students to gain the knowledge and experience they need to be successful in the field. We may lose students based on our IP policy, but this is not as important to me as is maintaining the quality of the education.

"I am not saying that we will not change in the future," he adds. "But, in order to do that, we need to talk to the industry to see what they feel would be best. Our program advisory committee is made up of the best of the best companies in the world. So far," he says, "they are very happy with our policy."