I’d like to share my personal experience with the development of the video game project COMA: a mind adventure. This is an example of how much external circumstances can shatter years of work, even in small and united teams.
Dani Navarro
Blogger
August 05, 2014

The creative adventure that ended up in a coma.

I’d like to share my personal experience with the development of the video game project COMA: a mind adventure. This is an example of how much external circumstances can shatter years of work, even in small and united teams.

I’m Dani Navarro, co-author and co-director of COMA: a mind adventure. I am used to having my work talk for me, but this time I felt obliged to write this post-mortem with a focus on the creative and artistic side of the project. I hope you can take something good out of my experiences, in particular if you are starting in the world of game development and got scarce resources.

I’ll start from the very beginning, like all good stories. But before that, let me share a brief description to introduce you the project.

A climatic incident sets the player in a long state of coma, forcing him to grow up while trapped inside of himself and search for his own redemption. All he sees is a representation of the feelings and experiences of the main character. He did something in the past that’s haunting him and will try to find a way to forgive himself. That redemption is represented with the arrival of a huge tree.

There are several layers to this message but the most fundamental is “every decision has its consequences”.

The player has the ability to change the weather and time in order to solve puzzles that are integrated in the environment.

Our references were games such as Dear Esther, Portal 2, Shadow of the Colossus and Journey. 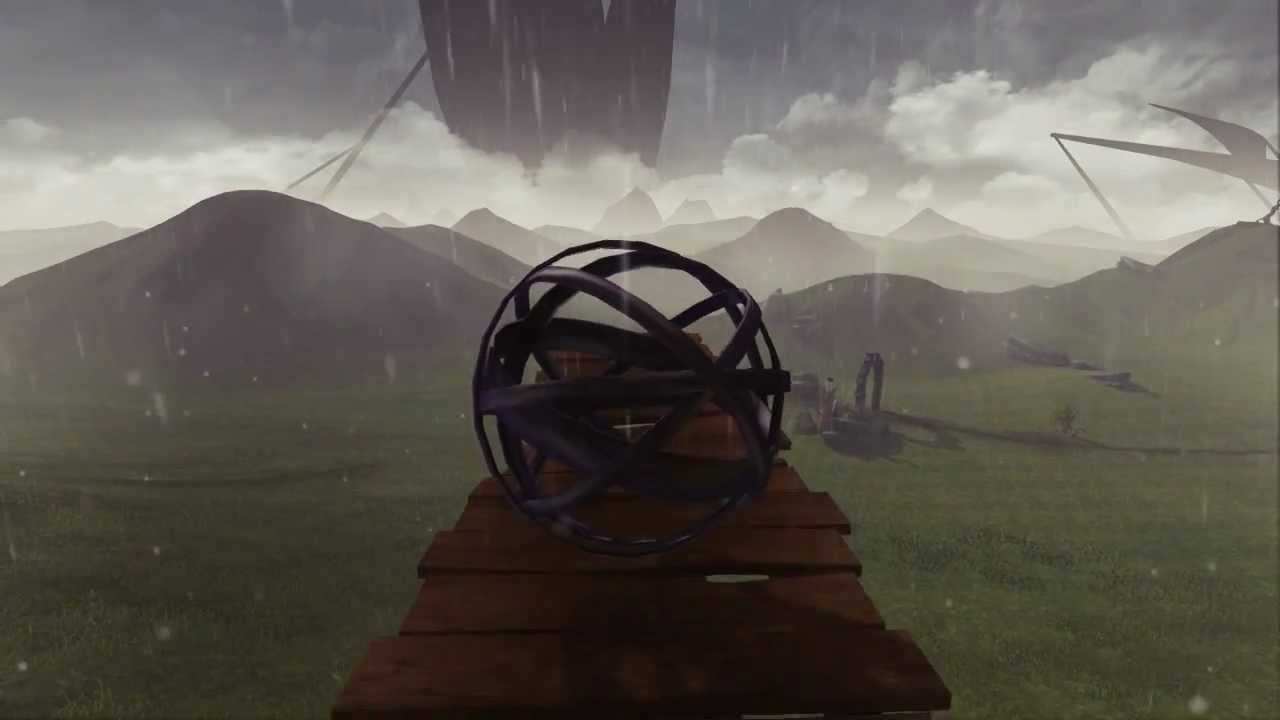 That said, let’s start with our story:

Initially we were only two people in the project, Carlos and me, both equally responsible for the game’s authorship. But as it evolved, we have been getting significant support from many other people. Our first work together as Warcelona, a Left4Dead mod that was very well received by players and critics alike. After this, we decided to take the far riskier step of creating a project from scratch. Thus, my partner, who had better coding skills, started evaluating which game engine would be the most suitable for the game. Finally, he decided to go with Unreal Engine 3 and contacted me with a tech demo to illustrate what we could do.

What did we want to represent with this video game?

From the very beginning our roles were clear: we both were authors of the project. In general, we kept a multidisciplinary work dynamic, Carlos mainly focused on programming and puzzle design, while I was the one in charge of the art direction and creative decisions, including the script. But we kept a very close dialogue and continuously gave feedback to each other about our respective work. As Carlos said: “[...] I can also do some work on the script and he can also make some 3D models or level design or come up with ideas on the fly, that’s something I consider very important [...]”.

The initial premise was clear for both of us: We wanted to capture the point where the medium is today. As time goes on video games can deliver more mature experiences and are less afraid to deal with adult topics. My main interest was, as in every project I work on, the possibility to explore and improve my skills.

During the brainstorming stage we considered different scenarios of where the game would be set. One of the strongest contenders was proposed by my partner Carlos: His idea was about a military laboratory, nazi experiments and the like. I thought it was a bit limited and not original enough to catch the attention of our potential players. Also, it wasn’t aligned with the experimental and mature philosophy we had envisioned for the game. So I went on to think about further possible environments that would allow us to create an artistic game, both attractive and carrying a deep message. In the end I came with the idea of having the main character lie in a coma and setting the game world inside his own mind. This, on one hand, would imply that the world is imaginary, but on the flipside also allow the player to enjoy plenty of freedom, as opposed to most video game stories, in which one has to fight to survive. In this comatose state, the mind of the player is his own and only enemy.

As my partner Carlos said “[...] thanks to Dani Navarro, my colleague working on Coma, we were able to fix [the gameplay] and without that the project couldn’t have progressed [...] Dani threw away the nazi lab experiment stuff and came up with the idea of having a character lying in a coma, with a coma there wouldn’t be any limits [...]”

We only needed to place some memories in the main character’s mind, something like a family drama that would have caused him to enter a coma, and that way we would be able to create drama and tension in the story.

As the gameplay was originally based on day and night cycles, in a way turning the surroundings into another main character, it came to my mind that it would be nice to add an environmental/climatic component to the game as a key element.

And that is how COMA was born, as a project that took over two and a half years to make and with its context closely tied to its development.

On the 11th of June 2012 we launched Coma on Indiegogo, which is a popular crowdfunding platform. Realistically speaking and knowing our poor marketing resources, I was aware that it would be difficult to reach the very specific audience for our game but at the same time we had so much to win and nothing to lose. 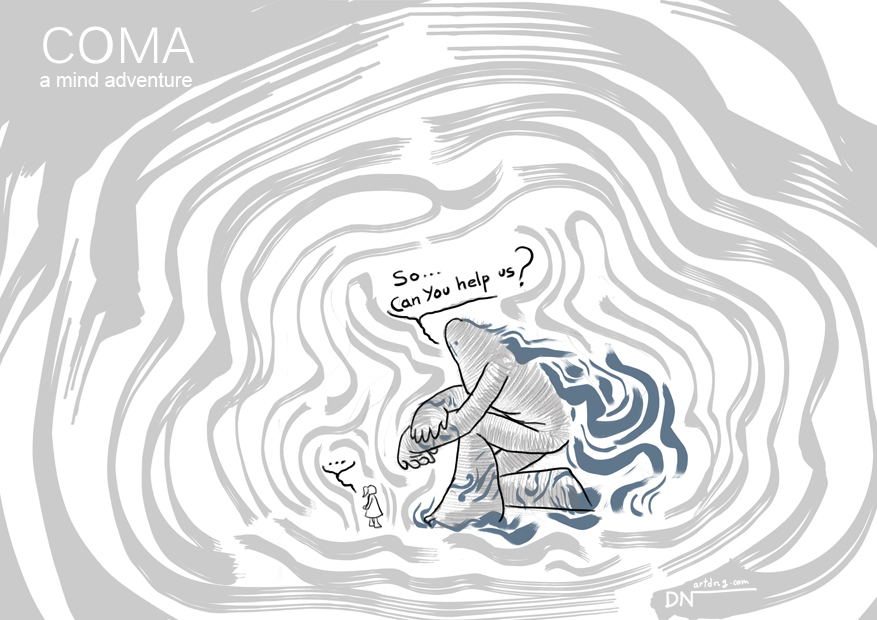 Illustration to promote the campaign on Indiegogo based on a childlike drawing.

The response was much larger than we could have ever expected and many websites talked about the campaign (PCGamer, GiantBomb, GameElitist, Vandal, Hobbyconsolas, OnlySp, among others). Some of them were even interested in interviewing us. We got the support of over a hundred backers (whom I will be always thankful to) but sadly for us the raised money wasn’t enough. This did not discourage us and we kept fighting to turn our ideas into reality. The good vibe received from the media was more than enough for us to keep moving forward. 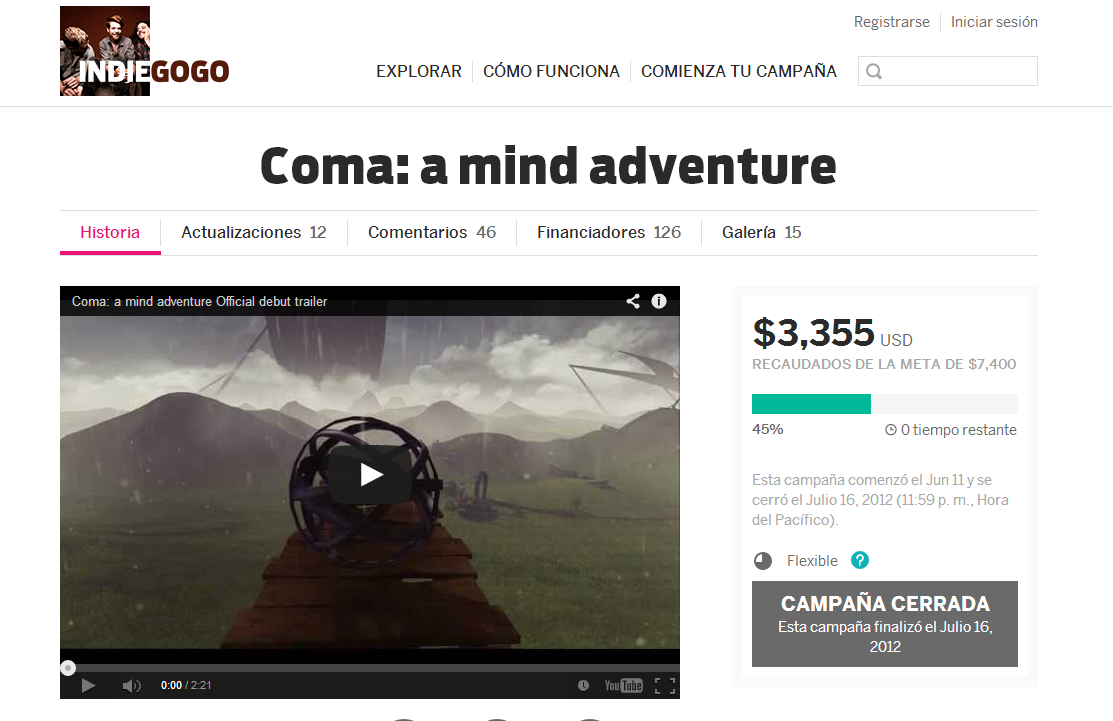 Why didn’t we gather enough support to fund our game? In my opinion our biggest failure was that we rushed the launch of the campaign so that the game wasn’t ready to fully showcase what the final experience would be like. We got very nice comments praising our courage and our adult approach to the game’s development in creative terms. I strongly believe that with two extra months of development we would have made it.

How to continue development without money.

We had to simultaneously keep working our day jobs and develop the project. It was hard. Personally, I had to reject several job offers to be able to dedicate the necessary time to Coma. Each one of us worked from home and it wasn’t the ideal way to do it, but at this point there was no other option. The discipline to force ourselves to keep in contact on a regular basis was important to us. However, at times it wasn’t as fluid as it should have been for a project of this size (which became even worse considering we both wanted to take part in every single aspect of the game). Still, overall it went well.

Before going into details, it’s important to define each aspect of the main character as detailed as possible: Who is he? Why is he like this? What does he want and what is he escaping from? What are his weaknesses and strengths?

For me, the best part of the story resides in how solid its premises are. That way we could overcome mistakes cropping up due to the game being rushed. Some problems emerged quite often: lack of funds, changes in the gameplay, needs of all kinds. However, when a solution was found we always managed to integrate it logically into the game.

In general a story based around a family drama looks simple but it gets quite complicated quite quickly when you try to deal with the complexity of human feelings in a game. At first glance the human mind looks like a flexible creative canvas where everything is possible, but everything turns out extremely complex when you try to give a meaning to it all - something linked to facts.

An important point in every game story is that it shouldn’t obstruct the gameplay. In a game of this kind it wasn’t difficult since our target audience would probably enjoy a purely narrative experience. However, we wanted to let players with different preferences enter the world as well and be able to focus solely on puzzle solving if they wanted to. To reward these players and make them still understand the story completely, I thought it would be interesting to enhance their experience and offer the story as a puzzle itself, larger and intangible.

Our lack of resources was the most crippling drawback we had to deal with during the first stages of development. We were continuously testing the ground to see how far could we could get (for example, when integrating the narrative into the environment itself). Since we were talking about a very personal story, it’s extremely important that the player feels a connection to the in-game characters. My experience in short film production allowed me to create a few videos using real images that helped to humanize the protagonists (even if the player could never see their faces, the visual change between video-reality and video-game-mind was justified/explained). However, I didn’t want this to be a static resource, so I suggested to my partner Carlos that he should find a way to not only use walls and rocks but also integrate the videos into the game environment as simulated memories so both could serve as a canvas into which messages and symbols could be carved. 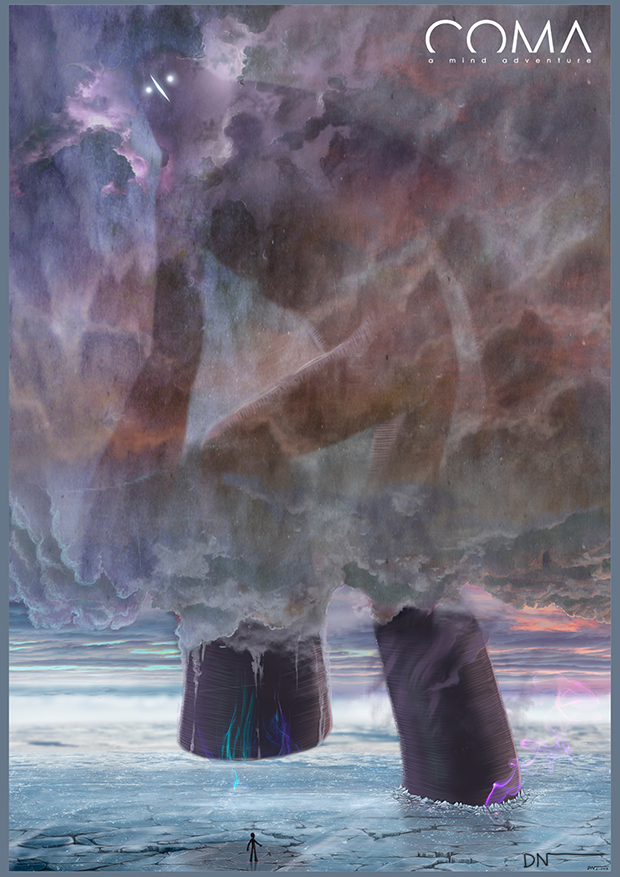 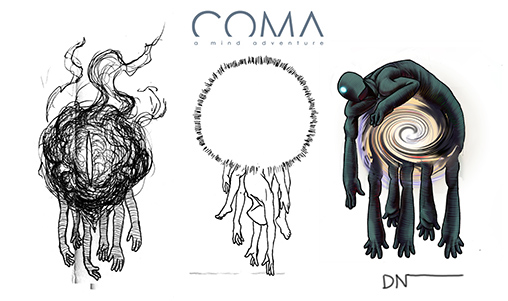 I designed the concept arts above illustrating the visual aspect of the fight against the giant. On the right, minion design is represented.

We couldn’t animate characters to use them (for example) as narrators and empathize with the player. To solve this issue I came up with the idea of using drawings. The our main character’s obsession was the feeling of guilt about a little girl that also provoked a feeling of tenderness towards her. The solution was a childlike drawing she made which could be seen floating in the scenarios of the game and represented a promise she made.