In this post I cover three areas on which we've spent significant energy since the launch of Wolf Toss: device compatibility, gameplay tuning, and economy tuning.
Mike Arcuri
Blogger
February 23, 2012 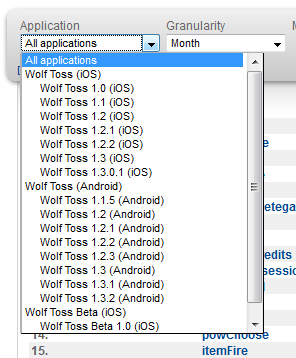 No matter what game you are making, plan for post-launch efforts:

It's been 75 days since we released Wolf Toss, and the studio team is working on updates to the game right now.  We've done 14 mobile releases since 1.0 and we have at least one, more likely two more releases planned after we finish the v1.4 release that the team is currently working on.  For those of you who've done online titles before, this might seem like par for the course, but we're talking about a single-player mobile physics puzzle game in which all of the actual gameplay takes place on the client devices.  So indulge me in a blanket statement here: "plan to dedicate significant time and energy to any mobile game you ship for several months after launch."

Players expect updates for the games they love, you will run into unexpected technical issues in the vast and hostile sea of devices, and you'll want to be prepared to captialize on opportunities.

I'll also point out something else obvious to people making online games, which is a lot of the work post-launch has to do with customer support.  Some players will make purchases, say they don't know what happened, and ask for refunds.  Other players will be very agitated that the game doesn't play smoothly on their particular mobile phone.  Some people will really want to transfer that in-app purchase they made from one device to another.  And other players will just really want to know how to use the teleport power-up and get past Cave World Level 9.  The key points are: Yes, there's a real support burden associated with a mobile game, and if you are equipped to listen and respond, each of these player interactions can be good for your game business.  We've fixed bugs for some players and processed refunds for others and then seen their 1 star reviews turn into 4 or 5 star reviews, and all the while, our game, our game platform, and our customer support processes are getting that much better.

Track your challenge/frustration curve and focus on player engagement first:

Here's what the level completion funnel looks like for the first 6 levels in Wolf Toss right now:

It took work after launch to get to this.  When we first launched Wolf Toss 1.0, we lost nearly 50% of players in between finishing the first tutorial level and progressing to the second.  Why?  We had a little usability bug in which we showed the world map after the 1st tutorial level was done, but didn’t unlock the next “node” in the map.  Instead we expected people to play the same “first node” on medium difficulty and then hard difficulty to complete the next two tutorial sessions and unlock the next map node.  But there was nothing on the map screen that clearly illustrated progression, and many users never thought to click PLAY on the same node a second time.

After we changed this to clearly unlock the next node and move the Wolf forward on the map, we noticed that we improved our progression rate from level 1-2 quite a bit, but we decreased the completion rate for the very first tutorial level?  Why?  Well there was a design goal to show players lots of the cool things (like cannon to cannon navigation, various shot power-ups, and the cheat wheel) all in the first level, so they’d know what set this game apart from others in the genre and would be more likely get into the game.  But introducing all those concepts in the first tutorial level made it longer and more difficult than it had been when the tutorial was a series of 3 bite-sized levels, each of which introduced just one concept.

In the current progression, players can finish the tutorial by just aiming cannon to cannon, and we don’t introduce cheats until level 6 – the first large indoor “mansion” level (completion of the first mansion is the ultimate goal in the funnel above).  This engagement monitoring is super important, because every freemium game needs engaged players before it has any hope of being a successful business.  Player minutes and repeat players are the two things to optimize for first.

As I said in my earlier post on pre-launch planning, making loads of money was not an original goal for this game, and while we did have a single in-game currency and put some rudimentary thought into our currency sources, sinks, and prices, we did not invest in a carefully designed economy or test the game economy's performance prior to launch.

So it was no surprise to us that our ARPU (average revenue per user) numbers were pretty poor when we released the game.  The only things players could buy with in-game currency were content unlocks and spins of the cheat wheel.  We didn't have consumeable items, personalization purchases, and we'd designed all the levels to be completable with the power-ups presented to the player during the normal course of play.  While most of the mansion unlocks and world unlocks required more currency than players would earn in a headlong run through the levels on easy difficulty, it was easy to “grind” hard levels again and again to earn currency at a 2X rate toward unlocking more content.  Looking at the funnel above, you can easily see that content unlocks in a game like this don't make for a great monetization design, because the majority of players don’t finish the first six levels. Even so, that doesn’t mean they’re not interested in buying anything.

Our first major monetization update added a lot more purchasable items for the wolf hero/heroine: helmets, hats, a coin doubler, an XP boost, single spin tickets and 5-packs of tickets for cheats, etc.  This single update of more purchasable content doubled our ARPU.  ARPU is still low, but our ARPPU (average revenue per paying user) is actually quite high now.  This means our purchasables appeal a whole lot to a small segment of our player base, and our economy tuning should shift to offering purchase-worthy value to a larger percentage of our base.  I'll write more on designing monetization to let different player segments pay they way they want to pay in a future post.

The bottom line is that for any future puzzle or level-based games we create, we’ll most likely design them with free access to all the playable content, and economies focused on purchasable consumables, useful permanent items, and decorative items.  We'll also be keen on validating and tuning the economy through beta testing before launch day.

Taming device proliferation to provide a stable player experience for more than 99% of players. 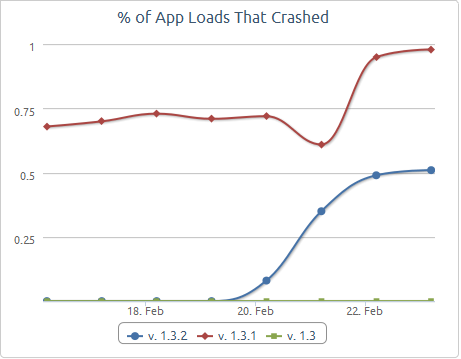 As we said in our recent Moai platform blog post about top lessons from the release, the Android Market reports Wolf Toss is compatible on 565 different devices.  There's just no way you can test on every compatible device, even using online device testing services.  But you can go through a process to get to a very compatible and very stable game in a month or two.  There are great services like Crittercism available to monitor game crashes and hangs in realtime, you can get remote access to the problem devices to reproduce issues, and you can decide to either rule problem devices out of the compatibility list or fix/work around their specific problems.

This is a lot of work, and there will be some customer pain and some 1 star reviews early in the lifecycle.  The good news is that your game tech will get better with every fix you make, and the real-time monitoring means you will be very sure when you've achieved a highly stable user experience.

Our last batch of Android-focused stablity fixes involved very complex threading issues that took a while to understand and resulted in some hair-pulling moments.  But the data shows and the customer reactions have validated that these fixes were a huge win for the game, cutting our Android crash rate in half.  0.5% is still higher than we'd like, but we have the right tools and process in place to continue to drive this down, and it's very valuable to know that 99.5% of our players are getting the intended experience across 565 devices and 1.3 million players.  This hardening will pay off as a smoother launch experience for every future game built with Moai.

On this blog's upcoming posts: with GDC coming up fast (post in the comment section if you'd like to say "hi" at the show), I'm planning to get two more articles whipped into shape for this series: one on app store SEO and another on the relative performance of incentivized vs. non-incentivized installs.  My questions for you: (1) is there a specific topic you're dying to see sooner rather than later? (2) would you rather see more long articles like this one, or shorter articles more frequently?  e.g. This article covers three separate game tuning areas and could have been done as three short, focused articles.