Both Sides of the Video Games & Violence Debate are Nonsensical

Why the "do video games cause violence" debate is more futile than you thought.
Aidan Herron
Blogger
December 07, 2020

Ah, yes. The old “Do video games cause violence” debate. A debate so loaded with biased hyperbole on both sides that I feel like I’m at a used car dealership. And for obvious reason: for the “yes” side, it provides a handy scapegoat to avoid addressing the more complicated issues that cause violence, while the “no” side simply tries to defend their favourite hobby at all costs.

It’s a debate that I imagine most of us are numb to by now after being engulfed in op-eds supporting either side—all of  which are conspicuously corroborated by some kind of enigmatic but apparently definitive scientific study on the matter.

Which leaves us with this nonsense: 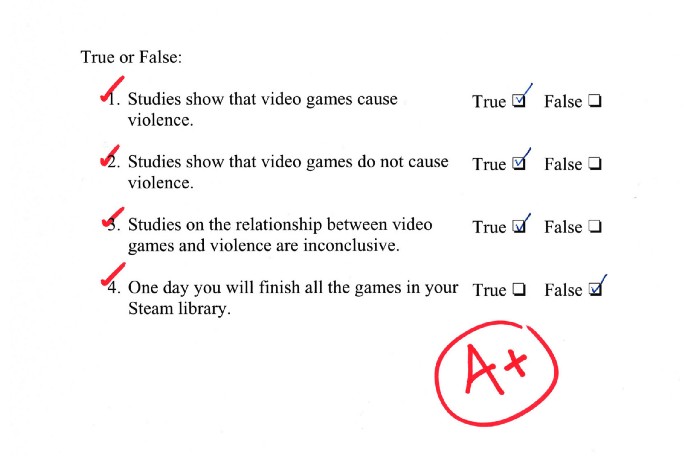 The fact that anyone can find a legitimate scientific study to support their position in an issue this politically charged is problematic, and it makes it hard to gauge the impartiality of anyone advocating policy changes for either side. Hell, even our status as a game design blog compromises the impartiality of this article.

Breaking through the Hyperbole

Let’s dive into the hyperbole on both sides. I think the “no” side might best be embodied by this meme format: 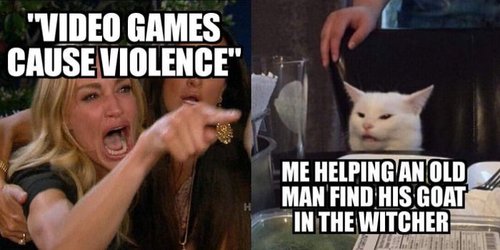 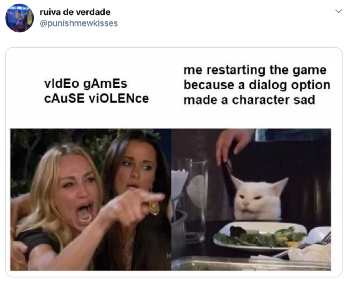 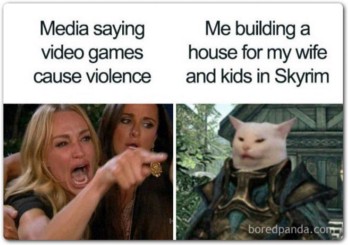 This format became popular in the wake of the media’s anti-video game rhetoric which followed the shootings in El Paso and Dayton earlier this month. It captures a few key points of the “no” argument:

The other main rebuttal presented by the “no” side is to suggest another cause, often poor gun control, as the true culprit for violence. I suggest reading this article by IGN’s Dan Stapleton if you want to go further down that rabbit hole.

While obviously satirical, it makes a valid point that ascribing violent behaviors to a singular cause is ridiculous. People have been violent for countless reasons for thousands of years, and—contrary to popular belief—video games have been around for a little less than that.

This does not excuse video games as a possible causality, but suggesting that the emergence of video games in the past half-century is going to create some kind of violent epidemic in the next generation is speculation at best.

The Case Against Video Games

In the same way the earlier screaming woman/confused cat meme format showcased the positive non-violent side of video games, it is just as easy to cherry pick examples of excessive violence in video games to showcase the contrary.

This unlisted video was uploaded to The White House YouTube channel of all places, and much like the screaming woman/confused cat memes, it kind of sums up the “yes” side perfectly:

Video games are still a relatively new medium and I agree with the “yes” side’s insistence on studying and monitoring their effects on players, especially as games grow more and more visceral and immersive with realistic graphics and virtual reality systems. But determining any given individual’s capacity for violence and aggression would need to be measured by dozens of factors (upbringing, social status, etc.), which is what makes gauging the behavioral effects of video games so difficult. Do they have an effect? Without a doubt. Making someone stare at a loading screen for hours will have an effect on them, but enough about Grand Theft Auto Online. Media impacts all of us in a myriad of different ways, and video games are not the only perpetrators when it comes to violence on screen.

But since there are an estimated 2.5 billion gamers globally now and that the world hasn’t devolved into The Hunger Games quite yet, I think I can also safely say that sometimes the effects of video games do not inspire violence in its players.

For that matter, what do we mean when we discuss violence? There are many kinds of violence, some more sinister than others. Do video games provoke violent behavior in terms of mouthing off to a loved one? Do they provoke people to become physically or emotionally abusive? Violence appears in many forms, and “video games cause violence” is a weak look at best when it comes to deciphering the kinds of violence supposedly being enacted.

And this is why all the talk about regulating or banning video games is nonsense—it’s too big of an economic force to throw a wrench in*.

None of this absolves game designers and developers of being conscientious of the violent and other graphic content they put into their games. It’s important not to get lost in the hyperbole of it all and remember that the games you make will have an effect your players in some way, so try to make it a positive one.

For further discussion of violence and video games, listen to Episode 11 of The Panic Mode Podcast—Violence in Game Design.

This article was originally published August 30, 2019 on www.panicmode.net.