The goal of the experiment was to make one f2p game with ads every day, and do it as fast as possible, to publish it on the same day or the next.

Last week, this experiment ended and I collected all the info. Then I made the decision to publish what might have been the most groundbreaking insight of my game dev experience: Making short games is a way to survive (and do not disappear) in the game industry where the leaders are not people like me. You must be talented to make the best game you can in the least time possible. Amateur devs and artists who create various games a week and have fun with it typically get revenue from ads and in-app purchases. .

How I got here

I started this experiment because my friends were making money with their f2p games and they recommend me to make these free games instead of my typical paid games in order to improve income. I thought that the paid model was the best for me, but instead the game industry taught me one of the biggest lesson since I began.

Just one day before I decided to make some f2p games, I was developing another big paid game. But I needed more money for its development to ramp up the quality, so I had to pull the plug and admit the sad reality. If you read my previous posts, you knew that I wanted to stay with the paid business model, but like me, developers are being forced into this model to make a living.

To start, it is best to begin by making a list of games you would like to make, beyond the primary instinct of doing without thinking, like I did before. I tried to make racing games that took 1 week to complete, then I made more mistakes doing other kinds of weird games that nobody liked to play. All those games were total failures. Finally, I thought people would want to play short and simple games: Easy to play but hard to master games, within well-established genres: runners, platformers, simulators, and so on.

The first runner game I made was a frogger, developed in less than 8 hours, and it made 150$ in a day, more than some of my previous (better) paid games would ever raise in a single month. It was clear then that f2p games could generate quick revenue, however this was only a short peak, and revenue went down the very next day to less than 20$.

From this point on, I developed more f2p games, with the goal of finishing them as soon as possible and measure the results in the markets. Consequently, lots of bad reviews came in. I tried to reply to all the mails, comments, and feedback, but it is impossible to reply to everybody.

Where creativity and monetization clash.

I am going to show you results from two of the games that generated the majority of my revenue. There is no space here to do it with all the games I made.

Second, the compressed dev time used for this experiment in charts

This game was prototyped for a game design challenge. I fleshed it out within a month into a full game for PC and mobile devices. 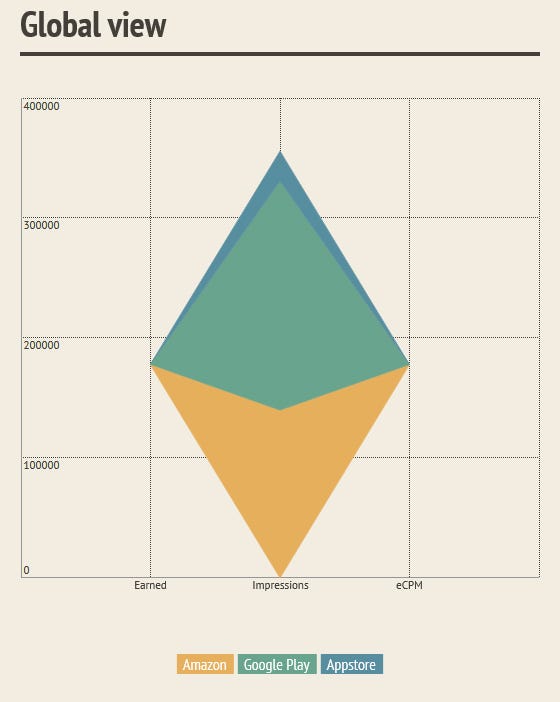 From this diamond-shaped chart, you can't tell much about the revenue stream during the month, ... so let's render the data differently: 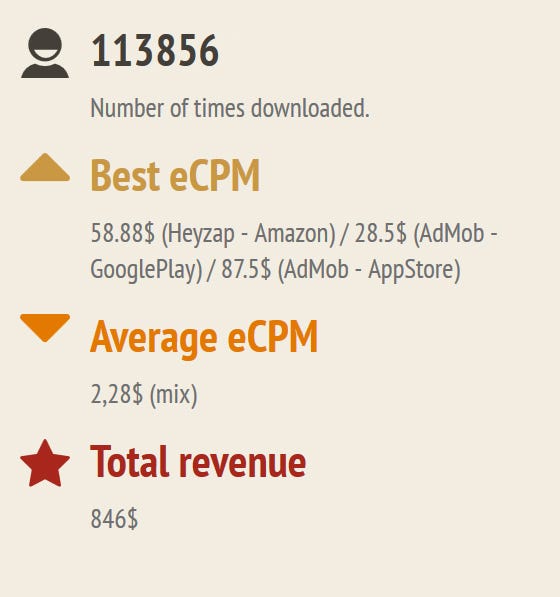 I think that's where you're seeing the previous crazy chart translated, is that too much people? 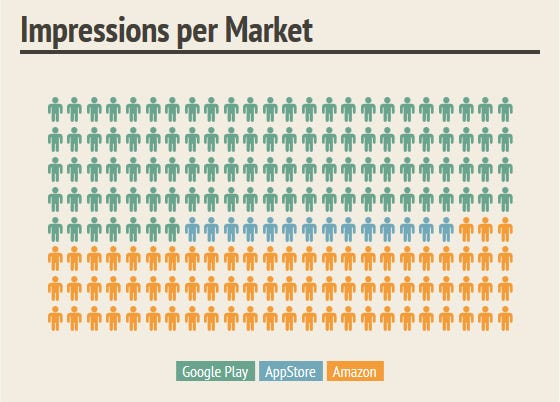 In other words: By becoming a f2p developer, you can expect 113k downloads and more. Should markets hide download numbers? Does the download figure influence people's decision to download a title?

In this chart you can see more ad networks being added at the end of the period to add more data. Can we improve the "fill rate" adding ad networks? What about downloads after updates?

With the amount of views, and the average eCPM ,can we measure revenue?, let's see the finantial results for this simulator game: 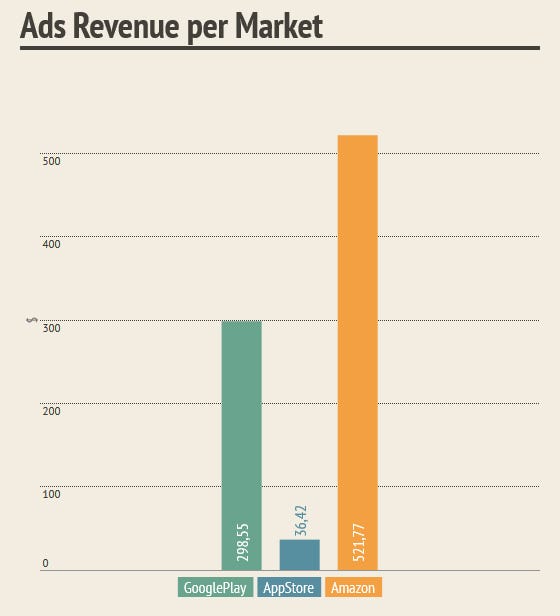 We can not measure the revenue because the eCPM changes with the markets, the ads publishers, etc. It is a whole new question that emerges and can't be answered from largely and superficial changes. The best eCPM I saw in a game of mine was 450$ with the Chartboost ads network, but that's because it only manages a few users a day.

These are the charts for the eCPM evolution during those months for that game:

If we compare the results from the impressions in the AppStore, it looks like AdMob wants attention to display ads in the game, it's the best eCPM of the period.

Though that isn’t necessarily a math question, it is a conflict of the eCPM for each market. With the revenue evolution charts, it is almost the same if you overlay the previous charts. For example, Amazon

Overlay chart: Is it possible that the eCPM/Impressions/Revenue peaks match in time?

To any game developer who has struggled to get revenue from their work, it must seem incredibly logical to see a raise in eCPM with a raise of downloads, but that is not the case. You can have the exact same download numbers and receive a very low eCPM for weeks, so you almost get no money.

Making a game a month and updating it every 4-6 months can work, but it's a bad idea. Users can almost invariably tell your intentions (make quick money) and call you out in the reviews.

I however did not let that stop me, and in 6 hours, I made a frogger clone. These are the results... 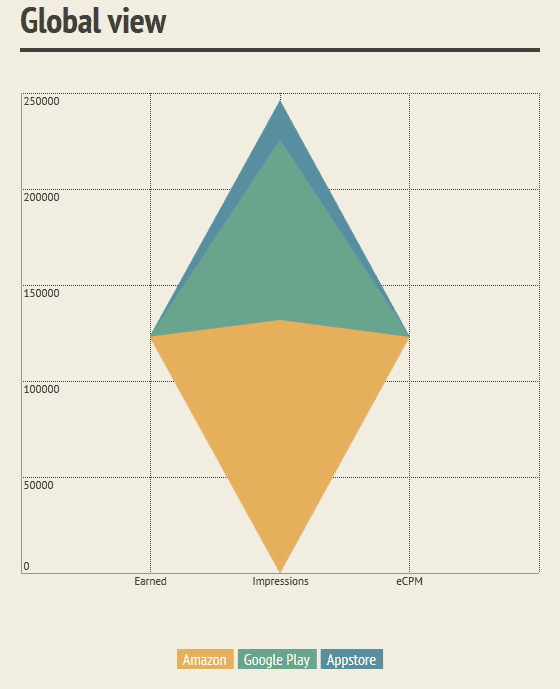 Notice the difference in the middle of the diamond (Amazon impressions), now let's use a fanzy people chart where you can notice that: 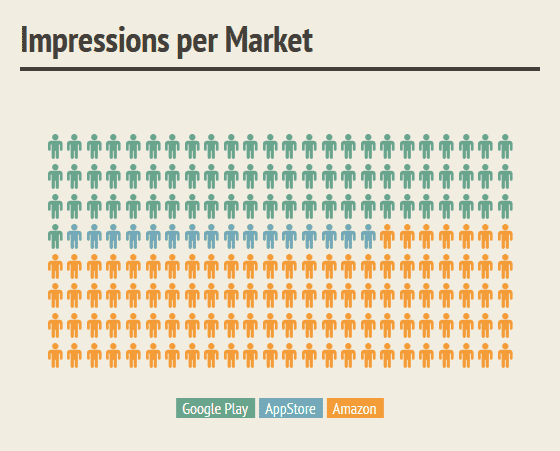 And now, the crazy part, the revenue data: 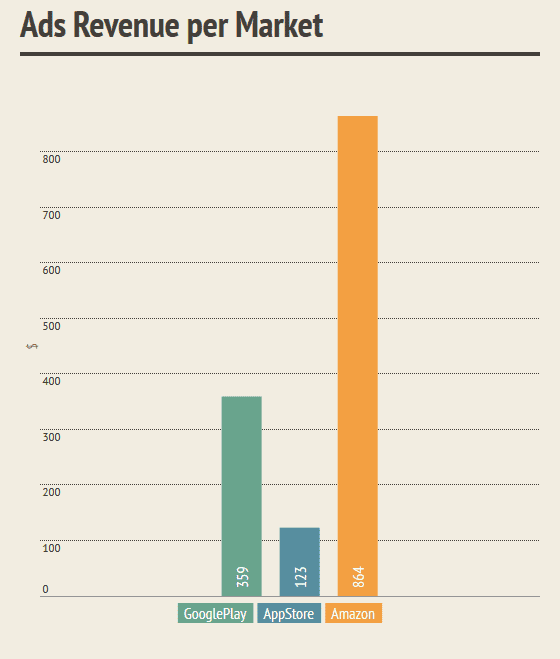 Yes, with a smaller number of downloads, this game made in 6 hours earned more than the one that took one whole month to develop (even with game design award, best looking graphics and better gameplay), just from the Amazon version with ads.

The difference between both games results is the number of ad impressions: 355k for the Leopard and 246k for the Frogger. 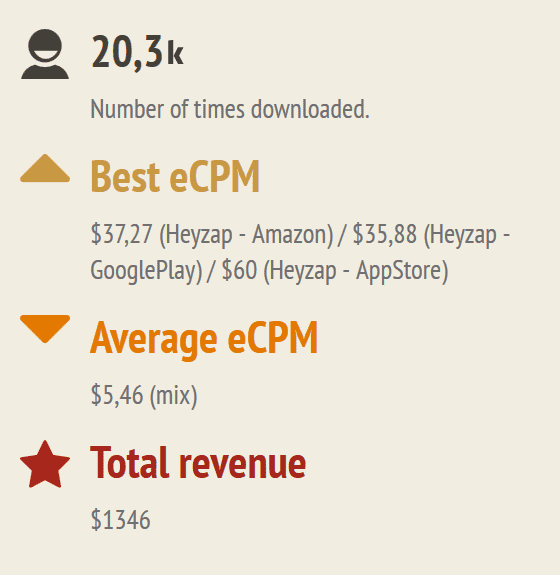 In the wake of f2p generation, lessons may yet be learned, with a better game, the users engagement give us a better eCPM, therefore, better revenue. Luck is important too. I could not even imagine that making a frog game in six hours could make me get $1.3k ,nowadays.

I had fun with this little experiment,to test a way to achieve the minimum sustainable success.