Small indie, big event: a look back over this year's GamesCom and the options a small game dev team can consider to have a presence at the biggest computer and video games trade show in the world.
Laura Bularca
Blogger
September 01, 2016

345000 visitors should be quite a good reason for any sane game developer who wants to make a game known. But if this is not enough, here are some more numbers: 30500 trade visitors, 97 countries, 877 companies, 193000 square meters. GamesCom is currently the largest event for computer and video games in the world and these are its numbers in 2016. 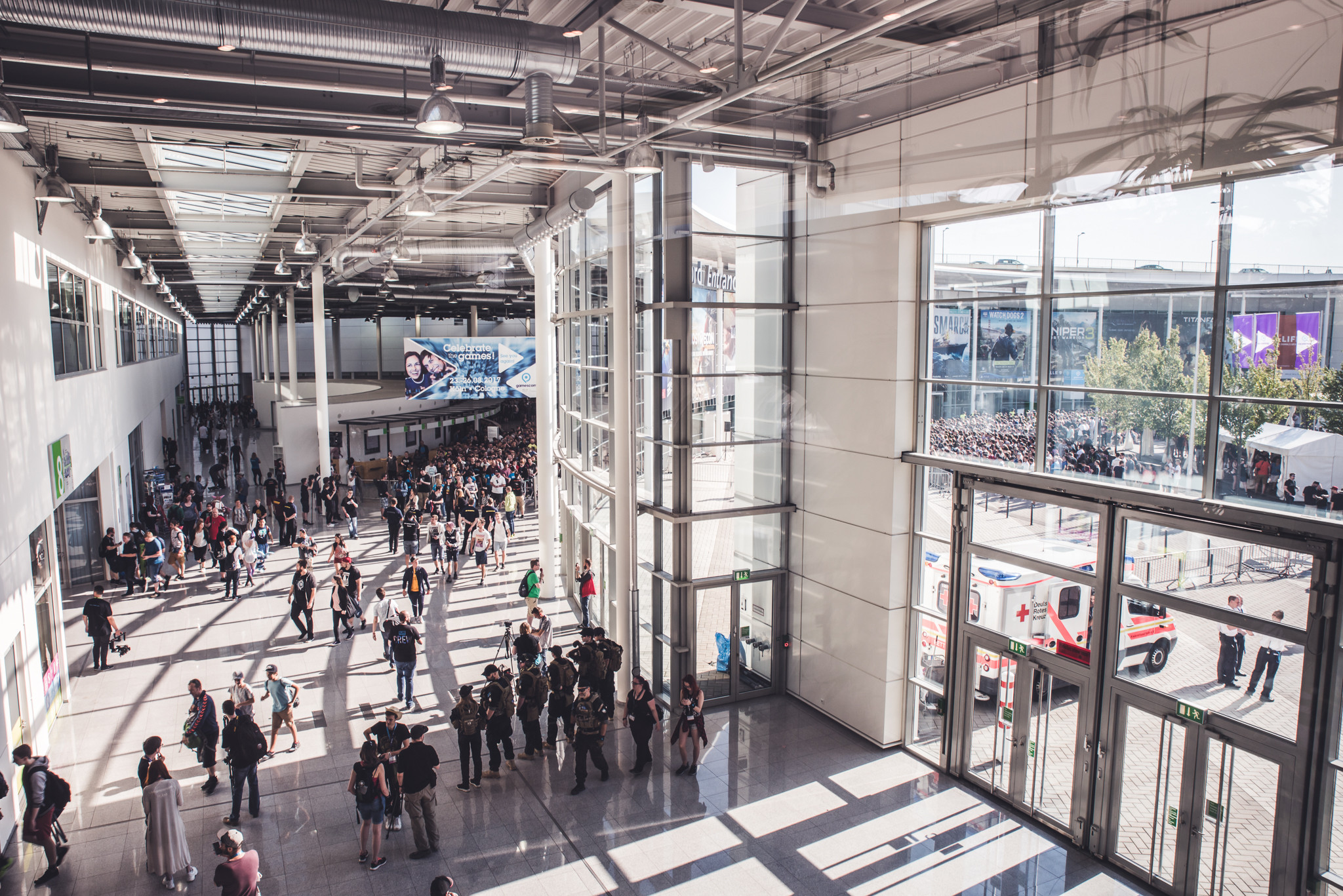 Because Cologne attracts close to half a million people, attending GamesCom is a big thing for big publishers. Hundreds of square meters dedicated exclusively to Blizzard, who competes in grandeur with Ubisoft and EA and other huge names in an effort to attract the hundreds of thousands of avid gamers. At GamesCom size sure matters, it is the only thing that matters, and this can bring many to despair. How many micro teams would survive with the budget on one single GamesCom consumer booth – I wonder this every year. 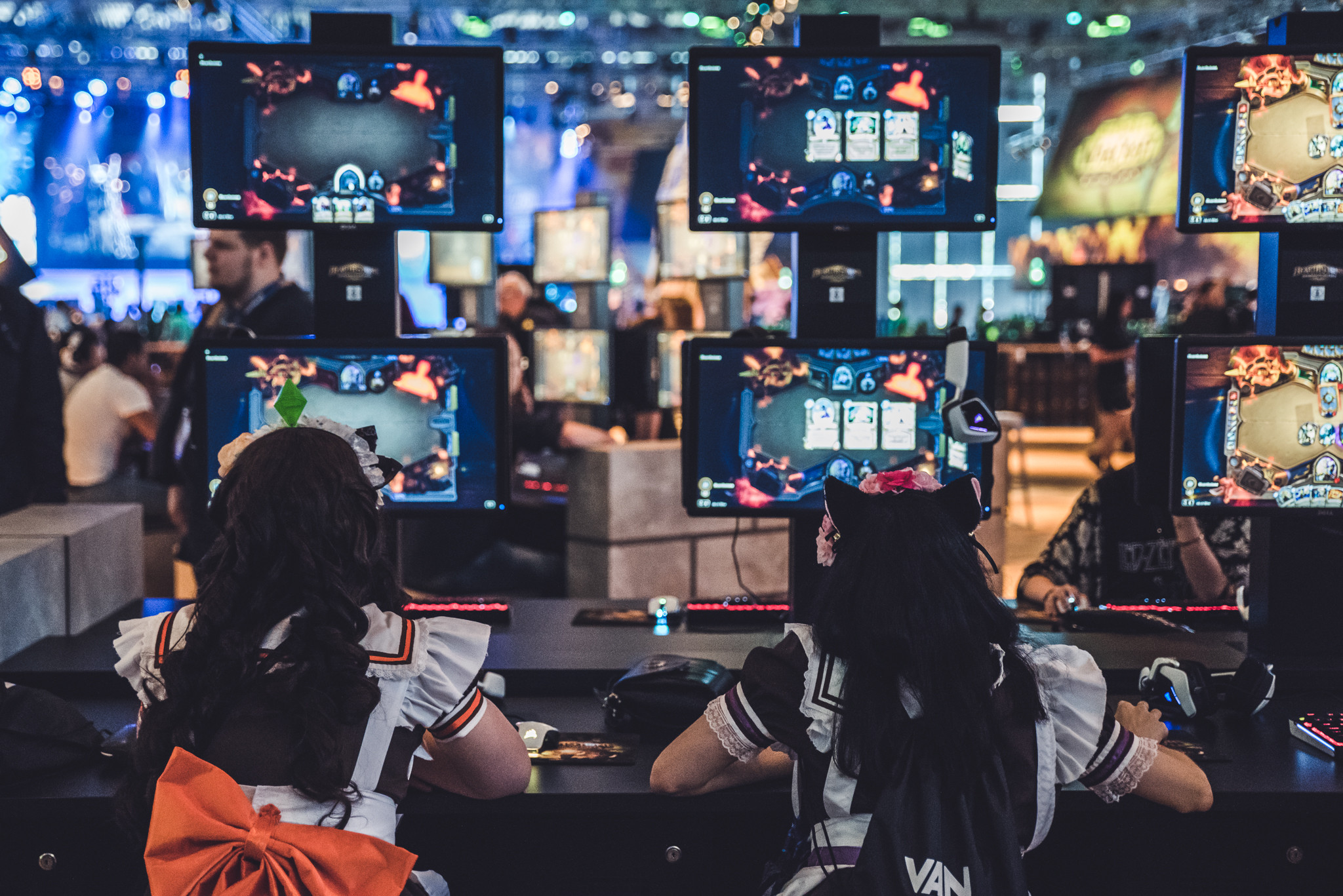 But what is big attracts a lot of people so GamesCom for visitors means huge queues that generate anxiety, the kind of anxiety one can only escape by hunting newer, smaller gems. So it can pay to exhibit at GamesCom, and the concrete proof is the growth of the Indie Arena Booth, in both size and number of games and developers.

So how can one be at GamesCom? This is a good question to ask even one year ahead, as GamesCom is anything but cheap for exhibitors. But first, lets talk some technicalities.

While its easy to find press coverage regarding the big consumer presence and shows at GamesCom, its not so common to read about the business side of the event. Yet GamesCom has always been divided in a business section and a consumer section, with separate tickets and even separate start dates. For trade visitors, GamesCom takes off one day before, which is Trade and Media day. This day is reserved for business meetings and arrangements, and for the privileged traders, its really the only time you get to see the entire GamesCom show. Almost every big name in the industry has a large consumer booth in the consumer section, and a fairly repressive one reserved for business partners and press, in the business section. 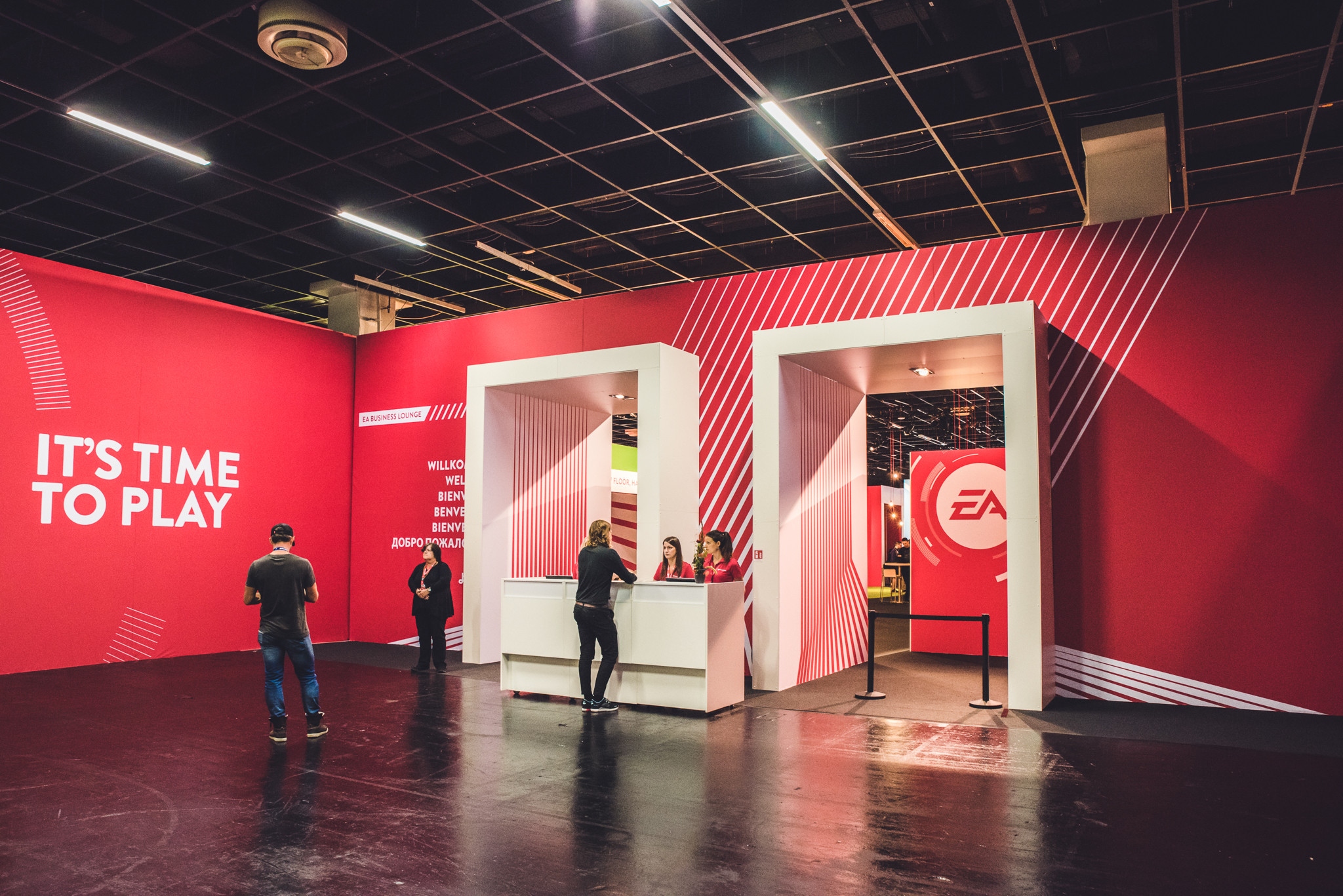 “You shall not pass”, EA version – © Sebastian Bularca

Yet there is a lot of the industry that only joins GamesCom for business. Those folks do not have any presence for consumers, and many joke that you can actually tell the veterans from the newcomers in the industry by how fast one leaves GamesCom. A lot of trade visitors never stay for the entire show, and many typically stay only for 2 or 3 days.

The business section is also the one where a lot of organizations and countries make an effort to attract game developers and video games industry trade. There are entire halls occupied by country pavilions, as well as lots of b2b services such as publishers, distributors, service providers, and more. A lot of national pavilions and trade organizations are actually facilitators for their games and teams. So you get to see more developers and more games, if you are a trade visitor.

There is another perk you can gain in the business section. The video games industry sure likes to party and it is traditional for professionals to celebrate GamesCom together, at parties organized by many important companies. Yet most of these parties are with invitation only, and so you get access based on your inside network (which you also build at the GamesCom business area – that is the main reason fr which everyone is there).

How to GamesCom as a game developer

If you want to attend GamesCom as a game developer, the first thing you need to do is to understand your goals. Understand what you need the most: is it business partners, is it showing your game to people, is it press or something else? Then compare your options and always remember to factor in your travel, lodging and food expenses, which tend to rise substantially in Cologne in August.

Here is a list of GamesCom 2016 options for game devs form my perspective:

A normal visitor ticket that grants you access during Consumer days and in all Consumer areas. This ticket was 49 Euros for early bid, 59 Euros if bought in advance or 69 euros if bought on the spot, though this year all tickets were sold out way before GamesCom started. If you use your consumer ticket to promote your game, you can get creative with the way you present yourself and with what materials you have to hand out. Remember your clothes can always be a walking billboard.

A trade ticket grants you access to GamesCom one day earlier and also allows you access to the business area. The extra access rises the price up to 85 Euros early bid, 99 Euros off site or 109 Euros on site. Previous advice applies, but if you want to promote yourself and your game in the trade section, you might need a different take on your materials, based on whose attention you want to get. Most exhibitors are relatively early in announcing their presence and this is easy to check on the GamesCom website. This can help in securing meetings early, which is a pretty wise thing to do given that no one actually has time to plan anything during the show, and that often, not even one minute can be spared. Plus, if you are early in arranging a meeting, you let your partner some time to understand who you are.

“As developers you get access to both entertainment and business area. You see everything Gamescom has to offer and have the great opportunity to talk to other game developers.

Developers are there to show of their work and are very open about their process and the way they have built their business. After hours parties are also a great way to meet industry people. Small projects get a lot of attention and you feel there are a lot of opportunities if you are ready to grab them.

As first timers we did some mistakes: we had no business cards, we had no good answer for what our goals where at the conference and we played too few games in the first day. “

A spot in the Indie Arena Booth starts at a little over 1000 Euro and it can reach around 6000 Euros for a decently sized booth (or more. You can always spend more). Its important to know that these places are limited and that one must submit for them several months before. To submit, you keep an eye here.  Remember that any exhibitor gets to have Exhibitor tickets, which are actually the coolest ones. They cost around 59 euros and they are cool because they grant you access off schedule hours, which are exactly the times when you can best bond with others. 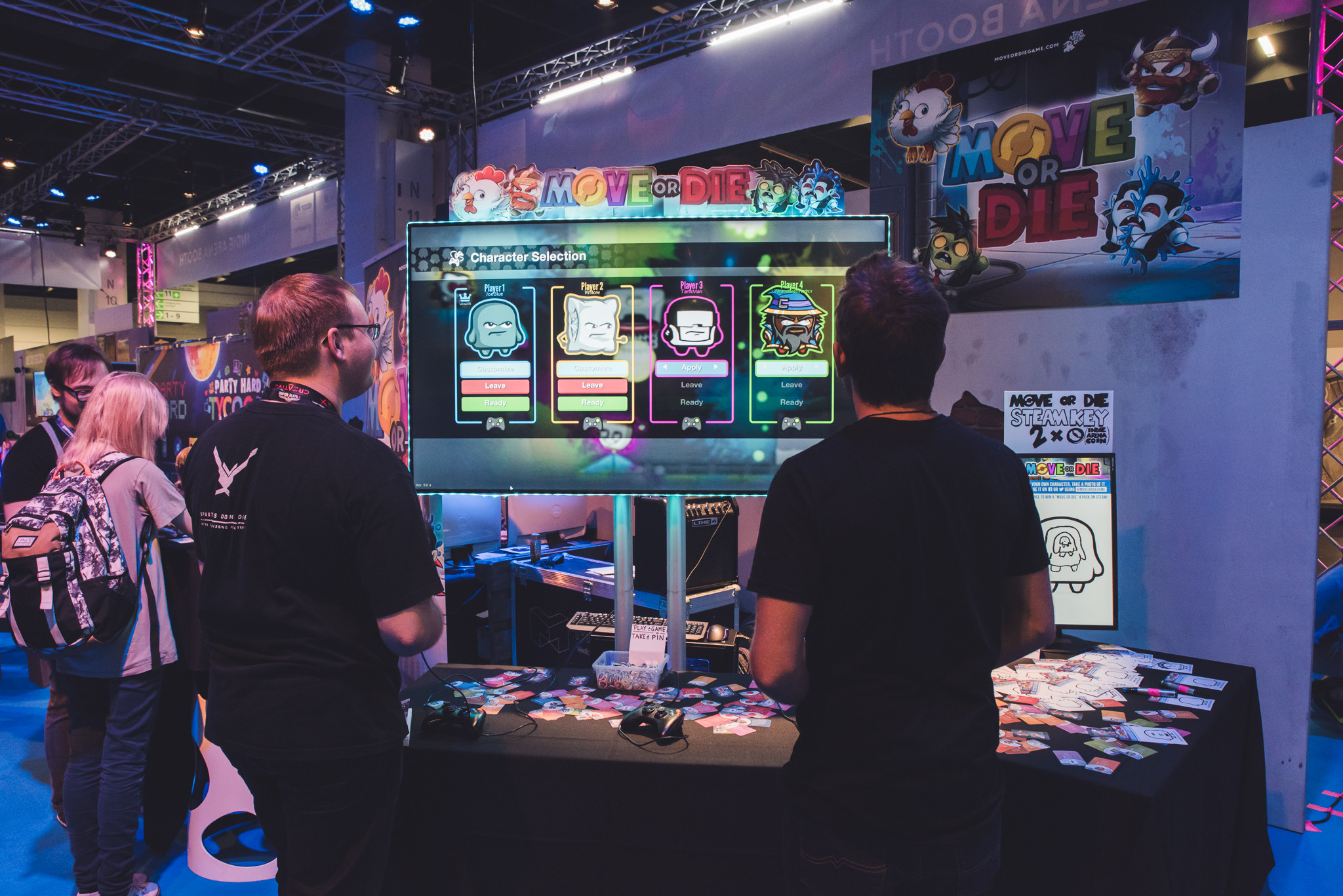 Move or Die by Those Awesome Guys – © Sebastian Bularca

“The booth cost is one thing, many developers forget that there are other expenses involved when it comes to showcasing your game at an event. In our case, with a 3x3m booth, we invested around $6000 in the entire experience.

Specifically GamesCom is one of the more pricey events because of its sheer size, both attendees and time wise. It’s consumer focused, and as a developer you have to be prepared for 5 days worth of constant waves of people wanting to play your game.

With that in mind, the biggest mistake developers make is to think that all of this will translate into sales, which is simply not true. The main focus of the event should be on networking and meeting awesome people from the industry. Having a booth is just an added bonus. As my friend Oliver said, “Having a booth at Gamescom is the most expensive playtesting you can do”.”

Tag along your country or organization, if they go to GamesCom, or else tag along someone who does. The reasons for the country and trade organisations pavilions is so that they can showcase their local talents and also to share costs in an effective manner. They want to attract more business which is why they showcase at the business section only. At Sweden Game Arena, we typically think long before how to design the booth, including the spots we designate to our studios and our partners. We also always include shared meetings and presentation spaces that multiple studios can organise and plan. In our case, costs can be as low as 0 and as high as a half of exhibition price, but this varies for each organisation so its best to ask your questions early.

” I decided to travel to GamesCom with Sweden Game Arena and join their booth, because it simply made no sense for me as a tiny indie to do anything else. A booth of my own would have been far too expensive and I do not currently have a publisher to join – so sharing space with other indies was a great alternative. In the end, I got home with not only new contacts and leads from the people who visited the booth, but also great feedback from the people I had shared it with.” 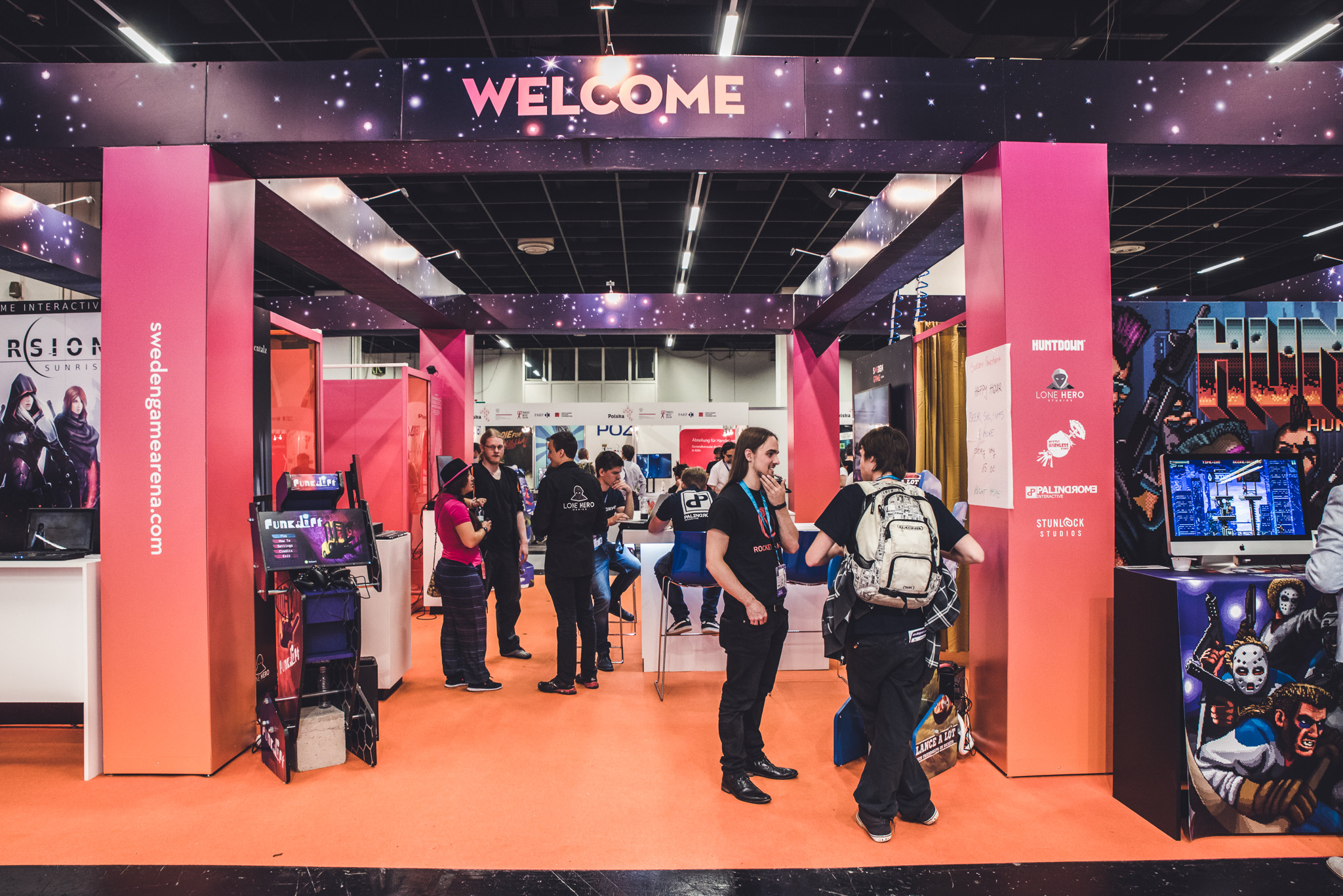 Buy your own space. This is the most expensive option but the good news is that the organisers make it very easy to plan. Here is a pretty complex tool to estimate your costs (the GamesCom 2017 fair is not up yet, but you can always play around with other shows).

Final Bonus - a day at the Sweden Game Arena booth