In detail analysis of the social media outreach from all channels where our game Life Pictures was announced.
Catalin Marcu
Blogger
June 27, 2016

This article was originally posted on my personal blog.

The grand moment has finally come. We announced Life Pictures, the game we've been working on for the past few months. Joy, excitement and terror all in one!

So how did we make the announcement and how did it all go? Read on for an extensive analysis!

When we planned the announcement, we decided we were going to set up an official page, a facebook page, a twitter account and an youtube channel. The plan was to set everything up in private, including uploading our teaser, then make them all public at the same time, followed by facebook posts, shares, likes, tweets and retweets.

We set up an official page using blogger, to make sure we can quickly edit it and add new content as painless as possible. We bought our domain, lifepicturesgame.com, and we set it up as the blog's custom domain. After a couple of days of html and css, we finally had our page, which contained for the first release: the teaser, 4 screenshots and a pretty long Q&A about what the game is.

The official page was crosslinked on most of our tweets and facebook posts, plus in the description of the youtube teaser. Below you can see in detail our stats for the official page.

To sum it up, we had 212 page views in the first day, with a majority from our friends in Romania and US in 2nd place with about a quarter of the total. The main channel was facebook, because that's where the news about our release spread the most, mainly in our groups of friends.

In the second day we had 349 page views, this time mainly from twitter. Our audience diversified a lot, Romania accounting for only several views, while US become our biggest audience, followed by other countries like France, UK and Germany.

We made a facebook page for Life Pictures, which makes it easier for anyone interested to receive news about the game. by liking and following the page. The first post from the page linked to the teaser video, with the official page also crosslinked. The second day we made a post with the first 4 screenshots. Below are the results. 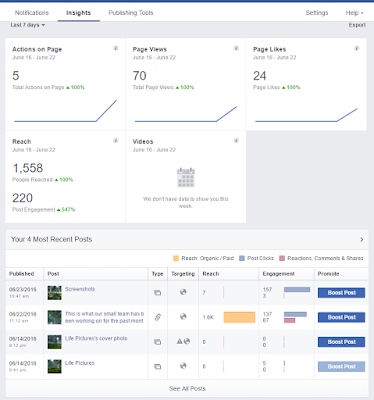 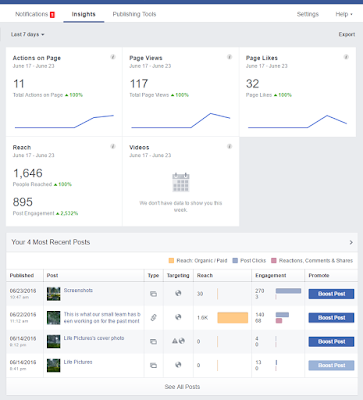 The summary: 1558 people reached in the first day, with 220 engagement. The teaser was shared quite a bit by our friends and the official page was accessed by many of them thanks to the crosslink in the post.

During the second day facebook didn't help us a lot, only 92 more people reached. The screenshots post behaved very poorly in this regard. But the engagement for it was quite high, 270 as opposed to 140 for the teaser post.

And everything totaled 1646 people reached and a surprising 895 engagement, although I'm not sure how that number is calculated, I guess it considers page hits and likes also, not just the posts.

Twitter proved to be the major winner for us. We started with a tweet with the teaser and a bunch of hashtags. We quickly followed with another tweet with the teaser, but this time saying it's made with Unreal and including the engine guys in the conversation. Which turned out to be a ridiculously good move, as you'll see below. On the second day we posted a tweet with the 4 screenshots, also hashtagging UE4. Which was an even better move, check out the numbers! 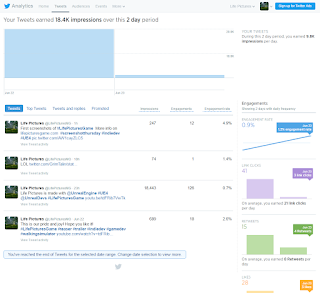 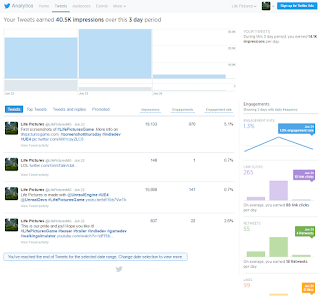 On the first day, we had 19453 impressions, most of them driven by the second tweet. And that was mainly because it was retweeted by the awesome Unreal guys, including their main channel with 171K followers. Only 689 impressions were generated by the first post, despite of our "smart" hashtags. Overall engagement for the first day was 157.

The screenshot tweet from the second day killed it. Not necessarily with the number of impressions, which at 19133 were still a tad behind those of the second tweet from the first day. But with 970 engagement, it was a blessing. Besides likes and retweets, it sparked conversations and we had many comments praising our game or encouraging us in our work. We did our best to reply to all of them in an open and polite manner, which should be a no-brainer for all indie devs.

Overall on twitter we had more than 40500 impressions, with 1134 engagement. Which makes us all fuzzy and warm inside :).

For youtube we had a slightly different approach, meaning we set up a company channel, where we'll post videos from our other games too, not only Life Pictures. We uploaded our teaser there and shared it on our official page, on facebook, twitter, reddit and the Unreal forums. This resulted in the numbers below. The detailed analytics are only available for the first day, but as you can see in the number of views, nothing amazing happened on the second day. 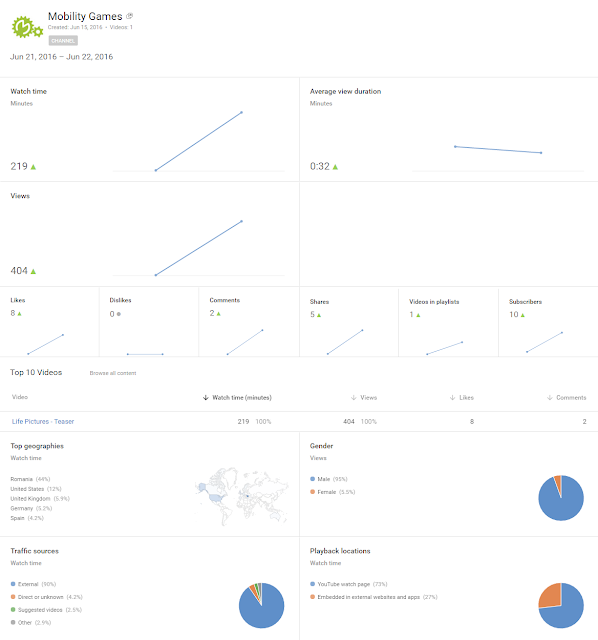 On the first day we had 397 views. Romania was the top audience, with nearly half of the views, followed by US, UK, Germany and Spain. Apparently an overwhelming amount of our viewers are male. Most of the traffic came from outside sources, meaning facebook, twitter and the rest. We had 10 subscribers at the end of the day and 8 likes.

After the second day we had a total of 482 views, 11 subscribers and 9 likes.

Truth be told, reddit was more of an afterthought and it showed. Although it was posted on /r/IndieGaming and it stayed on the front page for almost the entire 48 hours, the results where terribly underwhelming. With only 3 upvotes, one of which was mine, and 4 comments, two of which were replies from the team, I'd say that reddit was a big fail. Which goes to show that you can't treat any channel as an afterthought and expect results.

We posted on the Unreal forums in the afternoon of the first day, including the teaser, 4 screenshots, links to facebook and twitter and a short description with the link to the official page for more details. Below are the results.

The first day generated 96 views and 3 replies, one of which was mine. It also had some nice words from Jess, the community manager, which made us happy, especially considering how many cool games she must see everyday.

The second day almost nothing happened, leaving us at its end with a total of 109 views and the 3 replies from the first day.

We are a small team and this is our first indie game. We've been doing a lot of client work in the past 10 years, so we now have some funds to be independent and make a couple of games on our own.

The numbers above are probably ridiculously low for many people and maybe they look great to others. For us, they are an achievement and we're happy that people engaged with our announcement and had kind words for us and our work. Although we have a lot of experience in making games, we are new at marketing them and spreading the word. For our first time, we feel it wasn't bad at all.

As for what's next, our plan, as promised on our official page, is to keep the discussion going, by releasing new materials every week. This includes screenshots, videos, articles, tutorials and whatever else will cross our minds. We want to be as open as we can about our development process.

If you want to follow what we're doing, keep an eye on lifepicturesgame.com.

Thank you for reading! I look forward to hearing your opinions on these numbers and the way we approached the announcement.