We are all trying to find players for our games. Twitter may be a good place to start building your community from scratch. But it will work only if you know how to. I have figured a way to make it work.
Mariusz Kowalczyk
Blogger
December 10, 2019

I wonder what is your experience with Twitter when it comes to promoting your game?

I am especially interested if you were able to grow your account and get lots of engagements without spending $ or with very little $?

I will now tell you about my experience with Twitter.

Here is my profile in case you would like to check it for yourself: @Unusualsoft

I am there since 2011, but I was pretty much inactive between 2012 and 2018. I have started using it again to promote my upcoming retro platformer in the fall of 2018 (but again with breaks). I am super active there for the last 2 months.

First I will tell you how I got my followers:

From 450 to about 900: I have done a giveaway for a community of my existing game. About 450 people who knew me followed me in 3 days. Some created their account just to get the prize, but a nice portion of these followers are valuable.

So at this point I had more than 900 followers, I would say probably about 300 of them was active and interested into my content.

I have started posting better tweets (almost only gifs and videos) and using better hashtags. I have also started to post on the right time (when my audience is engaging the most).

660 new, highly valuable followers, who discovered me thanks to my interesting tweets. Out of those 660, I gained 150 thanks to a paid ads (I paid about 45EUR for them, 0.30EUR per follower).

I will probably not use the ads too much in the future, because most of these relatively cheap followers came not from the most valuable countries. I also prefer to have followers who discovered me naturally. 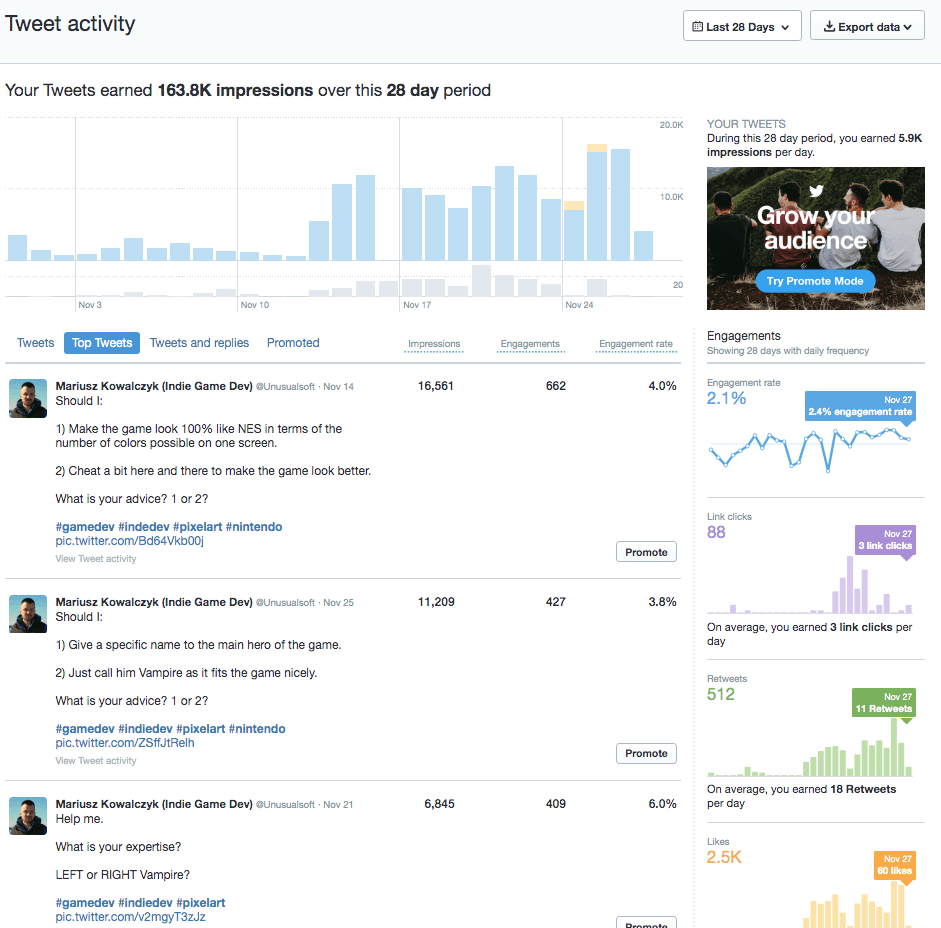 Tip 1: Interesting game that looks interesting too.
- You need an interesting game, otherwise people will not care. If your game will not look interesting enough for people to press "Follow", do you think they will spend money to buy it when you release?
- When you have an idea for a game, ask yourself who will play it? What is your niche or niches? For my upcoming game I aim for people who played NES and also for speedrunners. I know retro players are older now, so making a game with childish graphics, would not resonate with them. On the other hand, Castlevania is still very popular among these people and the spooky theme is something that older players will love to play. Plus you will have a nice spike on Halloween for sure. Look at the game I am making to see what I mean:

Tip 3: Use up to 4 best hashtags per tweet.
- Use https://ritetag.com/ to find good hashtags (with high exposure and good retweets to unique tweets ratio).
- Change some of them from time to time
- I would suggest these, depending on your game: #gamedev, #indiedev, #indiegame, #pixelart, #screenshotsaturday, #indiedevhour, #madewithunity, #gaming, #game
- I think hashtags don't only give you a chance for additional source of exposure, but they are also important to the algorithm. People who interacted in the past with tweets containing certain hashtags, will see similar tweets higher in their timeline. Same goes for certain words, so it may be good to add words like "game" to your tweets, so the algorithm will know what the tweet is about.

Tip 4: Post almost only Videos and Gifs.
Videos and Gifs are the most engaging type of content. I would suggest you to use them in almost all your tweets. Monitor your Twitter Analytics to see how engaging your tweets are and improve them.

Tip 5: Don't advertise, start a conversation.
If you will make all your tweets look like advertisement, people will lost their interest. Instead talk to your audience. Ask them questions, let them be part of your development process. They will like it and at the same time they will help you make your game better. I have already implemented many suggestions from people who saw my game. I have even redesigned the whole look of the game because of 1 single comment (most of the time it would not be wise to do so, but it was in the very early stage and after the experiments I made due to this comment, I decided the new look will work better).

Tip 6: Follow other developers and answer to their tweets.
Retweets their projects too.They will follow you back and help you spread the word about your game in the future. Answering to other tweets gives you additional exposure and a chance for new followers.

Tip 7: Don't talk about you and your life.
People are here for your game not for your personal life. This is not facebook, you don't post to your friends. You can post something personal from time to time, but most of the time don't do this.

Tip 8: Post everyday from 1 to 4 tweets.
Every tweet is a chance to find new players for your game. Use this opportunity.

Tip 9: What to post? Your game progress.
Are you working on a new level? Maybe new enemy? Post a short video showing what you have done today.

Tip 10: Repost your content.
Use Media Studio feature on Twitter to repost old videos without uploading them for the second time. People on Twitter don't mind if you post videos from the past. You just have to do it wisely:
- Repost the most engaging tweets from few days before.
- Add some new value to the tweet by changing the content of it (the text). If last time you were announcing your new trailer, next time you post it again, but instead of "announcing" it, ask what people think about it. The third time you will post it, tweet something interesting about the features of your games. See my Twitter profile to get a real life example how I post the same videos many times. I have posted some videos 10 times and I have been able to get many retweets and likes, many times from the same people who already engaged in the past.

Tip 11: Don't massive follow others!
Don't try to follow others in hope they will follow you back. This is useless. Even if you will gain some followers that way, they are most likely following you just to follow you back, they don't care about you or your tweets. You will only harm your profile by doing it. Your tweets will automatically look worse to the Twitter algorithm and your profile will look worse to people who see it. If you follow thousand of people it tells me about you, that you don't read and don't engage with the tweets of your followers. And if you have thousands of followers but only 0 or 1 like under your tweets, it looks super suspicious, spammy and bad.

Tip 12: Your profile.
- If you are 1 person company use your real name and photo.
- Create a nice, concrete bio. Don't use hashtags there or links. Tell EXACTLY what you are doing, if you say there that you "like sports and music" people will not care. If you say "I'm making bloody shooter for PS4" that might interest the right audience. The bio needs to fit to the content you posting.

Tell me what you think and what is your experience with finding new players for your game on Twitter. Maybe you have some additional tips for me and other devs?

PS: I have posted this originally on Reddit 2 weeks ago, since then I have already gained 130 new followers (for free), so It's working.

EDIT: I have recently removed a few hundreds inactive followers, so the numbers on my Twitter may be lower than on the screenshots.