11 Tips for Showing your Game at Public Events

Some things that worked in my favour when I showed my game Switch 'N' Shoot at a public event.
Game Developer
Staff
June 06, 2018

Showing your game off at public events is an important part of raising awareness among your target audience. But it's hard work, and there are many things that can work against you, not just in the way you present your game but also in the design of the game itself.

With some foresight, you can steer the design of your game to maximise the impression you make at public events and make the difficult job of presenting it a little easier.

Last weekend, I showcased my indie game Switch 'N' Shoot at Norwich Gaming Festival 2018 and I was very happy with how smoothly it went. So I decided to share some of the things that I felt worked in my favour in the hope that it will be useful to you, fellow developers, when you present your own games. 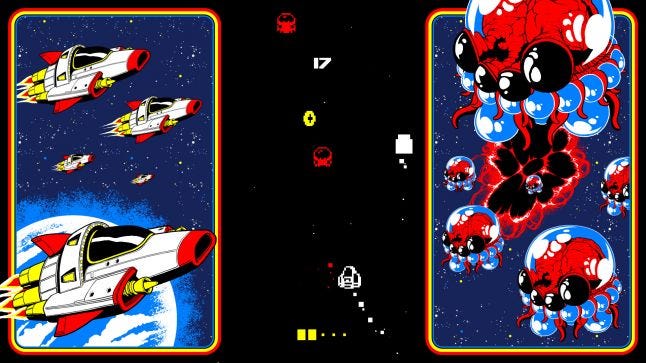 Switch 'N' Shoot, a shoot 'em up with just 1 button

Please remember to take this with a pinch of salt. Every game is different. What worked for me (a solo developer) and my small indie game may not work for you, but hopefully there are some useful takeaways here that you can learn from and apply to your own needs.

First, a little bit of context for Switch 'N' Shoot:

It's a one-button arcade shoot 'em up. Every time to shoot you also change direction, and you move constantly to the left or right.

It's a simple, endless score attack game with 1 point award for every alien you shoot. You die instantly if you touch any aliens, so sessions can last as little as 5-10 seconds, but you can retry instantly.

It's out now for Windows, Mac and Linux on Steam, with an Android beta also available on itch.io and the Google Play Store.

More recently, I've also been working with DSM Arcade who create full-size custom arcade cabinets for indie games. They built me a half-size desktop cabinet to take to events. It features a single BIG, RED BUTTON and some awesome retro-style cabinet art by illustrator Paul Duffield.

Here's the cabinet in all its glory. Don't you just want to punch that button? 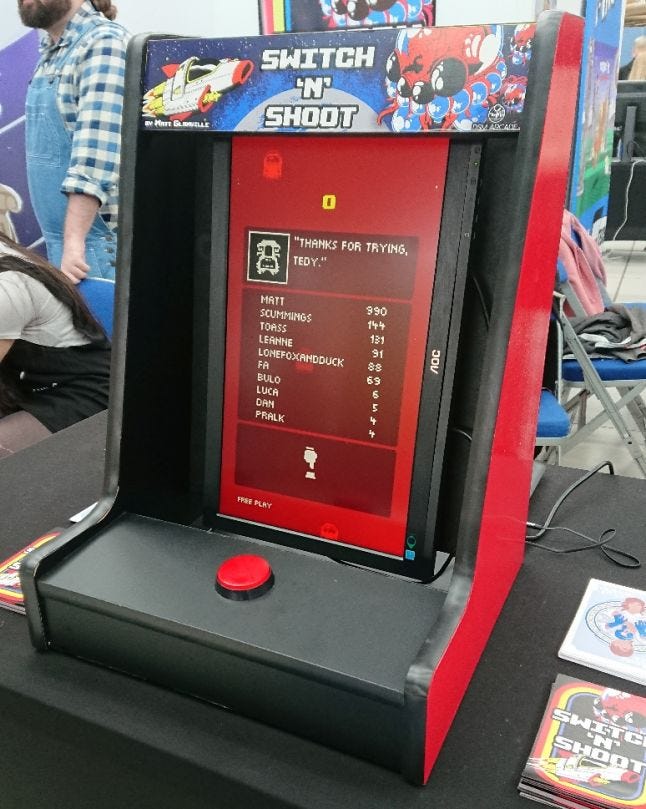 First impressions are everything, and fortunately for me I had a setup that made a strong one.

As I mentioned above, DSM Arcade created an awesome, retro-style desktop arcade cabinet especially for me to take to events. It's bright, colourful, very eye-catching, and the monitor is oriented in portrait mode. It totally stands out among your typical line-up of black flatscreen monitors.

Furthermore, Switch 'N' Shoot is a one-button game, so naturally it had to have a single big, red button on the control panel.

Make sure your display setup looks unique and gets people to start asking questions.

2. It works for individuals AND groups

Some people attend events in groups, while others will be wandering around on their own.

Switch 'N' Shoot is a single-player game, but it's still fun to watch your friends smash that big, red button and goad them when they fail to beat your high score.

It also has a silly random name generator which feeds into the 'flavour text' and leaderboards. Spectating players tend to pick up on this feature while the active player was focused on the challenging gameplay, and it added an extra layer for groups to talk and laugh about.

So if your game is single-player, make sure it still has elements that can entertain members of a group who aren't playing.

3. It works for adults AND children

Children enjoyed punching the big, red button to make things explode and make noises, even if they didn't really understand how to play the game.

Adults got a kick out of the retro design, reminiscing about the arcades of yesteryear and telling their kids about how this used to be state-of-the-art in their day.

There was something for all ages to find appealing and talk about.

4. It doesn't need much explanation

When you sit down with a game that only has one button, there's only so much you will need to figure out. I didn't have to explain the controls, or provide controller mapping hints.

The game is simple enough that - even if you don't get it in your first attempt - you can figure out how it works pretty quickly with a little bit of trial and error (usually less than 10 seconds). I made sure I refined my "here's how you play" blurb which I would concisely tell anyone who seemed uncertain.

5. It reveals its layers bit by bit

Building on the previous point, once players get their head around the core loop they start to gradually peel back the game's layers of complexity.

In Switch 'N' Shoot, the basic mechanics of dodging and shooting aliens with only one button is the first thing players learn.

Once they survive for short time, powerups start appearing. Players don't HAVE to collect the powerups though, so nothing goes wrong if they miss them. But if they DO collect them, they start to learn how the weapon power bar works. This gives me an opportunity to talk about how long-term progression works: keep collecting powerups without missing any. "If you fill up the power bar then you'll progress to the next stage."

I don't need to overwhelm casual players with this tougher layer of challenge, but it alludes to the fact that there's more to the game than the very basic 'move and shoot'. Players get a carrot on a stick for the long-term objectives, but they don't need to understand it to appreciate the simple, short-term, visceral enjoyment of shooting aliens.

The game pretty much runs itself. I made a special tweaked build for events with all menus and quit buttons locked off, and it automatically resets to the flashy title screen if it's left idle for a minute or two.

I try to be present at my game's stand as much as possible, but naturally you have to take breaks now and then, and sometimes you're distracted while you talk to people. It was reassuring to know the game could be left in the hands of beginners without anything going horribly wrong.

7. You get a clear measurement of your performance

Switch 'N' Shoot has a minimal amount of information on-screen, so the thing that stands out the most is the giant number at the top showing you how many points you've scored. And when you meet your inevitable demise, your scored is compared against a leaderboard of high scores.

Every time you shoot an alien, you get a point. Everyone understands this, even young children. It's simple and you can see it at all times. Make it obvious, and it will drive players to do better.

I think this is an important one: when you get a high score it's added to the leaderboard, and it stays there all day (or until someone pushes it off the bottom).

This means the people who really engage with your game have a reason to come back later. They want to see if their score is still there. If it is, they feel good. If it's not, they want to have another go and log a better score.

I noticed a few players even came back 2 days in a row to make sure they had the top score every day that they were at the festival.

It doesn't have to be a leaderboard, but including an element of persistence means players can leave a (semi-)permanent mark on the game.

I'm not saying this to brag, honest. But I realised how valuable it was to have a ridiculously high score at the top of the leaderboard.

It got a lot of people asking one simple question: "How?"

How do I get anywhere near 1,000 points when I'm struggling to even reach double figures? Is there something deeper to this game that I don't know about yet? Are there advanced techniques I can figure out?

One note though: I always made sure I downplayed my skill and tried to make a joke out of it. "I'm the developer of the game, so I've had a LOT of practice.", "I have an unfair advantage." etc. I try to be modest, not arrogant.

10. The game is already out

Whenever I was asked "When is this coming out?", my answer "It's already out on Steam" was always met with positive surprise. Having something downloadable and playable NOW means people can take that important next step A.S.A.P. Some people even downloaded the free beta from the Google Play Store while I was still stood there telling them about it.

Of course, this is not going to be an option for everyone. But if you're showing a game that's still in development, consider having a free demo or maybe give away keys for a closed beta. The people who play the game at your event are going to be strong advocates for your game among their friends and followers. Consider letting them play it at home.

There are two things contributing to this for Switch 'N' Shoot.

Firstly, the single big, red button just begs people to lean over and press it. And then: boom! They're already playing the game.

Secondly, the game is fast-paced and it can all be over within seconds. This means that if someone was just trying the button then they've left the game ready and waiting for the next player, not in some idle state halfway through a difficult level.

It also means that if someone does not enjoy the game they have plenty of opportunities to just stop playing, thereby making room for people who WILL enjoy the game.

Finally, it means that groups of friends can crowd round and take turns in quick succession. No one in the group has to wait long for their turn. And noisy groups are great for creating a buzz and making your game look popular!

So those are the things that worked for me with Switch 'N' Shoot.

If you're in the early stages of developing your game, consider ways you can modify its design so that it hits some of these points. If you're past that point but you're preparing to take your game to some shows, think about ways you can present it to make it work well in that unique context.

Thank you for reading! If you have any thoughts or your own tips please leave a comment below and share them!

And if you want to see more of my work, it's all on my website and Twitter.