One year ago I failed to ship 700 units to stay in business. Now I'm working on my next game after releasing a major update to the original one. A failure post-mortem one year after. Sales, lucky strikes, community support and a heartfelt thank you update
Constantin Bacioiu
Blogger
November 12, 2018

Some of you might remember this blog post on Gamasutra from last year. I wrote it after I shipped my biggest project as an independent developer and, back then, I felt like the world was ending for me. For those of you that haven't read it or know about it here's a short summary: I went in unprepared, with little to no money saved and almost lost my apartment. All that while thinking I can sell enough copies of a low(-ish) priced game while living in an extremely low cost country and with almost a decade of experience writing and making games.

Before I wrote the blog post I was being extremely vocal on twitter speaking with developers like Enichan, Gregg Williams and PixelJam about how hard it is to survive while working fulltime on your games. There were threads running all over the place about indies going broke, studios closing, with almost no return of investment from their projects. To me it seemed that, after pressing the release button, an entire new world was revealed to me: the world of so many failed projects and releases that somehow I never got to read or hear about before joining it. For a second there I was happy I was not alone in this situation and I wasn't the only failure but after reading tweet after tweet and blog post after blog post on the matter my heart ache and their stories really hit close to home. And I blamed myself for not being aware of this, for not researching enough, for choosing to avoid looking at failed stories. So I wrote the now "infamous" blog post that changed everything for me.

The article was published on Gamasutra a day later. I patted myself on the back for "doing something" and thinking that "someone will read it and maybe pay attention to the situation". I went to bed and woke up to this tweet by Amos: 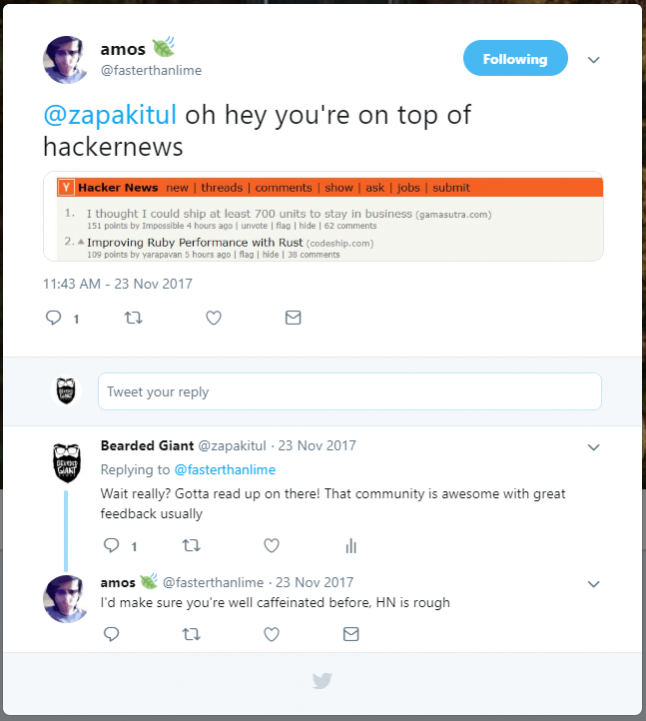 A part of me was excited! I knew the kind of traction Hacker News would bring but I never expected the amount of attention the game got. I'll make this clear for the people looking for sales number: being featured on Gamasutra for 3 days and 1st place on hacker news for almost 24 hours saved my bacon. I went from 120 sales in 3 weeks to around 800 copies sold by the end of November. So if you're reading this post to get some closure and get some hard numbers on the amount of sales that exposure can turn into - there you go.

However this isn't what this blog post is about. I wasn't prepared for a low amount of sales on steam when I launched the game and I sure as hell wasn't prepared for amount of attention and people reaching out to me with support, advice and feedback. For a few days all I could see on twitter was that blog post. My inbox and DM list was filled with offers to port, purchase and outright buy the rights to the game. Offers were flying around from low three digits to almost five. Consultancy gigs, re-sellers, freelance opportunities. Everything was being thrown at me including the kitchen sink.

And that was scary as hell. Overwhelmingly scary. Scared me more than the thought that I could loose the apartment. But from the noise that was my twitter feed for a long, long while, familiar faces cropped up and discussions where had. Thomas Reisenegger offered me a free PR and marketing session on what to do next. Part of his advice was 'You had a ton of success now. Make sure to write a post mortem after this experience to explain to everyone that this was not a marketing stunt. Thank them". And this blog post is here in part due to this advice.

When all the noise settled down I had to think long and hard about what my next steps are. I was out of the woods for a little while, back to my original plan before the blog post. And for a few good days there survivorship bias kicked in. It worked out. My original plan worked. I'm on track towards reaching my goal to keep on doing this. I was given a second chance to screw it all up again.

Luckily enough I listened to my girlfriend's advice and looked for freelancing opportunities and gigs I can get ahold of. Looking back now if I had gone the same route I would have been an even bigger failure on my hand. And I would have seemed like a huge hypocrite. Luckily enough I didn't. I moved across the country to the capital where I took a new gig so I can have money in case I were to fail again.  My revised plan was to not drop the game but continue to improve and update it in my spare time while earning money and being able to sustain myself and pay for the apartment I left behind.

And it was the best decision I could have made. Between my consultancy gigs, main contract and Ebony Spire sales I'm earning 3 times as much as I did in my previous job. And this gave me enough leeway to afford not to rush or jump head first into another project. So I did what I do best: focus on what my players wanted and not let this game die out. I think I said it in an interview with gamefreezers: I'd hate to be the kind of developer that launches a game and stops supporting it. So I kept working on Ebony Spire through out the year, releasing sporadic updates.

I kept getting lucky

I released the game. That first bump is Steam's initial Exposure which was Dwarfed by the Hacker News featuring. The next significant bump in traffic and sales I can't explain. I narrowed it down to finding the game on several torrent trackers with a massive list of comments and praises on the game. After those winter sales hit. By the beginning of 2018 things were looking great. I achieved my target of 2000 copies sold in the game's lifetime so the frequency of updates dropped. I did most of the things that I could have done so I focused on sustaining my business and picked up more freelancing contracts and work for hires.

However, as you can see form the screenshot above, I managed to reach my sales goal not directly through effort and game merit alone. Most of the sales and traffic were due to lucky circumstances. To put it into perspective, I sold two thousand copies by the end of 2018 because:

I was lucky enough to go through disappointing sales at the same time as other prominent or semi-prominent developers who voiced their disagreement. This lead to me writing the Gamasutra blog post which I submitted to hacker news under the advice of a close friend. MY POST DID NOT REACH THE FRONT PAGE and was buried in downvotes. But I was lucky enough for someone else to submit it. I then got lucky to have the game notice and put of for share on torrents with a blazingly positive description of the game linking to the article and have people who initially pirated the game purchase it out of sympathy. So far my game sold not based on it's own merit but due to luck and, if I can call it that, pity. 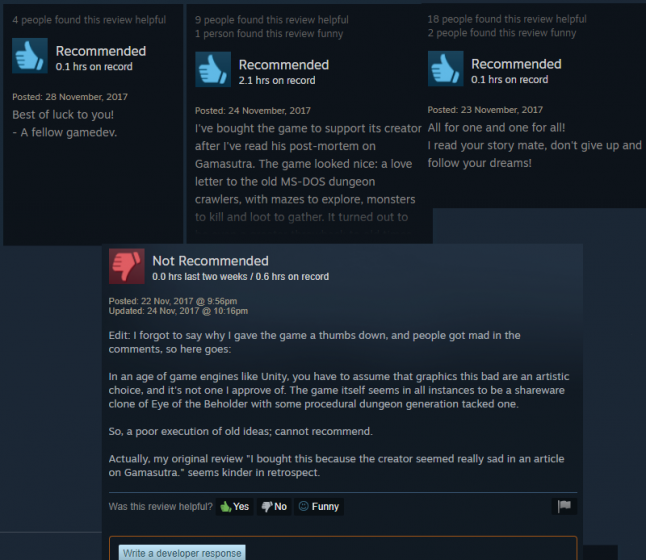 However, something great happened. Out of the sheer amount of people that bought the game in order to support me, after the article? A few of them stayed for the ride. And actively engaged in the game's development. They actively liked the game for what it was. And that got me to continue supporting it over the months that followed. And those little comments? Those @ me's? The feedback e-mails, discord probing and twitter conversations? Helped the long tail of the game happen and oh boy did it turn into something great. Because here's the thing:

It sold over 6000 copies across Steam, Itch and direct purchases

That's right, I had failed to ship at least 700 copies to stay in business but somehow I managed to sell three times as many copies as I thought it would sell in it's entire lifetime. In a single year! And I only became aware of this while I was signing up the game for a groupee's deal. And at least half of those copies sold aren't due to people feeling sorry for me. And I felt grateful and loved and happy. So I decided to thank everyone for making my little bottom feeder dream come true. And I released an update to the game that adds or fixes the things most requested by the community.

The Anniversary Update finally brought mouse support to the game, together with updated graphics (now that I was able to actually afford to pay an artist) and a ton of bug fixes. The update itself sparked a bit more interest in the game again and sales are picking up. Usually I'd hit the 100-200$ mark in a month but it was slowly dipping towards bellow the 100$ threshold. Sales are picking up again and the Autumn and Winter sales are right around the corner. The only time the game stopped making money was during the first two weeks after launch and judging by how things are going, now, at the one year mark I can say: The game was/is a hit (for me)!

One year later: Thank you Gamasutra

A year ago to this day I was a nervous wreck. I was burned out, tired, angry, sad and depressed. I thought there's no way I can turn things around and that there's no hope left for me. I cried, I wailed, I furiously wrote more code and released update after update only to see very little return for my effort. I wrote that blog post on Gamasutra to vent my frustration and to give a cautionary tale to other developers looking to take the jump. My goal was to warn someone, anyone, not to do the same mistakes as I did. And the platform, this blog? It ended up being the reason I can start working on a new game today, with enough financial backing to support myself for a long time and enough experience (and a written blog post) to re-read time and time again if I ever decide to make the jump into full time indie again.

I wanted to make an anniversary update to thank my community of players for sticking around and supporting me. I made this blog post to thank Gamasutra and the community of developers on it for sharing my tale from last year and for all the encouragement I got from it.