​Freedom of expression: A case study of the dialogue systems implemented in The Witcher 3 and Fallout 4

In this blog post I examine the conversation systems in The Witcher 3 and Fallout 4, comparing them and analysing the design and cultural contexts of the systems, and their successes and failures.
Preslav Petrov
Blogger
January 15, 2018

The Witcher 3 and Fallout 4 both came out within the same year, and they were both highly anticipated entries in the rapidly evolving Open World RPG genre. It was a very exciting time, on one side of the ring, we had Fallout 4, a game that almost everybody was talking about, assured that it would surpass even Skyrim in its success. People were madly excited for a new Bethesda title which would surely solidify Bethesda Softworks’ established position as kings of the genre. On the other side of the ring, we had The Witcher 3, a game created by a Polish developer with no previous experience with Open World RPGs and an overall mediocre roster of “cult” games, which were adored by some, but never reached a sizable audience. However, the demos shown at conferences for both games were already hinting at the eventual fall of the Bethesda regime!

Since 2015, The Witcher 3 has completely redefined the standards to which both customers and companies compare the Open World RPG. It was the equivalent of lightning from clear skies and left the gaming public at awe when it released. The game had its problems, of course, but it made a clear statement. “This is what a modern, player-centric RPG looks like!”. It was a game that was in every way exceeding expectations, both in the context of its developer and the cultural context in which it was released. For the longest time, the consensus on RPGs was that you had to either choose expression as your primary aesthetic, or you choose narrative. Nobody believed that these two aspects could be melded together properly, and yet, in that same year, the two biggest entries in the genre would compete for that very same goal. The question was, who could do it properly.

We cannot blame the public for betting their money on Bethesda. They had far more experience and all of the cards seemed stacked against CD Project Red. However, the reality of the situation is that Bethesda failed. Calling the division in their community which Fallout 4 brought about anything less than severe is an understatement. Players HATED, amongst many other changes to the formula, the restriction and simplification of the conversation system. They felt it subtracted from their immersion, that it removed them from their own character, and that the limitation to just 4 options was a sign of Bethesda’s continual “dumbing down” of their franchises. On the other hand, The Witcher 3 was receiving high praise for its characterization, for the connection players felt with the protagonist Geralt of Rivia, and yet, in the game, you rarely get to pick more than 4 dialogue options at any given time, you are not permitted to enter and exit fluidly into and out of conversations like you can in Fallout, and you get the same “description” type options rather than the actual sentence that your character communicates in the end. So, why then are these two games so polarly opposite in perception, yet so similar in execution? This is the question I will be analyzing within this essay.

In order to gain any sort of insight into the problems underlying the Fallout 4 conversation system’s negative reception, we need to look at the expectations that the gaming public at the time had for Bethesda games. After Dragon Age: Inquisition’s failure and the following drop in player trust towards Bioware, it seemed that Bethesda would be the savior, the last bastion for players of single player RPGs. A lot was riding on the success of Fallout 4 after its announcement. Hype for the product reached astronomical proportions (I myself was completely absorbed by this trend myself), to a point where literally no product ever created could satisfy the consumers that were now praying on the game like hungry hyenas.

This would play a large role in the eventual dissatisfaction felt by players, especially returning ones from previous Fallout entries. In this lies also the root of the conversation system’s demise. Most players excited for Fallout 4 were returning players from either the Elder Scrolls series or the Fallout series, both of which were defined (save for New Vegas) by the freedom that they provided to the player in living out a fantasy of their own making. Want to be a ruthless mercenary? You got it! Want to be a feral cannibal out in the wastes? You got it! Want to be a hunter making an honest living? Go for it! This is the experience that players had grown accustomed to and cherished for more than two decades. This is the reason they even played the games, putting up with Bethesda’s terrible bugs, glitches and crashes, a staple of their products on- and, quite frequently even post-launch. 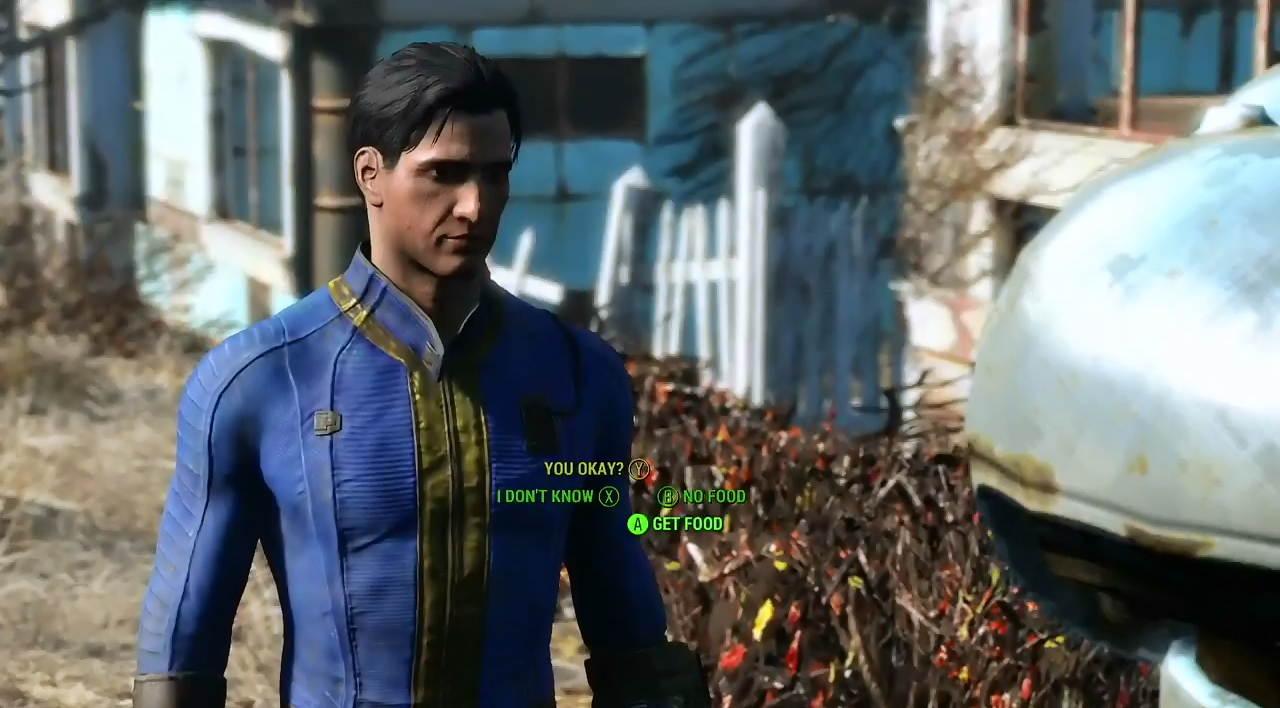 The moment players realized that in this new game, your backstory, your motives and even your voice would not be your own, they felt lost, cheated even. This was not the experience they were looking for. It wasn’t that the idea was bad, it’s that the Bethesda and Fallout brand, along with the game’s marketing completely failed to communicate with the players what exactly they were getting. It did not help that the game falsely alluded to this non-present experience by providing players with the option of customizing their characters, without them realizing that they would not be able to attribute any of these characteristics to the actual identity that the players had constructed for them. Add to that the fact that the game featured a completely voiced protagonist, who unavoidably would convey emotions that players had no intentions of conveying themselves, and you have a pretty good reason as a fan to drop the game and never play it again, or at least dislike it profoundly. Other titles had gone for similar systems and design, like the Mass Effect series, but Bethesda’s failure was unique and came about as a result of their own brand and marketing.

Now let us look at the contrasting success of the Witcher 3. CD Project Red, with their Witcher series, had made it clear from the start that they did not require the player to define their character (I am attributing the creation of the protagonist to the studio and not the writer of the novels because I see them as two separate entities). Geralt has always had clear goals on which the player does not decide, and has from the very first entry in the series been voice acted and independent. He has his own friends, love interests, backstory and even expresses a signature sarcasm and nihilism in all things. In this sense, when a player in The Witcher 3 picks a conversation option, they almost expect and anticipate Geralt’s rendition of their choice, through the lens of his own established character. This is the narrative aesthetic realized in the game. The aesthetic of expression takes a subtler form, in that the player still chooses the outcome and even to a certain degree, Geralt’s disposition towards different events and characters in the game, and, perhaps most importantly, these choices have a resounding impact on these characters and the progression of the story.

In the end, the system employed in the Witcher fits thematically, as well as culturally, within the context of the game and its characters, where Fallout 4 fails to deliver on both of its target aesthetics as well as the cultural expectation that the gaming world has of their products.

Of course, a critique without a proposed solution is just empty words. There are many different ways in which the system and its context might have been changed to better fit the elusive blend between narrative and expression that Bethesda were attempting to produce. In the first place they should have looked carefully at the successes and failures of the last Fallout entry, New Vegas, with which the amazing team at Obsidian almost managed to deliver that same blend that Bethesda struggled with while creating the 4th installment. Even Fallout 3 had our main character posses a defined background of being raised in a vault by a single father. However, in one of these cases, we play as an amnesiac with no connection to his past, and in the other, we have control over the progression of the character throughout his childhood. In both these scenarios, the player has complete control over their character's motivations, goals and ambitions. In Fallout 4, we start the game as a family man/woman, which strictly defines us as family-centered, straight and sociable. This severely limits the player's ability to project a certain character into their virtual avatar. Would a dumb barbarian who cares only about smashing objects have a family? Would a slick seductress who never spends more than a week at the same place with the same man want a family? What if the character the player envisions specifically wouldn't want or require a family? The situation created here is a narrative trap for the player's agency. Wouldn't it have been better if, let's say, we play through that opening scene just the way it is, but once we get out of the cryochamber, the game reveals to us that we have been cloned and made into a synth (of course this might not be lore friendly but those problems would be easily rectifiable). The intro of the game was merely the memories of the person we were created from, they are not binding to us in any way. We are free to express ourselves as new characters, detached from the base one, or we could embrace the story of our ancestor and play the game largely as it is right now. What is important is that in that way, player agency is preserved. Moreover, it gives the player a direction for the story without ever making them feel forced, much like with past games from Bethesda studios. In addition, I would definitely remove the voiced protagonist, as I struggle to find the need for such a character in any Bethesda game. That style of character is more suited for a different style of RPG. And finally, I would bring back the system of transparent dialogue, where your character says exactly what you choose (along with the addition of a greater range of dialogue options and responses). This would probably be the direction in which I would have taken a project such as this, but I would be interested to hear some different opinions as well!