SEARCH
A minimum of 3 characters are required to be typed in the search bar in order to perform a search.
Audio
10 min read
Blogs

When Boiled Down to Concepts: Many Indie Games Suck (Yours Might Too)

We’ll take a look at the different levels of concepts, then I’ll explain how we can boil-down any game to their concepts. When we do that, we might just find that many games aren't very good at all.
Mike Troup
Blogger
June 07, 2016

This post was originally featured over on my blog at StartUpStudioGames.

It takes critical thinking to boil-down, not medium-to-high heat.

When we look at a game, we see the surface level first and foremost. Most people will see the art, the music, the flashy colors (or different shades of grey if it’s an apocalyptic survival game),  the characters, the levels and menus. Gamers will see those things plus the base level concepts of a game. Most will recognize a shooter (does it have guns?), most will still recognize further if it’s an arena shooter, or linear. We can see that a game with swords, magic, monsters, skills and quests is most likely a classic RPG. The basic functions of a game, how it handles everything, can be quickly (and almost completely) understood just by having knowledge of the popular concepts. A sports game will have teams, an arena, goals of some type, and basic rules. This is true for both Rocket League and NBA 2K-whatever.

We’ll take a look at the different levels of concepts, then I’ll explain how we can boil-down any game to their concepts.

The most bare bones mechanics of any game. A Platformer would be “Get to the goal > Access next level” for the traditional run-n-jump ones. Besiege would be “Build device > Accomplish goal”. These are the most important part of a game. We’ll talk later about how many indie-devs completely ignore them.

These are how the Base Concepts are completed. For an RPG a BC might be “Complete Quest”, then the SC for that might be “Player completes an in-world action to accomplish quest goal”. For Mario the BC would be “Get to the goal”, the SC for it is “Get over obstacles and enemies”. Getting over the obstacles is how you get to the goal. This is the second most ignored part of game development, especially so for indie-devs.

These are how you accomplish the Secondary Concepts. For Mario’s SC, the TC for ‘Getting over obstacles’ would be ‘running and jumping over/on the obstacles/enemies’. The farther up the pyramid you go, the more precise the definitions become. These are the concepts that change a lot between games, but not as much as they should. A good example would be shooter game-types.

Almost every single shooter (that isnt an rpg) has these. That’s not to say it’s a bad thing. Well, it’s not a horrible thing I guess.

These are what really sets game apart because they are the most different between games. These are the tangible (You can see/”touch” them) concepts. The ideas that control the flow and feel of the entire game. Let’s look at an example using RPG’s. We have two RPGs, and both of them have the same TC:

However, their Superficial Concepts are wildly different. Because of that, the entire feel of the game is different. 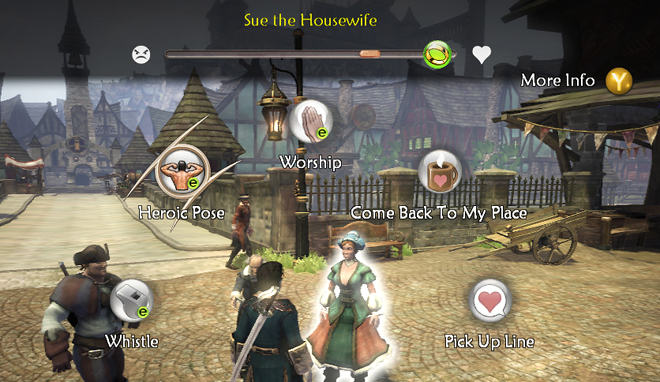 A lighthearted and fun game. (Especially the first, amiright?) Yet, still has the TC that I listed. Almost the entire tone of the game is fun and light, even the deep moments and impactful ones.

Still has the TC discussed, but very different in tone. If you allow yourself to be drawn into the world and story, it can feel like a totally different experience than Fable. It is also one of the best games ever created in my opinion. (Sets the bar for amazing stories and worlds at the same time). It is dark, and can be depressing at times. It tackles tough subjects like abortion, domestic violence, misogyny, and the complexities of family relationships.

Despite the fact that the Superficial Concepts seem to change the feel of the game the most, I would argue they are the least important.

Here is where we start talking about one of the biggest issues the thousands of indie-devs make. “If the Superficial Concepts aren’t the most important, what is?” you might ask you inquisitive beast. Secondary and Base Concepts.

I’ll start with the fact that many people enjoy games that provide small bursts of fun, and aren’t looking for substance. There’s nothing wrong with that. However, I am looking for more most of the time. Not only in the large story driven games likes Witcher, but also in the small ‘arcade’ games. I believe there is no reason to not do something innovative, even for the small fun time wasters.

This article all started when I was scrolling through my twitter feed and I saw these guys promoting their boat racing game. They seemed so excited about it and legitimately believed that had made a good game. I took a look at it. I realized that when you strip away the top layers, all they really made was a racing game. I’m not trying to insult them, but we as gamers and developers need to start being honest with each other and ourselves. What they had, what they put so many hours of hard work into, was nothing but a basic racing game when it came down to it. Because of that, it’s an utterly useless game. They made this mistake because they focused so hard on the Superficial Concepts and the Tertiary Concepts. They probably didn’t even realize that their game, when looking at the Base and Secondary Concepts, was the same that has come a thousand times before. Something that will bring the players nothing substantial or new. They might be proud of the ‘cool powerups’ and exciting levels or the large selection of vehicles! The fact is, none of those things come close to Secondary Concepts. They are all Tertiary. All these little additions people add to make boring Base Mechanics fun are useless. A boat with a Speed-up powerup is still just a boat, but now it’s going a little faster. Exciting!

I’m going to keep breaking down before I build up. Another example is a 2D platformer/shooter that I saw on Greenlight (I try to vote for 5 titles every day). It had amazing visuals, awesome lighting, and the way the guns and bullets interacted with the world was super cool to look at. So, on the surface, it was awesome! Right? Let’s boil it down. Take away the visuals. Take away the lighting. Take away the fancy bullets (because they are, in base form, just bullets). Take away the wow-factor from the visuals (which provide approximately 0.8 second of worthwhile experience). Strip all of that off and boil it down. It is now a basic platformer, with basic goals, and a basic execution. Just like the games that have been done for years before. All of this amazing work went into this beautiful game that was, at it’s base, nothing new.

The visuals of a game are functionally useless to it  (Not including the incredible vistas and locations that are crafted by skilled individuals to be beautiful and amazing). They grab the player, but quickly die out and then give way to the gameplay mechanics to deliver the fun/emotions. This is not a problem. This is not a broken system, so don’t go trying to find a way to fix it and get more fun from visuals.

Indie Devs too often think that a good looking game is enough. It is not.

Not only do many think that unique visuals are enough, they change some tertiary concepts and think to themselves “This feels like a unique experience!”. That is where, I feel, they fail. It is absolutely not enough, not for a truly good game. I’m not saying Indie-devs need to work harder. We work hard enough! I am saying:

Change where you place your importance.

Next time you start a game, or take your current game, and boil it down. To the absolute Base and Secondary concepts. Look at these concepts. Imagine the game was made using only square, grey cubes. Play that version in your head. Imagine other people playing it. If it’s not fun and not a unique experience, you are not creating beautifully new. You can do better! I know you can. Use that big thinkin-box you got there and push yourself to create something unique and new.

If your game would not be even a little fun to a group of people as plain, grey boxes, it will not be a fun game.

Now, the Tertiary and Superficial Concepts come together to take great mechanics and form an amazing experience. You cannot have a full experience without them (for the most part), but just remember they are not the most important part. They compliment your new and exciting game mechanics.

Now, I am not just sitting here telling you how to do things while never touching a game myself. In fact, my current game is one of the biggest factors to this article. It has shown me how you can have very, very simple Tertiary and Superficial Concepts, and change around and mess with the Base and Secondary, and come up with an amazing experience. It was created with that goal in mind. To provide a fun and new experience to the player by manipulating justthe Base and Secondary Concepts.

In my game Wrong Dimension, you play along a single axis. You can only go up and down. I challenged myself to make such tight restraints fun. According to my playtesters who refuse to let me stop the game until they “Just beat this one last level“, I think I’m doing something right. It is in alpha, but even so far, this simple game provides a wide variety of strong emotions and intensity. Just watching other people play, Im gripping my seat and watching intently as they make the final run to the exit with hardly any health left and a dozen enemies between them and the next level.

In our play sessions, the room has erupted in screams of shared agony as the player died just feet from the exit, or woops and hollers and high fives when they make it to the next level alive.

I want to be clear that I am not exaggerating any of this. My point is that I have gotten these types of reactions in a game where you play on a single line.

People have had those reactions to the game because I concentrated on the Base and Secondary Concepts. Because, at it’s absolute core, in it’s most basic form, Wrong Dimension is fun.

Realize that I am not saying to create completely new gameplay mechanics all the time. There is no need for that. What I am saying is change things. Take something that people know and love and find a way to make it new. A way to experience it in a new way. Wrong Dimension takes the basic platformer mechanics, and changes them around just enough to provide an experience that feels like something brand new. Your game can do the same with it’s base mechanics.

Wrong Dimension is currently in alpha and can be found here on Itch.io. And here on Steam Greenlight. Every purchase helps us craft this game and continue our efforts to bring new experiences to gamers everywhere.