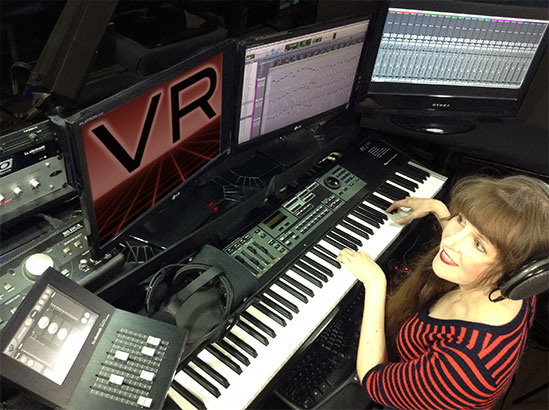 As a video game composer, I've been working in my studio composing music for quite a few virtual reality projects lately (as pictured above), so I've been thinking a lot about issues related to audio in the VR environment. Those issues include how gamers experience the audio content through various headphone models. In this article, I thought we'd take a look at three newly-announced headphone models that are targeting the VR marketplace, and see what new technologies are being proposed to facilitate the best and most awesome VR audio experiences. So, let's get started!

The iSINE Virtual Reality Headphones made their debut in January of this year at the famous Consumer Electronics Show in Las Vegas. These in-ear headphones (pictured right) ship with both HTC Vive and Oculus Rift compatible cables (in addition to a standard audio cable). At first glance the iSINE Virtual Reality Headphones seem to offer no specific or overt accommodation for VR, apart from the handy cables. A quick review of the web site reveals a headphone technology that relies on simply delivering great audio quality that exceeds the capabilities of other competing headphones. However, when we dig a little deeper into the specifications, we see that the core technology of the iSINE headphones has a very specific application in the world of VR audio.

Planar magnetic technology is touted as the driving factor behind the iSINE's ability to deliver more convincing 3D audio for VR. Most headphones on the market today, from the cheapest to the most high-end audiophile models, deliver their sound by virtue of the most popular driver type: the standard dynamic driver, also known as the moving coil driver.  In a standard dynamic headphone design, a wire coil is attached to a diaphragm and suspended in a magnetic field. The audio signal is passed through the coil in the form of a current that causes the coil and the attached diaphragm to vibrate back and forth, generating the sound waves that we hear. 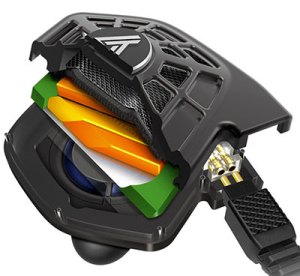 The Audeze iSINE headphones eschew this type of driver in favor of the less commonly used planar magnetic technology, which you can see in this internal view of the iSINE headphones (pictured left). In the planar magnetic driver configuration, wires are embedded directly within a larger membrane. The embedded wires are surrounded by two sets of oppositely aligned magnets that are pointed at each other, creating a magnetic field. When the audio signal current passes through the wires embedded in the membrane, a second magnetic field is generated. This field reacts to the field created by the magnets and the opposing forces generate vibration in the membrane, which creates the sound we hear.

To visualize this explanation a little better, let's watch this video from headphones expert Tyll Hertsens (editor at InnerFidelity.com), who takes apart another pair of planar magnetic headphones to show us the inner workings of the technology:

For the purposes of delivering convincing VR audio, the primary advantage of a planar magnetic driver is to be found in the way in which the sound travels. Sound from a standard dynamic driver will typically travel in a 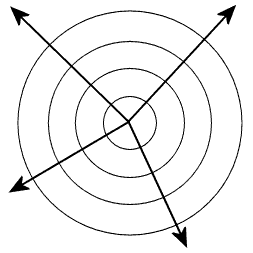 spherical wave front, originating from a single point and traveling outward in all directions (pictured right).  In sharp contrast, the sound from a planar magnetic driver travels in parallel waves that proceed only in the direction in which they are pointed.  According to Audeze, these parallel, unidirectional sound waves are crucial to the enjoyment of 3D audio in the VR realm.

The spherical wave front of typical headphones delivers the sound waves in a cone shape that interacts with our ear canals in ways that wouldn't occur in the natural world. 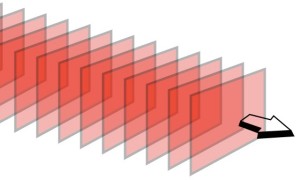 The planar wave front (pictured left) delivers sounds into our ears in a straight line instead of a conical shape, and this comes across as much more natural and realistic. Also, the more natural interaction of the sound waves with our ears allows us to more easily localize the origin of sounds in our environment, leading to a more satisfying and convincing 3D soundscape.

After their release in January of this year, senior editor Vlad Savov spotlighted the excellent spatial positioning afforded by the iSINE headphones in his review article for TheVerge.com. "If you want soundstage — the sensation of music and sound surrounding you; the feeling of distance, depth, and separation between the various instruments and sound sources — the iSines have it in abundance."

To my mind, the most interesting aspect of the iSINE headphones is the focus on planar magnetic technology as an important enhancement for satisfying three dimensional sound. As far as I can tell, Audeze is the only company connecting this specific technology with the idea of better spatial positioning for VR audio. It will be interesting to see if other audio gear makers adopt this technology for VR applications.

While the Oculus Rift VR headset shipped with a set of on-ear headphones built directly into the device, the same could not be said for its competitors. The HTC Vive and the PlayStation VR arrived in the marketplace without any audio delivery system, leaving users to pull together their own solutions. Wearing a separate set of headphones on top of a VR headset could cause discomfort as the two head-mounted devices squeezed against each other, and the extra dangling cables could be a hassle.

Now help has arrived in the form of two audio solutions for the Vive and the PSVR that are designed to attach directly to their respective VR headsets. The Mantis VR (developed by the Bionik gaming accessories company) is designed with spring-loaded clips that attach to the headband of the PlayStation VR. The Mantis VR was designed in the same black and white color scheme of the PSVR headset, allowing the Mantis headphones to blend in and look like a built-in component of the device. While they look attractive, there is little information provided regarding their audio specifications, which should lead us to assume that these headphones are of a basic, serviceable variety without any technological tweaks to accommodate VR audio. Here's a video in which Bionik head of marketing Crystal Duggan demonstrates the Mantis PSVR headphones:

Again, the audio quality of these headphones is never addressed by the manufacturers, and according to a review in PCWorld.com, "Deluxe Audio Strap’s sound quality is “good enough” for most people and purposes." Definitely not a glowing review, but the quality of the audio may not really be a major consideration for either the manufacturers or the intended audience. It seems that this device was meant simply to address an oversight in the original design of the HTC Vive. Audio is now provided, and that may be enough to make some Vive owners happy.

So, that concludes this article that gathered together some of the new developments in VR headphones that might interest us as video game music composers. In my next article, we'll be revisiting some VR headphones that were announced last year. We'll check in with the OSSIC X, the CEEKARS VR, the Entrim 4D and the Plantronics RIG 4VR, and we'll see how development on these VR headphones is progressing. Until then, please let me know what you think in the comments below!