On April 6th, composer Winifred Phillips delivered the 1st game music composition lecture ever given at the Library of Congress, as part of their first-ever video game music event. This article includes a partial transcript of the lecture's Q&A session.
Winifred Phillips
Blogger
April 17, 2019

In my presentation, I included many topics that I've written about in previous articles.  My lecture topics included horizontal resequencing, vertical layering, and interactive MIDI-based composition. I explored the various roles that music has played in famous games from the earliest days of game design (like Frogger and Ballblazer).  I also discussed how music has been implemented in some of the awesome games from the modern era (like one of my own projects, Assassin's Creed Liberation).

My lecture was supported by a full house in the Whittall Pavilion at the Library of Congress. The audience gave me both a warm welcome and lots of great questions following the conclusion of my lecture.  Afterwards, the discussion continued during a book signing event that was kindly hosted by the Library of Congress shop.  During the book signing event, I was pleased to sign copies of my book A Composer's Guide to Game Music. I also got to talk personally with quite a few audience members.  Such an engaging and insightful crowd!  It was a pleasure getting to know these lovely people.  I really enjoyed the lively conversation – I had the best time!!

The video of my full lecture will be posted on the Library of Congress web site within the coming months.  However, I thought I might offer a preview in the form of a partial transcript including some of the top questions from the Q&A session that followed my lecture.  So here are some of the questions that were posed – starting with a question about a topic of great importance to the Library of Congress – copyright protection for artists!

Question: I know copyright is a big thing, so I was wondering how do you approach that?  So that you can avoid having the copyright issues?  At least from your experience?

Phillips: Copyright is a very interesting and important aspect of our work.  A lot of games are structured specifically around the idea of using licensed music. I’m sure you can think of a lot of Electronic Arts sports games in which music is introduced for the first time.  You find a band that you really love by playing one of those sports games. That’s been a really big avenue for young artists to make their start, and it’s been great for the music community at large.

No game developer wants to find out that they’ve used a piece of music and that they haven’t secured the rights appropriately.  Particularly if you’ve fallen in love with a track.  You’ve incorporated it into your game, and (oh God forbid) you’ve actually structured your gameplay around it.  Then you find out you can’t use it!

It's great that the Library of Congress has served the artistic community for so long in making sure that artists are protected.

Question: What challenges do you face, or conventions do you follow, when you are mixing down a dynamic piece of music for a retail CD release? Or for a promotional material?  How do you make that stay interesting to the listener, if it's not as dynamic as it once was?

Phillips:  When you’re composing music for a game, you’re essentially composing a lot of different bits and pieces.  You know that during gameplay they’re going to be triggered by the progress of the player.  So it’s essentially a flexible, fluid story.  I try to think about the most impactful course that the player might have taken through that level...  through that piece of music. Then I will construct in my music production software an ideal course, an ideal way to go through it.  I’ll mix it so that it becomes a memory of the experience of playing that game.  A lot of the people who buy these soundtracks are people who have played the games.  They want to own the music because they want to relive the experience.  That’s what I’m thinking about when I’m pulling all of the interactive elements together.  I want to create a sort of ideal listening experience.

Phillips:  There have been projects where I’ve used it just in the mockup stage at the beginning. Then the project has gone on to record with a live orchestra.  So that’s always fun. But then there are other projects where the budget is just not going to accommodate that.  One of the things that’s important to me as an artist is the option to work with both large studios and also indie teams that don’t have the same kind of budgets. It allows me to do a wide range of projects that are exciting and creative.

To make an orchestral sample library sound satisfying and realistic requires a minute attention to details.  Also, a really good understanding of how sample libraries work.  How live musicians play. Then, you can approximate the sound in a way that’s going to feel satisfying for listeners.  On the other hand, when you’re dealing with a live orchestra, you really want to be able to take advantage of the strengths of that medium, and appeal to the expressiveness that a live orchestra or live soloists can bring.

Question: As someone who plays musical instruments but who has never composed – if I were to try to make an indie game or something and I wanted to make my own music – what kind of recommendations would you have?

Phillips: I’ve seen development teams in which the main developer also creates the music.  There have been some really interesting games that have been created that way.  If you are a musician creating a game, you can sense how the music fits into the mechanic of the game – since you’re creating both.  So that’s something that I’ve seen done.  But I do think that if you haven’t composed before, it might make sense to try to start doing some of that first, before you try to bring those two elements together.  They're 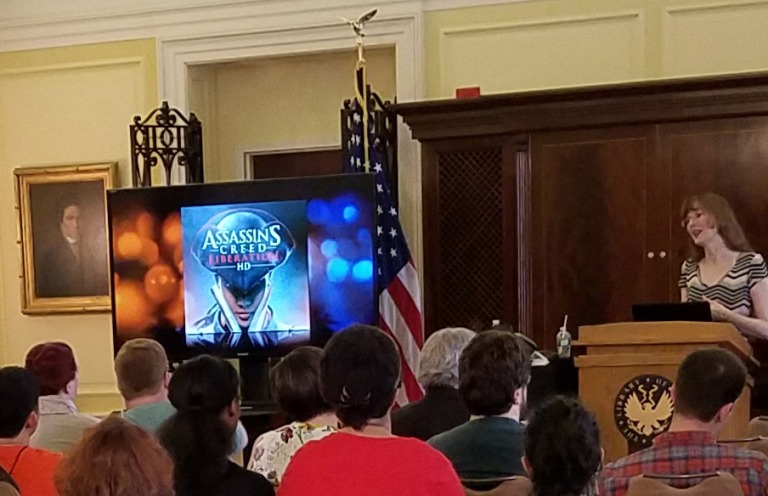 If you are familiar with any student teams, or teams that are involved in game jams, you could get involved in that.  A game jam is one of these events in which all of these game developers come together to create games on the fly really quick.  It's actually a lot of fun, because it becomes a way to be very creative and solve problems right on the spot.  It's also a fantastic opportunity to jump into a team right away as the composer.  You get an opportunity to just think about that part of the game, to create the music within the structure of a team.  I think you’d learn a lot about what goes into music composition for games.  Do that first – before you put the thousand ton weight on yourself by doing both things at the same time.

Question: Given the gaming consoles and other platforms have grown so much in terms of their capacity, what limits do you feel are placed now (or still) on your budget?  And what’s your response then, in terms of strategies that you bring to increase your expressiveness?  What resources are available, while still remaining within the resources allowed?

Phillips: That definitely becomes an issue from project to project.  I can’t honestly think of a single project I’ve worked on when budget doesn’t become a factor, even when the budgets are very large. There’s always the opportunity for your ambitions to explode beyond the boundaries that any game budget can accommodate.  At that point you triage the situation.  You look at it and you say, 'how can I maximize the potential of a smaller amount of music? How can it provide coverage for a game and not become too repetitive – too annoying?'  You don’t want your music to become a negative. You always want it to be something people love.

I've talked about vertical layering, the idea of music broken apart into its individual layers that can be used separately.  That makes one piece of music more flexible to cover a larger amount of time. It can morph and change and become more adaptive to what’s going on.

On the other hand, there’s also the quite valid consideration of when music should settle back into silence. That gives the player room to absorb the moment. You strategically place music in those positions where it's going to have maximum impact, where it's going to be meaningful. You can still have a satisfying musical experience in the game without needing an enormous budget to accommodate it.

So those are two approaches that can address the problem.  But it’s a continuing problem.  Every game development studio wrestles with it at one time or another. We’ve all got the hope and the yearning to do something really special with music.  A lot of the times we can!  Sometimes the restrictions can make us be creative in ways we couldn’t have predicted.  That is the way to grow as a development team or as an artist and composer. So these challenges can serve to make us grow and become better.

Popular music from composer Winifred Phillips' award-winning Assassin's Creed Liberation score will be performed live by a top 80-piece orchestra and choir as part of the Assassin's Creed Symphony World Tour, which kicks off in 2019 with its Los Angeles premiere at the famous Dolby Theatre. As an accomplished video game composer, Phillips is best known for composing music for games in five of the most famous and popular franchises in gaming: Assassin’s Creed, LittleBigPlanet, Total War, God of War, and The Sims.  Phillips' other notable projects include the triple-A first person shooter Homefront: The Revolution, and numerous virtual reality games, including Scraper: First Strike, Dragon Front, and many more.   She is the author of the award-winning bestseller A COMPOSER'S GUIDE TO GAME MUSIC, published by the MIT Press. As a VR game music expert, she writes frequently on the future of music in virtual reality games. Phillips' is a sought-after public speaker, and she has been invited to speak about her work as a game composer at the Library of Congress, the Game Developers Conference, the Audio Engineering Society, the Society of Composers and Lyricists, and many more.