Video Game Deep Cuts: Vectoring In On The Hellblade Observer 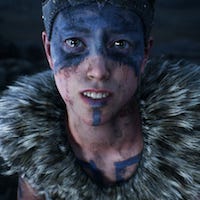 This week's highlights include multiple videos on Ninja Theory's Hellblade, the enduring micro-indieness of Vector Unit & the cyberpunk strangeness of Observer.

Lots of depth again this week - there's just so much beautiful content out there. I particularly liked the Eurogamer story about finding Destiny's Lighthouse, because it shows that even people who spend 600 hours on one game can discover hidden depths in that game that they can barely even reach. Like I said - almost infinite detail, & you'll never get to it all - so read my attempts to precis it, eh? (Oh, and last week for my Storybundle, don't forget!)

The People Who Never Gave up on Sonic (Caty McCarthy / USGamer)
""For any other game community, Sonic '06 or any game equivalent like that in any other franchise would have been the absolute, 100 percent killing blow," Sonic subreddit moderator David Manzolillo told me over Discord. "Something as catastrophically bad as that would have just ended pretty much anything else.""

Sound and Light: Return to the Arcade (Grass Fed Cinema / YouTube)
"A short documentary on the current arcade resurgence and how two Midwest independent companies are developing brand new arcade games to meet the demand."

A fantastic year-by-year IFComp retrospective (IFComp News)
"Brian Rushton, author of last year’s second-placer Color the Truth as well as other work, has written a series of posts to the intfiction.org forums that look back on 22 years of IFComp history. He applies a modern viewpoint throughout, noting the origins of lasting trends and technologies, and tracking the creative velocities of individual IF authors over the years. [SIMON'S NOTE: this is a totally wonderful history of notable (non-paid) text adventures & related creations over the past 20+ years!]"

Searching For Absolution In Observer (Javy Gwaltney / Game Informer)
"Observer fits quite nicely into its grimy Cyberpunk box. It's a game that tackles all the familiar themes and tropes of the genre: evil corporations and the rebels who rise up to fight them, the horrific body politics of cybernetic augmentations, the crushing mental weight that technology can have on a single human being."

The indie games are too damn cheap (Sergey Galyonkin / Medium)
"An average indie title these days is priced $8.72 on Steam. During the last Summer Sale the price went down to the mind-boggling $4.63 and yet the average sales are at their lowest at 21,000 copies."

Why Hellblade: Senua's Sacrifice Is More Important To Gaming Than You Think (Tamoor Hussain, Adam Mason, and Sam Leung / GameSpot)
"Hellblade developer Ninja Theory discusses life after DmC: Devil May Cry and how it's trying to bring back AA games. [SIMON'S NOTE: it's striking how successful this game has been - I was a bit skeptical, due to subject matter & flood of games out there, but looks like they really did it!]"

The Most Important Game of 2017 (Raycevik / YouTube)
"[SIMON'S NOTE: slight spoilers - it's... Hellblade, same as the video directly above. An extremely in-depth analysis of why people are seriously enamored with this game.]"

The Mysterious Case of the Missing Internet Billionaire (Yoolim Lee / Bloomberg)
"A dozen years ago, the largest internet company in China wasn’t Alibaba or Tencent, but game developer Shanda Interactive Entertainment Ltd. Its founder was a young man named Chen Tianqiao, who had become a billionaire at 30. Chen was more prominent than Alibaba’s Jack Ma for much of the last decade -- then he disappeared."

'LittleBigPlanet' Studio Head Discusses What's to Come For 'Dreams' (Keith Stuart / Glixel / Rolling Stone)
"Media Molecule does not really work like other developers. The studio behind beautiful handicraft adventures LittleBigPlanet and Tearaway makes games about creativity... Which is where Siobhan Reddy comes in."

A Chinese Video Game Rakes In Cash — and Draws Young Rule Breakers (Carolyn Zhang & Paul Mozur / New York Times)
"In China, teenagers can purchase a fake ID online for as little as $2. Is it for buying booze? Subverting the state? Many simply want to play a game on their phones. More than 200 million people in China play Honor of Kings, the social media-focused app that has become the biggest moneymaking smartphone game in the world."

The Lamb of Columbia | The AI of BioShock Infinite's Elizabeth (AI & Games / YouTube)
"In this case study I take a look at the creation of the companion character Elizabeth Comstock from the 2013 game 'BioShock Infinite', developed by Irrational Games. 'Liz' is a reactive and engaging non-player character who interacts with the world around her. In this video I discuss the multi-disciplinary approach required to bring her to life."

Desperately seeking Destiny's Lighthouse before it switches off forever (Tom Philips / Eurogamer)
"Three years since Destiny's launch, after more than 600 hours of playtime and countless articles on Eurogamer, one thing in the game was still eluding me: a trip to the ultra-exclusive Lighthouse. It is a location in the game reserved for Destiny's elite players - in other words, not me."

How A Board Game About Bitter Legal Struggles Became A Bitter Legal Struggle (Rolling Bishop / The Outline)
"On January 29, 2015, Andrew Yoon, 29, went to McKinney Falls State Park in Austin, Texas with his cousin, Seung Hyun Yoon, and a friend, Kayla Atkins. They decided to go swimming, a fairly common activity at the park despite signs cautioning against it, and took turns jumping from the rocks into the water below."

State of the Art: The Long Dark’s aurora (Philippa Warr / RockPaperShotgun)
"So how did the design of the aurora develop. how did the team balance beauty and hostility and DID YOU KNOW that the Aurora Borealis makes a noise in real life that Hinterland incorporated into the game?? Here’s creative director Raphael van Lierop to explain more in our latest State of the Art feature!"

How small-scale studio Vector Unit optimized for big-scale success (Jon Jordan / Gamasutra)
"It’s tiny, but during 10 years of operation, the core three-person team has released eight arcade racers across nine platforms, in both paid and free-to-play versions, all developed using its own engine technology. Maintaining this level of output as well as independence keeps the team passionate, says creative director Matt Small."

How death influences Alexis Kennedy's writing on Dragon Age 4 and other games (Kirk McKeand / PCGamesN)
"Alexis Kennedy is afraid of the sea. His best-known game, Sunless Sea, is about a dangerous Lovecraftian ocean - yet, in it, the camera takes a bird’s-eye view, pulling players safely away from the cold embrace of its dark depths."

It's A Great Time To Jump Back Into No Man's Sky (Andrew Webster / The Verge)
"But while I was away from the game, it changed quite a bit. Developer Hello Games continued to add new features to No Man’s Sky through free updates, as things like base-building, planetary vehicles, and a permadeath mode, were added to the experience. This culminated last week, with the release of the game’s 1.3 update, which introduced basic multiplayer, portals to warp between planets, and a much-needed revamp of the game’s story. [SIMON'S NOTE: interesting to see public opinion swing back (somewhat) in Hello Games' favor.]"