The Design Laws of Ephemerid

Ephemerid started with a simple idea that Matt had one day: wouldn't it be interesting if you pressed your finger down on a touchscreen and a little creature flew over and landed on it?
Brent Calhoun
Blogger
August 08, 2014

Ephemerid started with a simple idea that Matt had one day: wouldn't it be interesting if you pressed your finger down on a touchscreen and a little creature flew over and landed on it? There was something really tactile about that feeling of reaching into a screen. From that seed we started thinking about how to extend that one interaction into a full game. Thus, "Ambiguous Creature Project" was born. 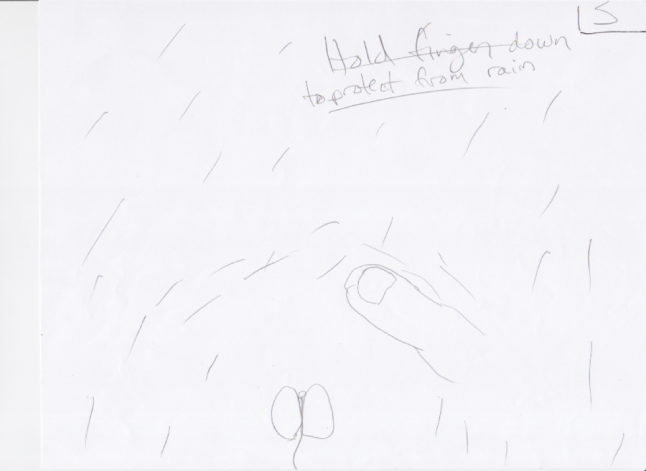 We started creating little interactions: maybe once it’s landed on your finger you could take it over to a little branch, maybe after that you could feed it some berries. We began to envision the game as a series of these interactions. A sort of experimental art game that focused on a feeling of connection to a game world above all else.

And so, "Ambiguous Creature Project" begat "Flutter". We quickly ran into some problems. The first issue was that any sort of text or UI elements felt unnatural. They broke the spell. So we coined our first Law.

THE FIRST LAW: THOU SHALT NOT USE TEXT OR UI IN THE GAME.

And it was good. This solved one major problem, but it exacerbated the other major problem we were having. It was unclear to the player what the hell they needed to do. At this point, Matt had written a few songs for the game and we landed on the idea of tying the gameplay into the music. This led to Matt and me sitting on a couch and just listening to the music over and over again on repeat in front of a whiteboard, doodling and sketching the ideas that the music gave us. 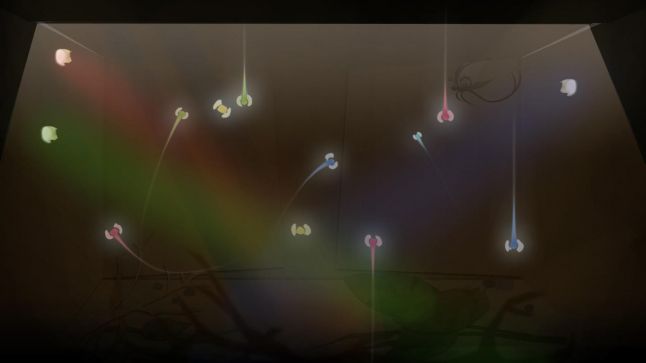 We settled into rhythm building the game around the music. This process allowed us to create scenarios that both were very different from anything we would have invented without the music and were intrinsically tied to the gameplay in novel ways. When we nailed it, it gave the game an almost hypnotic quality. The music became our voice, our way of communicating to the player, in lieu of words or abstract lines and dots. The best part was, while the words and UI had broken the spell, the music amplified it. This became our second law.

THE SECOND LAW: THE MUSIC IS ALWAYS FIRST. ALWAYS.

Building the game around music was a big breakthrough for us, but there was one last major piece of the puzzle that we needed: the look of the game. We wanted something simple, colorful, and tactile. Something that people would feel encouraged to reach out and touch. Most importantly, it needed to be an art style I could execute with my limited talents. The answer we settled on was paper. It was tactile and pleasant and just felt right for a touchscreen game. 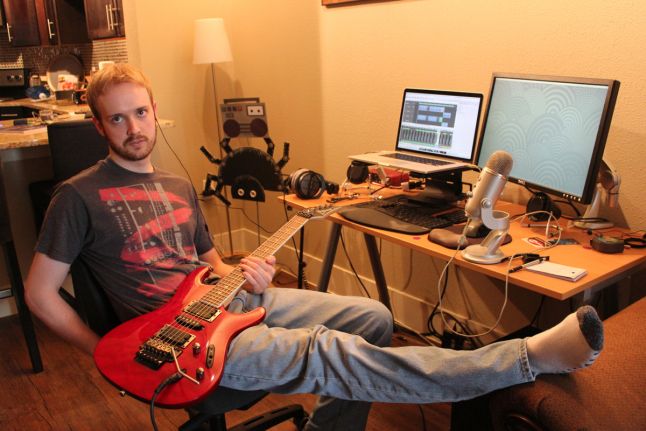 A musician in his natural habitat

One thing I decided was that if we were going to make a paper game, I didn't want to cheat. I didn't want to simply lay a paper texture over models and call it a day. I wanted the game to feel authentic and handcrafted. Personal. To achieve that, we needed the imperfections that come from hand cut paper. Fortunately, it turns out that imperfection is sort of a specialty of mine. I got a DSLR and built a stand so it aimed straight down at my desk and got to cutting.

THE THIRD LAW: MAKE EVERYTHING OUT OF HANDCRAFTED OBJECTS.

Once our third law was in place, a lot of our design challenges became clear. We had a roadmap to follow and "Flutter" begat “Ephemerid: A Musical Adventure".  I was forced to come up with interesting ways to build a world out of paper. I also began to use chalk, pastels, and painted glass as creative solutions. The limitations helped me keep a coherent look to the game from level to level. The end result has a sort of honest nature to it that I am happy with. 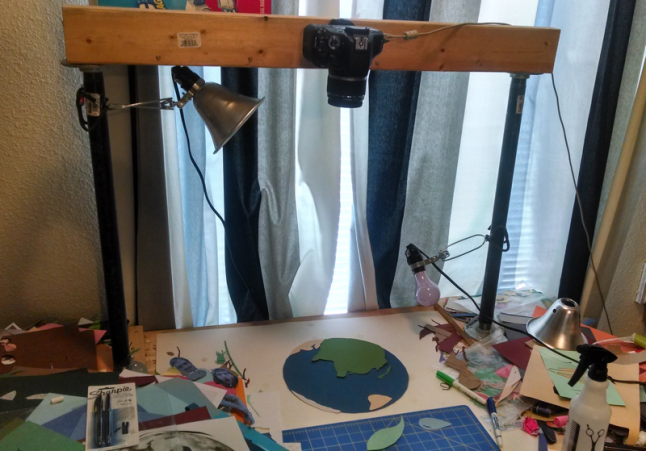 The music helped shape the game; both in gameplay and in the narrative that we began to form as we strung the songs together in order. Removing the UI from a music-based game exposed some interesting things. Most music and rhythm games heavily rely on UI. Games like Rockband or Elite Beat Agents are very abstract. You are interacting with lines and dots while a movie plays. Your actions aren't really connected to the world. By following our first law, we forced ourselves to push the gameplay into the world. This means that, for the player, interacting with the music and the game are one and the same. Again, this seemed to have an amplifying effect on the connected, hypnotic feeling we were trying to create.

Music games excel at engaging a player. The music draws a player into the interaction and the interaction reinforces the music in a sort of feedback loop. It seemed odd to us that while rhythm games typically excelled in getting players into a groove, they did a lot of things to rip people out of it. Mistimed inputs result in either omitted notes or, even worse, discordant ones. This drove Matt crazy. He felt that if an artist wrote a song in a particular way, deviating from that to punish the player was tampering with that musician's work. He wanted the notes he wrote to play the way he wrote them, thank you very much.

Of course, rhythm games typically go even further than just discordant notes. Miss too many inputs and you fail the song and have to start over. I think most people have had the experience of playing Rockband with a group and had a great time until the drummer missed too many notes so everyone fails. That scenario was such a mood killer that Rockband 2 created a no-fail mode specifically for such situations.

Being forced to replay a level over and over again destroys the spell. Forcing players to start a song over and over again was most certainly not putting the music first. As an aside, I think another genre that really has to wrestle with fail states is horror games. They are also trying to cast a spell on players and the tension of running from an unspeakable monster is undercut somewhat when you die and are reloaded at a checkpoint for the 5th time in ten minutes. It's like being in a haunted house where they turn on the lights and rearrange things periodically. Hard to keep the terror going.

So we made the big move to create a game where the player could never fail. To someone who has played games for his entire life, the idea felt pretty radical. Matt had less of a misspent youth, so to him it seemed natural. The thing our game excels at is engaging a player, so why would we ever do anything to mess with that?

I had a chance to see Ben Esposito talk about his work on The Unfinished Swan. As a player was walking down a treacherous-looking winding path, I asked him what would happen if the player fell. He said not much, they will just instantly respawn back up on the path with no penalty. He said that if they had guardrails there, it would make players feel too limited. Instead they could just rely on creating a sense of danger to shepherd the player along. When people are in the moment playing a game, most of them will bring their own tension to the table.

Most people, if they are having fun and engaging with the game, don't need the specter of failure to motivate them to continue. They continue, because play is fun. Our game has been described as having a childlike quality and I would like to think that the fact that we create play for the sake of play has some part in that. 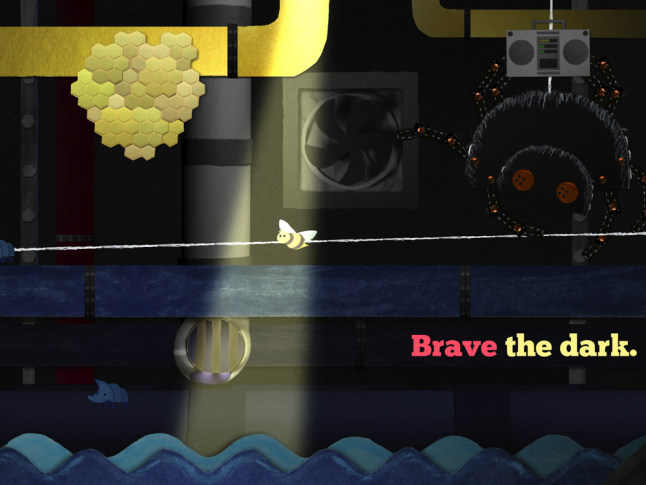 The Spider was always my favorite

Following these rules helped us keep Ephemerid focused as a game, sometimes painfully so. Creating the music first and designing around it was an extremely inefficient way to work. Even more critically, there are large, fully built, parts of the game that we had to cut when they did not meet our standards. The music and gameplay were so intertwined that, if a song didn't work, the level had to be tossed with it. Conversely, perfectly good songs were lost because we couldn't make the gameplay either intuitive or engaging enough. Each of these cuts hurt, but the things we conjured to replace these cuts are some of the strongest pieces in the game.

Amongst the levels cut out, was the original idea for the game; Pressing your finger down and having a creature land on it. That idea, vital to the creation of "Ambiguous Creature Project," had no place in Ephemerid. We didn't need it, not once we dedicated ourselves to chasing down the feeling that that first prototype gave us and expanding on it. That is the process that Matt and I want to keep for our future games. Find a feeling, deconstruct it, and create a set of guidelines for ourselves that drives us to create something that shares that feeling with the world. 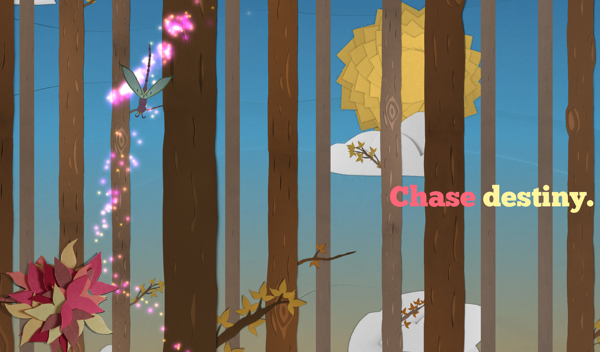