The Shadow of the Colossus soundtrack. Nothing short of a thesis would appropriately cover this subject, so crucial to this work is the musical element and its rarely equaled depth.
Frederic Fourcade
Blogger
April 14, 2014

This is the fifth part of my series of articles about Shadow of the Colossus. Here are the previous ones:
- Introduction
- Gameplay and story
- Designing Agro
- Visual Design 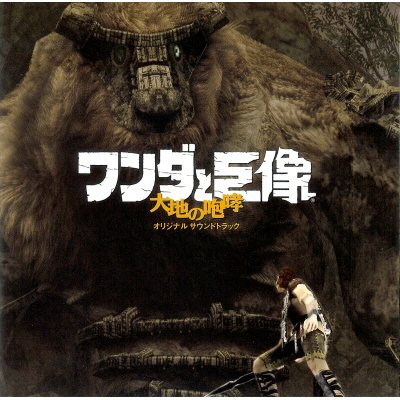 Ah ... the Shadow of the Colossus soundtrack. Nothing short of a thesis would appropriately cover this subject, so crucial to this work is the musical element and its rarely equaled depth. I'm no expert in music theory, so I will spare you the "scientific" analysis of these pieces. I'm just going to mention a few ones, and demonstrate their contribution to the work (or, may I say, the masterpiece) as a whole. Surely there are much more detailed articles about it to be found on the Internet (any link is welcome).

We have already discussed in a previous part the importance of music (and the lack thereof) in the pace of the game. It is found in three different situations: during cutscenes, when approaching a colossus, and when fighting him. We can add the lack of music during the phases of exploration / research. As we will talk about the music played during scenes of fight a little later, I'd like to begin with the narrative role of music during these few cut-scenes of the game. 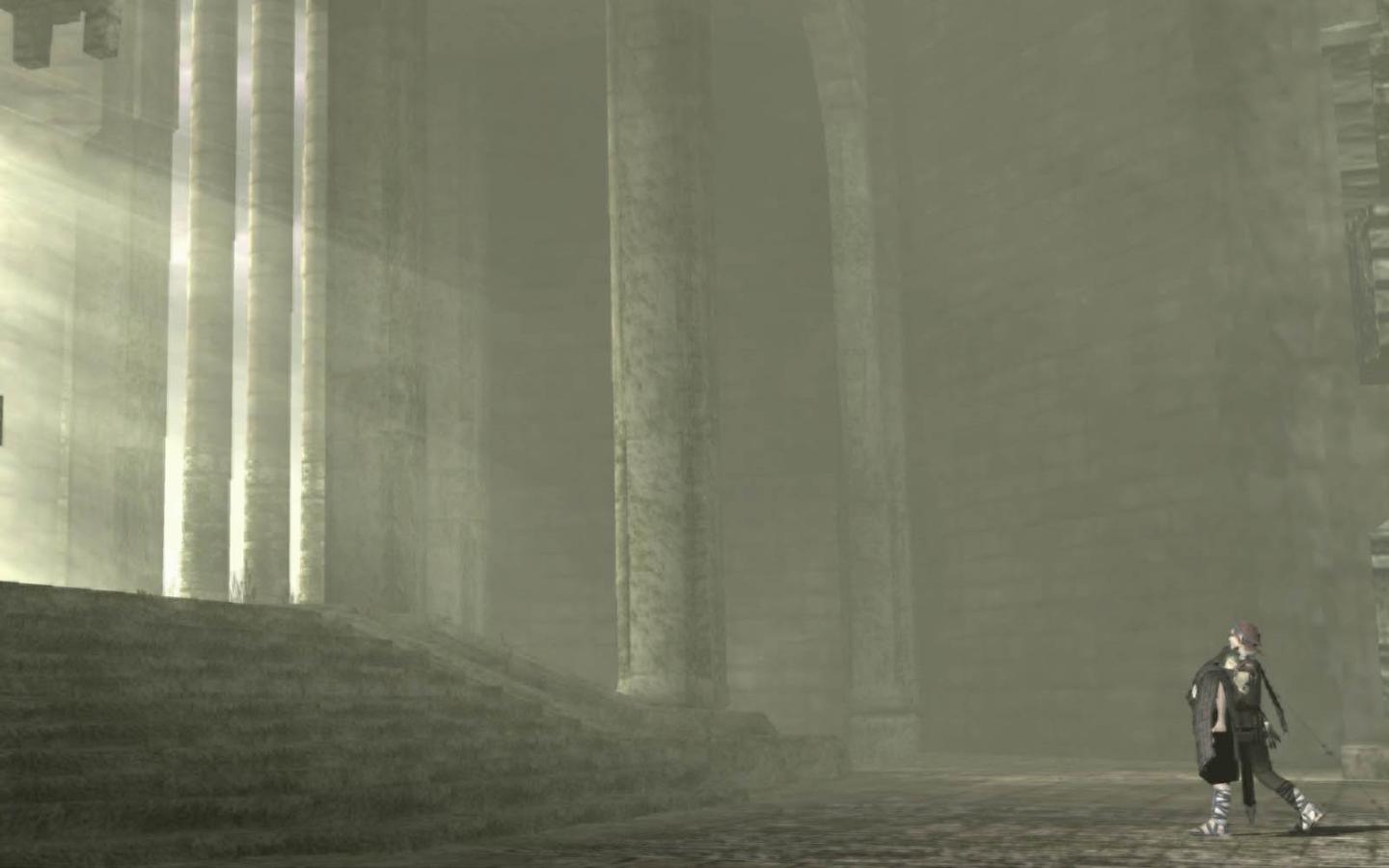 Indeed, music is granted a much bigger role than just an accompaniment. It aims to address the lack of explicit narration, no voice, no introduction text, (almost) no word from the hero, nothing tells us who he is, where he comes from, who is the girl he carries, how she died, etc. ... The music guides the player and helps him imagine how the main protagonist feels, what he went through, and what he hopes for. From this point of view, the compositions of Kow Otani are amazingly powerful; they combine with the visual design of the game, with the framing and with the editing of the cut-scenes, and we realize that the risk taken by Fumito Ueda in his narration presents us with a striking result. Moreover, we notice, when comparing it with Ico, that Ueda has chosen to tell a much larger story than the one presented to us, where Ico would simply tell the story of the liberation of Yorda by the "horned hero". Music in Ico had no other role than sound design, adding to the overall atmosphere of the game, in the same way as the graphics rendering. This is a common point between the visual and musical elements of Shadow of the Colossus to show a world and a character in a much broader temporality than just the present time.

Between hopes and regrets 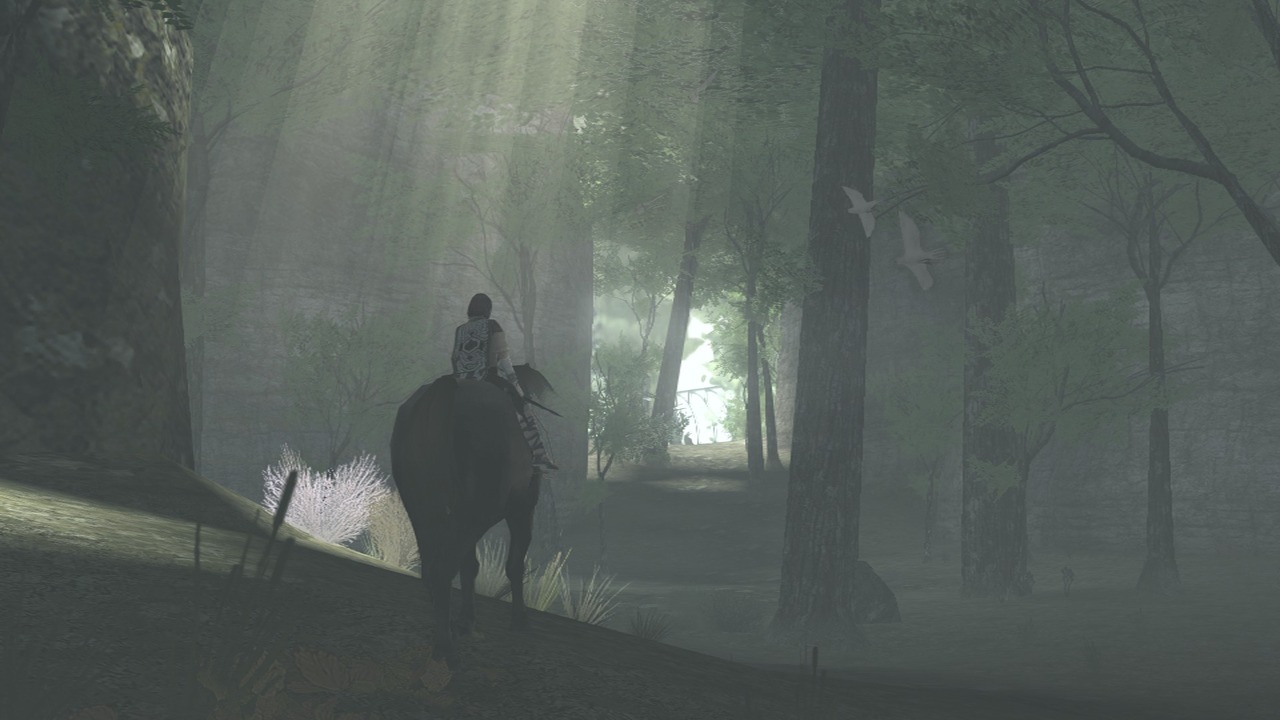 A recurrent feature in the game’s soundtrack is the alternation of hope and regret pervading the work of Kow Otani. We find these two feelings, similar yet contradictory, coexisting in most pieces. The prologue (called "to the ancient land" as a journey in time), played right at the beginning, gives the game the color of sadness, but evolves through its variations toward the evocation of an ongoing journey and the discovery of a new place. Sadness has dissolved, giving way to the unknown, through an indeterminate tone, without actually ending, like the start of a musical response. The startup screen then appears, leaving the player eager to discover this mysterious place. The melancholic tone of this introduction actually evokes past times and times to come.

Other tracks illustrating the rare in-game cinematics also fulfill the role of narrative. The song "Prayer" suggests a certain sadness, while putting the player in a state of serenity, hinting to the possibility of a positive outcome for this bloody quest (5 colossi have been, at that time, slaughtered). Here the feelings of regret and hope are completely mixed in the tone of the song, and not in his various movements (as this was the case for the previous one). In the same vein, the song "Memories" (which was not included in the game) creates an atmosphere of nostalgia without being filled with regrets.

The song played during the epilogue ("Epilogue ~ Those who remain ~") is absolutely beautiful in its construction. It starts on a slower and slower pace, with short and long pauses, reminiscent of the last moments of an agonizing living being. The choirs and organs suggest a mass given in honor of the deceased, bells and flute sound like cries for help or sounds of weeping, minor tones of violins soar, fly and suddenly stop like the last gasping breath. 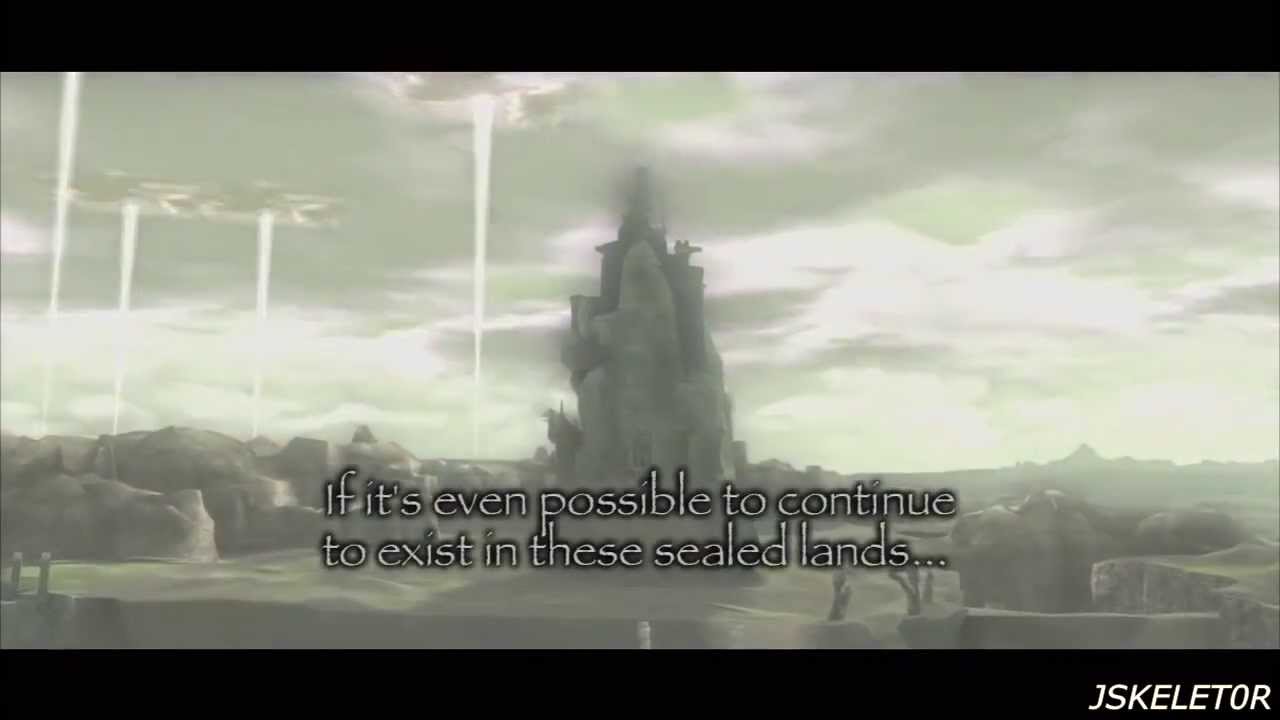 Then, the music resumes, disquieting at first (very slow percussions, and very low violins sounding like a warning), then accelerates, without pauses, violins rise in the trebles, suddenly playing in a much more encouraging tone, with the climax being the triumphant entry of the brass. Then the music goes quiet again, indicating a situation with an uncertain outcome. Finally, some instruments are heard again, some others for the first time, as a renewal of life, and again the calm, as a life resuming its slow and calm course. This musical track delivers a mix between what Fumito Ueda envisioned for this epilogue (where the music magnifies the visuals) and our own interpretation, imbued by this music's non-narrative nature. The concluding piece of the epilogue, titled "Sunlit earth", reminds us of the predominance of the sunlight over this world (see Visual Design), and gives the player a feeling of peace: we eventually escape the worst and life may go on, even though this piece, during the credits sequence, ends on a less optimistic note (serious and sad violins, the thunder rolls).

Kow Otani compositions respond to a constant desire to blur things and blend feelings; nothing is black or white, good or bad, sad or cheerful. Everything is a little bit of everything, whether it is within a single song, or (as we will see below) in the sequencing of pieces.

The other role of music is to accompany the fights against the colossi. Each battle is divided into three parts (music- and gameplay-wise). 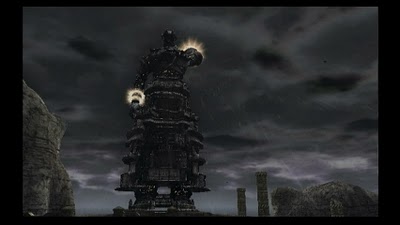 It should be noted however a significant exception: the song heard during the confrontation with the last of the 16 bosses. The music is outright frightening, meshing with the apocalyptic climate (wind, storm, rain) of the scene. The music seems to blend with the sounds of the environment, leaving the player truly alone in this final confrontation, without the support of the music to which he had become accustomed (is it linked to the recent disappearance of his dear Agro?). Here, the dire feeling does not leave the player throughout the fight, he can feel that he is irrevocably heading towards a fatal outcome. The music piece, associated with the scene, is absolutely beautiful, imbued by a great force affecting the player in all his actions.

The music scores accompanying the battles with the giants are no longer about narrative (except for the last one), but rather supportive for the player: They are used in turn to urge caution, to warn of danger, or to push him on and slay the giant once he holds an advantage.

Just a quick note about the composer Kow Otani, because, during my research I was surprised to see how few video games he took part in. While he is primarily a composer for movies and anime, it is fortunate that Fumito Ueda called on him for the composition of the soundtrack. We note that his work on the cutscenes is very close to what is found in movies (i.e. a work on atmosphere in the narrative, or a narrative in its own right). On the other hand, his work on the clashes is actually specific to a video game, in that the music is a support, and is not rooted in the game itself, but speaks directly to the player, similarly to a sport-fan supporting his team. But even in this aspect of his work, very few games received music of such masterful quality. It is surprising that Otani has worked on so few games following this masterpiece. Maybe this is a personal desire, I couldn't find any information about it.

ProgrammingArtConsoleDesign
Get daily news, dev blogs, and stories from Game Developer straight to your inbox
Subscribe