New to GDC? Let's get you caught up

If you're new to Game Developers Conference, no worries! Get caught up on the history of the event before this year's all-digital show.
Bryant Francis
Senior Editor
May 10, 2021

2021 marks the 35th official edition of Game Developers Conference—as the game industry’s premier professional event marks another year orbiting around the sun, we’re more excited than ever to welcome a number of new attendees from all different backgrounds.

Whether you’re just starting your career in game development, or are a far-flung developer joining us for the first time via this year’s all-digital show, we’re more excited than ever to champion game developers and the advancement of their craft.

For those just joining us, we wanted to take some time today to catch you up quickly on the history of GDC to gear you up for this year’s event (running from July 19th – July 23rd). A lot’s happened in the last 30-something years, and we want you to feel in the loop.

You probably noticed a couple months ago that a little “35” popped up on our logo—a marker that this year is the 35th edition of the long-running conference. 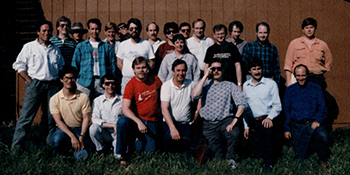 Initially focused on computer games, GDC has grown and diversified along with the game industry to include a variety of platforms including consoles, mobile and handheld devices, tablets, online, and computer games and is expanding into the emerging VR and AR space for games and entertainment.

With developers arriving from all over the globe, it’s no surprise that major industry players like Microsoft, and Nintendo have taken the stage over the years to give speeches, share technical breakdowns, and tell the stories of developing some of the industry’s most groundbreaking games.

In 2000, Microsoft announced the original Xbox at GDC.

In 2005, Nintendo’s Satoru Iwata gave his famous Heart of a Gamer speech that still resonates with developers today.

And in 2010, legendary game designer Will Wright gave a keynote presentation that was kept so secret, he went by a codename in the GDC schedule to keep its contents completely under wraps.

And that’s before you get to the incredible talks given at GDC over the years, like Nintendo’s presentation on the development of The Legend of Zelda: Breath of the Wild, Mariel Cartwright’s must-watch breakdown of 2D animation for the fighting game Skullgirls, or Mark Rosewater’s 20 lessons from 20 years of top-level game design on Magic: The Gathering.

For 2020’s all-digital edition of the Game Developers Conference, we’re bringing the same passion for game development that’s powered the event over the last three decades.

We’ve got a schedule of over 450 sessions, featuring speakers from Sony, Microsoft, Epic Games, Unity, Capcom, and beyond.

We’ll have networking opportunities to connect with your peers in a connected, online world.

And last, but certainly not least, we’ll have the Game Developers Choice Awards, and the Independent Game Festival Awards.

It’s the thirty-fifth edition of GDC, all online, all from the comfort of your home. Don’t miss it! Register by May 26th to earn a free month of access GDC Vault and to get the best price on your pass for this year’s show.

Gamasutra and GDC are sibling organizations under Informa Tech