A Journey from Conception to Live Instrumentation - Guns of Icarus Main Theme 2 Years in the Making
Howard Tsao
Blogger
February 01, 2016 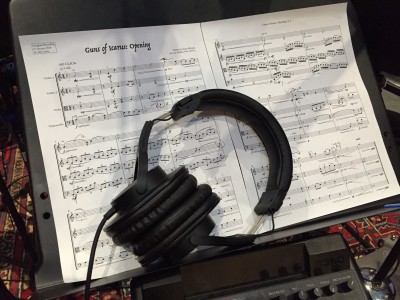 Crafting the main theme music is one vital part of shaping and communicating the vision, worldview, and tone of Guns of Icarus.  When people open the game, especially for the first time, it's the first thing that they are exposed to.  It's that window into the creative soul of the game, connecting people emotionally with the worldview and context we try to shape.

This journey started shortly after the initial release of the game, at the time we launched the Kickstarter for the expansion.  In addition to the frenzy of running the campaign and the incredible support of our players, the one surprising thing that happened during the campaign was composers and artists reaching out to us, looking to collaborate.  One of the composers who reached out was Zain Effendi.  When we looked at his portfolio, we gulped.  A composer who's worked with Hans Zimmer wanting to work with us!?  We didn't think it  would be possible.  But as it turned out, Zain was interested in branching out into games and working with indie developers, so we became one of his indie projects.

In addition to the original battle tracks, we talked about creating a main theme track that would crystalize the mood, feel, and worldview of the game.  Guns of Icarus is set in a world recovering from a long history of war and conflict that pushed the human race to the brink of extinction. Out of the rubble and remnant of human civilization, where past glories were but a distant memory, people rediscovered steam technology.  As people recovered in a fragile existence, they took to the skies once more, both hopeful and bleak.  For the main theme to bring the game to life, it had to capture that dichotomy between desolation and adventurous spirit.  Over many iterations and conversations, we finally arrived at the version our players hear today.  Aside from producing a great piece of music, the process also taught us a lot about translating the language of art into the language of music.

Zain had an incredibly extensive sound library, and that came through in the resulting track. With the melody of the main theme though, we've always envisioned it to be played live, feeling that it would be more beautiful and deeply emotional.  We also felt that as developers we tended towards synthesized music, so we wanted to see if we could deliver a piece of music with classical instrumentation played and recorded live to pay tribute and be faithful to the age of steam.

For one reason or another (ex. Zain's busy schedule, our hecticness in development), the quest to transcribe the piece into sheet music for musicians to play and record live never really got underway until late last year.  The local indie composer Andres Soto composed the faction and overall themes for the PvE expansion Guns of Icarus Alliance.  In conversation, I was reminded of this idea to transcribe the current main theme into sheet music, so I brought it up.  He was really excited and wanted to take it on.

We decided on an arrangement for string quartet as it would be a good fit for the emotional range we wanted to cover and also be dynamic with the interplay between the different string instruments.  We started with a first version in MIDI that featured an intro with cello melody and rest of the strings in tremolo and a faster tempo.  We felt that while the version had a clear voice, it didn't integrate the different instruments as well.  The tempo was a bit too fast for the story we wanted to tell, and the ending felt anticlimactic.  Andres arranged a second version that had a clearer intro and some beautiful harmony with a section that had amazing cello arpeggio, but a weaker middle with some sections that sounded more like Celtic dance.  Andres was able to take our feedback as well as the better elements of both versions to arrange a third version.  This version we loved, as it really related emotionally to the game and struck the right tone. It transitioned from a more stately and adventurous beginning to a more poignant middle, which fit with the dichotomy of our world view well. It reached a crescendo, then tapered to an ending that was hopeful but uncertain.  After 27 email exchanges and 2 calls, we felt that we finally had the version for musicians to perform and record with.  Just in time for the Holidays!  Throughout the process, it was not the easiest working with MIDI files and trying project how live instrumentation would actually sound.  It took a bit of imagining.

After we returned from break, we started planning for the recording session, the most exciting part!  Andres recruited his friend and collaborator Mitch McCarthy,  and Mitch helped us to find the four talented and accomplished musicians - Adrianna Mateo (violin), Kallie Ciechomski (viola), Rebekah Durham (violin), and Eric Allen (cello) - and reserve time at Douglass Recording. 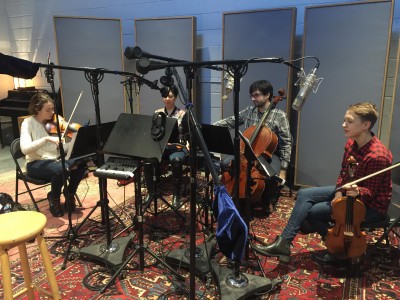 The recording session was notable in terms of how quickly everything came together.  Mitch had amazing ears and had nuanced feedback and interpretation of various notes and bars.  The entire session, from practice to recording different takes, only took a little over 2 hours - a tribute to the prowess of the musicians.  Yet, they studied the piece and played with great emotion.   With some time to spare, Mitch and Andres decided to experiment with an alternate "pizzicato with melody" version, which only took a couple takes and came out amazing. 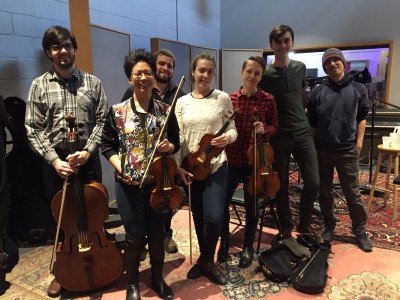 For comparison with the earlier synthesized track, here’s a bit of how the new track with live instruments  sounded during recording:  https://youtu.be/1R7NYZSzqdY