Generating audio for Unity-projects with Chuck and OSC

Short note about generating audio for Unity (Survival Shooter) with Chuck audio-programming language and Open Sound Control (OSC). After all we will get this result:

All sound generates on the fly in Chuck. Wav-files is not used at all. For voice generation I use Perry Cook’s solution which is explained in his Physics-Based Sound Synthesis for Games and Interactive Systems course. For shooting I use simple sawtooth oscillator with falling pitch and a little bit of chorus.

We have 9 sound events in game:

To receive OSC-messages in Chuck you must use OscIn class. Write down the port (oin.port) and address (oin.addAddress). Programm the sound effect that needs to be triggered by this message.

On the Chuck side there are 5 projects:

For testing, you must run all Chuck scripts first. This can be done via init.ck solution which launches all 5 projects at the same time. Then start Unity project. Play the game, OSC-messages will be generated and sent to Chuck. Then Chuck will generate appropriate sound effects.

The whole process can be demonstrated on the scheme: 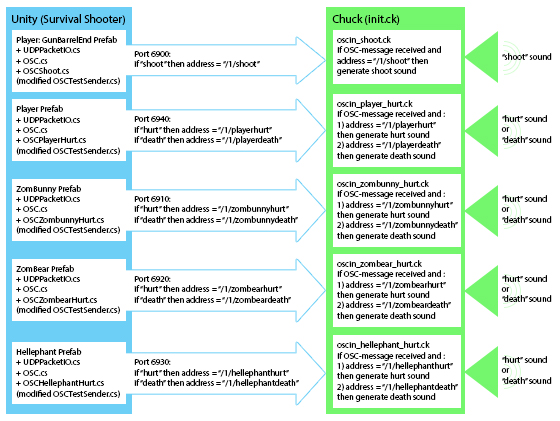 The only issue I don't know how to beat is the spawn of multiple targets of the same type (for example 3 bunnies and 4 bears). The OSC-port is stick to the first enemy of particular type (first bunny and first bear) and will switch to new enemy only after mob will be killed.

Hope you enjoy the result, and if you have some links regarding OSC or sound generation - please share them in comments.