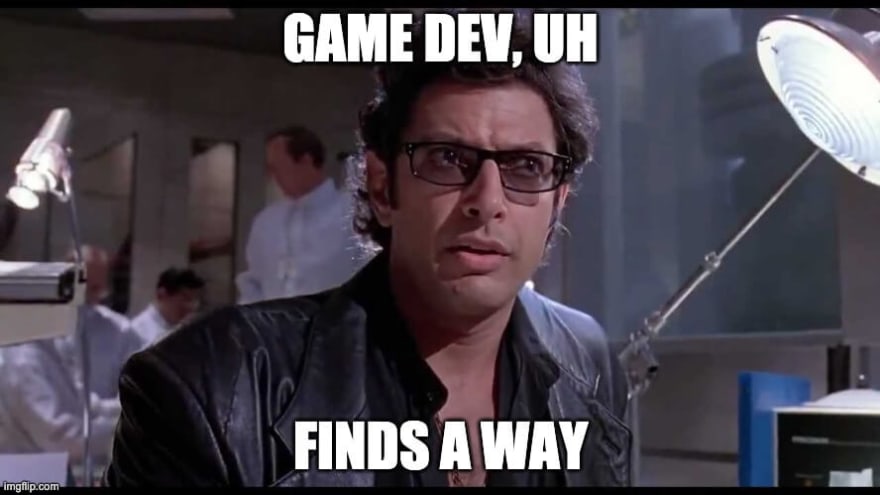 Still stuck at home, but game dev finds a way to keep on keepin' on.

AI and machine learning was a topic this week. If you are building the computer enemies for your game they are worth a read. Debugging, performance, and improving workflows was another common thread, with your usual Shader Graph and effects posts sprinkled in.

All that and more, so get reading!

Using Machine Learning to Create AI Opponents - I’m writing this third case-study on how I utilized machine learning (ML) to create AI opponents for my game. The biggest reason why I went with ML instead of hand-crafting AI players was that I tried the latter and I could not make them fun.
Misdirection Games

Moving the Ground - This is the seventh installment of a tutorial series about controlling the movement of a character. It deals with the challenges of standing on and navigating over terrain that is in motion.
Catlike Coding

Complex Maps - This is the eighth part of a tutorial series about creating a custom scriptable render pipeline. It makes it possible to create complex surfaces by adding support for mask, detail, and normal maps.
Catlike Coding

Type-Agnostic Generic Algorithms - We looked at some generic algorithm examples in the previous article, but they weren’t very generic in one respect: they all required a NativeArray. What if we wanted to make them more generic so they could work on any type of collection? Today’s article shows two ways to do just that!
JacksonDunstan.com

Manually Evoke GUI Events - Ever wondered how to manually invoke a press or unpress event on a GUI element? I sure as hell did ðŸ¤£. After hours of stumbling around and several forum visits I stumbled upon the answer. ExecuteEvents.Execute
Thomas Brown

How to debug Unity with a native debugger using mixed c++ and c# stack - You found a 100% reproducible bug that would make Unity crash all the time. However you are a c# developer and you don’t have the tools to debug native crashes, so what to do? Luckily there are several ways to tackle the problem, as it’s useful to check if something you have done may have caused the problem.
Seba's Lab

What’s Hiding In Your Unity Asset Bundles? - Addressables does it all for you, which makes it easy to trust the system. But, did you know that Unity can silently duplicate your assets into different bundles? This means for you: more RAM, more bugs and more money wasted in CDN. So the question is, do you know what is really hiding in your asset bundles?
The Gamedev Guru

Depth-Based Post Effects - Today we're gonna shift back to post processing effects to learn how to use the depth texture to make a localized toon shading effect!
Team Dogpit

World Bending Effect - In this article, we will recreate the Animal Crossing’s World Bending effect in Unity. Trust me, you will be surprised how simple it is! But we’re not stopping there, we will also explore how we can take it to the next level...
notslot.com

A Shocking Effect - Finally, with a little delay, I will talk about the Matrix-like shockwave effect in the Particle in a Box remake!
Kabuk Games

How To Make A Clock - vWaste no time and learn how to make a clock with this #under60sec tutorial for Unity (is this a dad joke?). We all need them at some point so, here you go :)
Daniel Santalla

2D Outlines in Shader Graph and URP - Outlines are an extremely popular method for making objects stand out in games. Plenty of developers choose to add outlines to advance an aesthetic like a comic book style. In this tutorial, we’ll take a SpriteRenderer and add outlines to it using Shader Graph. As always, the source code for this shader is available on GitHub.
Daniel Ilett

Grass Shader - This tutorial will describe step-by-step how to write a grass shader for Unity. The shader will take an input mesh, and from each vertex on the mesh generate a blade of grass using a geometry shader.
roystan.net

An Animation System Workflow - As part of our Tangle Tower stream for #LudoNarraCon, I did a short look at our animation system, since it’s one of the things I’m most proud of as the game's programmer.
Tom Vian

Photogrammetry Tutorial - Hey everyone! I made a little tutorial to give you an insight into my photogrammetry pipeline for Unity3D.
Jamie Nooten

How to use Quest Link in Unity - A while ago I got an Oculus Quest and began developing in Unity for the headset. Only recently, however, did I get a computer that supported Link. Using Quest Link in Unity’s Play Mode has been a complete game changer.
Game Dev Bill 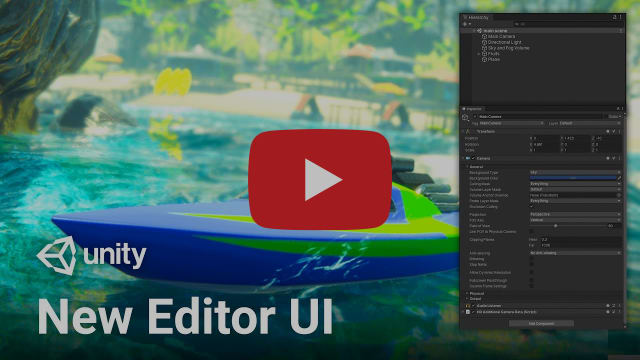 Unity Shadergraph: Rain Drop Ripples! - Surprise surprise, more wet stuff. I just can't help myself. In this tutorial I convert my previous rain ripple video into Unity's ShaderGraph as a lot of people had problems with this, and I sort've promised it could be done. So here it is!
PolyToots

Using cameras in HDRP (Tutorial) - When using HDRP, there is a set of new features to modify the look and feel of the Camera view. In this tutorial, we are going to indicate those specific changes and show how to use them!
Unity

Speeding Up Workflow for Mobile Apps - Unite Now - In this webinar, you'll learn how to dramatically reduce iteration time and boost productivity when developing for mobile.
Unity

Better Artist Workflows in Unity - Unite Now - In this Unite Now session you will learn how to enhance artist workflows for a faster and more efficient production pipeline. We’ll demonstrate powerful artist and designer-friendly features in Unity.
Unity

Building Game Bots in Unity with State Machines (ALL THE DETAILS) - Build bots for your Unity game with a powerful but simple to manage state machine built completely in c#.
Jason Weimann

Creating A Flexible Dialogue System With Unity 2D - Today, I show you how I created the dialogue system for Vibrant Venture from scratch with sprites.
Semag Games

2D Laser Beam Shader Graph & Particles & Controls Unity Tutorial - In this video you will learn how to create 2D Laser Shader Graph and all the related particle systems in addition to coding the laser hits and length by codes.
Binary Lunar

Unity3d WebXR - How To Use WebXR To Build VR Experiences? - Today I reviewed WebXR exporter provided by Mozilla where I show you some of the latest features available in this amazing asset. This video also shows you how components are required to interact with objects in VR.
Dilmer Valecillos

Introduction to VR in Unity - PART 3 : TELEPORTATION - Welcome back to the part 3 of this tutorial serie that will teach you the basics of VR development in Unity. In this episode we will learn how to setup teleportation !
Valem

Unity Audio Tutorials - Compression Formats | Audio Import Settings - What are the differences between audio compression formats and why is this information important for your game? We take a look at the audio compression formats on offer in Unity, what effect they have on file size and performance, and provide lots of listening examples and helpful tips you can use right away.
Double Shot Audio 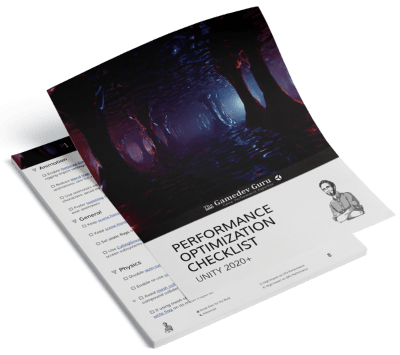 ScreenshotToUnityProfiler - Screenshots in the Unity Profiler!!! [view each frame's screenshot as you select the frame in the profiler.]
Yusuke Kurokawa Open Source

DragAndDropFromField - Drag and drop objects directly from a field! [ever wanted to drag an element from one editor field to another? now you can.]
Andrés Leone Gámez Open Source

Guid Based Reference - A component to give a Globally Unique IDentifier (GUID) to a Game Object. This GUID can then be used to reference an object even if it is another Scene, not loaded yet, or otherwise not easy to directly reference.
Unity Open Source 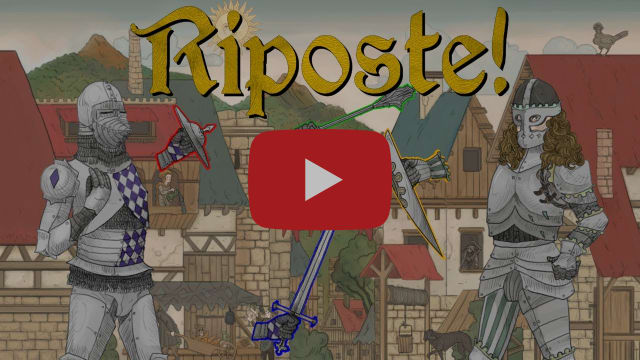 Riposte! - It’s stab or be stabbed in Riposte!, a 4-8 player party fighting game where players control the weapons (not the characters) in dynamic 2v2 duels and crazy minigames.

The core of Riposte! is a novel 2v2 dueling system where players directly control the weapons, with one player on a team controlling the sword and the other in charge of the shield. There are multiple primary and secondary weapons to choose from, each with their own advantages and unique ability.

Riposte! can be played in individual duels, a tournament bracket, or in the party tavern mode where combat is broken up with fun minigames.

[Follow the devlog for more in-depth details on implementation in Unity that you might find useful!]
Misdirection Games