Catching this blog up with my others. Update on the Evans City DVD Soundtrack. Listening to old tapes delivered to the studio.
Richard Reifenstein
Blogger
July 24, 2009

I started back to work on the Evans City DVD soundtrack on Sunday. However the power adapter for the external drive was left at the University so I wasn't able to create new project files in Logic to get a sense of where things are as far as progress goes. I've got to commit to some more time if for no other reason than to get my mind on the right frame of mind. My hiccup in writing this soundtrack will be when we get into the WW2 era. I never wrote big band stuff before. We'll have to wait and see how that all goes! :-)
Posted by Rick at 1:39 PM 0 comments 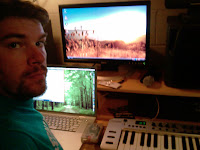 Monday night I sifted through the box of tapes that were found in the old studio in Pennsylvania. Most of the tapes were from mid to later 90's sessions. We were living on Mount Washington in Pittsburgh and I was writing and recording in a small room with glass doors that overlooked the back street and a huge oak tree. It felt like I was in a tree house. I dubbed the studio "Rear View Studio" and wrote two soundtracks for live theater productions while there. I wrote the music for Carlow College's production of "As You Like It" and Pyramid Theater's Production of "El Salvador" performed at the Lester Hamburg Theater. I wrote and recorded solo material that was never released as well. I didn't label all the tapes as well as I do now so I had to listen to them all. Some were labeled very well as you can see in the photo above. As a side note the first song on the track list of the tape in the photo is "Waking of Dragons" which was re-recorded after we moved to Crafton a year or so later and appeared on the "Winter Mix" CD. The later version had strings and flutes from the newly purchased Roland GR-1. However I always thought it didn't have the same magic that the original had with just guitar, multitracked choir (me) and Moog flute. "Angel of the Night" was a track that I had completely forgotten about. I still remember the chord progression and would love to re-record this song. Total ProgRock!!!

I was armed with guitars, an amp, tons of effects and my Moog. All recorded onto a Marantz multitrack recorder. The music was good, the recording OK, but the main problem with them now is I no longer have the multitrack machine. Some of the tapes are two track masters but most are multitrack recordings. So I may have to wait till I get hold of a machine. Listening to those tapes reminded me of how I miss the simpler days of writing on the guitar, recording it then adding synth or what ever else I had laying around. With that in mind I grabbed the guitar I used all the time in the 90's; my Joe Satriani model Ibanez. The first version of the guitar has all black hardware and Fred DiMarzio pickups in BOTH the neck and bridge position. The 12 fret only says "Custom" not Joe Satriani like the new ones do. Maybe Ibanez wasn't sure how they would sell at the time. I had stopped playing this guitar live because it wasn't reliable in the string department. Actually I think I play to hard and that's why I was breaking strings. If I have a whammy bar I'm gonna use it! :-) I didn't realize how much I miss this guitar. I've been playing a Les Paul and a Guild Starfire 5 for the past 6 years so it took some time to get used to the feel. After Tuesday nights session in the studio it feels great!

I got some depressing news from my fellow Architect of the Atmosphere synth twiddler about him losing his job this morning. The economy has finally caught up to CD sales and the company couldn't sustain it any more. They released him. It's like a punch to the stomach. My wife and I have experienced it before. My heart goes out to he and his wife.
Posted by Rick at 9:24 AM 0 comments

Intersting People and The Studio Calls

This business is full in interesting people. With every interesting person you have yet another interesting view on life.
That said; I've been trying to contact Gary Streiner about writing music for the next Living Dead Festival. Last year was a lot of fun and really enjoyed being a part of the festival. This year brought a new website and I'm sure some new and exciting features to the festival. I've sent several email to Gary but have heard nothing back. It seems he wants to go a different direction this year. That's fine, it's the way things go. However an email back stating as much would be better than no response at all.

The family had a great 4th of July weekend. Great food, and a relaxing weekend! The studio calls me from the basement to come and play. The newly installed dehumidifier is doing a great job in making the studio a welcoming place; so I may heed it's call. I am close to having enough music to release at least one CD. I still am working on a companion piece to "Constellations" which a minimalist orchestral piece. I am anxious to get started on some new pieces of music; but must set up a Windows based system to use some of the new virtual instruments I have been collecting lately.

Coffee needs to be consumed I must go! :-)
Get daily news, dev blogs, and stories from Game Developer straight to your inbox
Subscribe