In this post, I highlight 7 music theory lessons from one of the greatest video game music tracks of all time - Final Fantasy VII's main theme - to give you actionable techniques to use in your next composition.
Dan Hulsman
Blogger
December 09, 2015 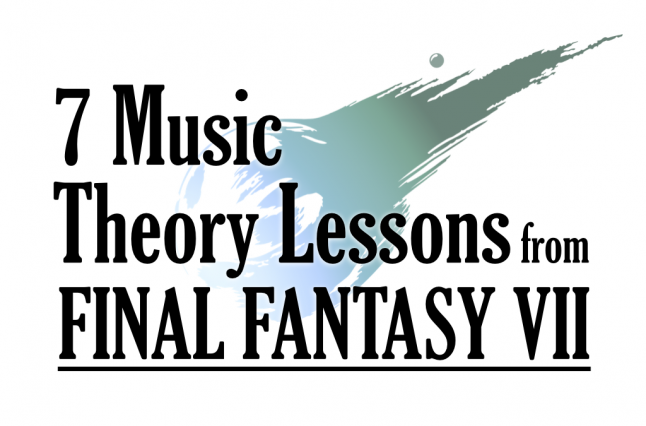 I did a huge analysis of the main theme from Final Fantasy VII, and wanted to share an abbreviated version here with the big takeaways for composers.  For the full analysis, including clips, sheet music excerpts, and examples, click here:

Lesson I: Use of Intervals in Melody Writing. Melody-writing is one of the biggest blindspots for aspiring composers, and it's one of the more emotionally-vulnerable parts of our writing. A few guidelines that Uematsu follows that are universally-accepted best practices are: *Using both stepwise and skipping motion in your melody. Melodies should have a balance between stepwise motion and skips in the melody. Too many skips sounds disjointed, too many steps sounds predictable and boring. Most great melodies establish a balance of the two, slightly favoring stepwise motion. *Choosing a specific interval to highlight can be a great tactic to make a certain piece or section sound special. In the case of FFVII's theme, Uematsu builds the whole piece around a phrase containing a major 7th interval (see what he did there?). That same phrase comes back in several other tracks on the soundtrack, making 7th intervals a staple in the game's identity.

Lesson II: Know the Basics of Keys, Scales, and Which Chords to Use: If you don't know much about music theory, these three closely-related pieces of information will come in handy as they inform you of what notes you should be using to build your melody and, subsequently, your chords. The chords is the big part for me: knowing which chords are available to experiment with while harmonizing a melody.

Lesson III: Cadences. A cadence is the final chords (usually the final 2 chords) of a section or piece. The most commonly-heard cadence is a V-I authentic cadence, because it sounds very final and resolute. Perfect for the end of a piece! However, if you're leading from a section in major to a section in minor, you can use a deceptive cadence (V-vi) to trick the listener into expecting that V-I resolution but instead give them a minor chord at the end. Uematsu does just that when moving from the beginning major, hopeful-sounding section to the ominous, minor section in FFVII's theme. Very easy, very sneaky.

Lesson IV: Ostinatos (or, Ostinati). You're already using them, most likely. They are repeated pieces of material that can anchor a piece of music - especially through harmonic changes/progressions, key changes, etc. It's also a very useful way to supplement the percussion of the piece to maintain a pulse without actually using percussion. This is super-important in chip tune music, as the old NES chips only had 5 sound channels. The composers had to use ostinatos to provide both harmonic and rhythmic reinforcement, as they only had 1 noise channel for actual percussion and 2 channels that were usually used for melody and harmony. After dumping us into a minor key using a deceptive cadence (see Lesson III above), Uematsu uses a low-pitched string/piano ostinato that hammers the minor i chord into our minds while he does some crazy/creepy stuff over top of it throughout that section.

Lesson V: Borrowed Chords. This one is like knowing that you're in the Matrix - you can't unhear this trick once you know what it is. Uematsu is a borrowed chord bandit! Borrowed chords are chords that are found in the key parallel to the key you're writing in. For example, if you're in C major, the parallel key is C minor. Google what chords are available in both keys, and now you have several new chords available to embellish your melodies. Uematsu uses borrowed chords in several of his pieces, but in FFVII's theme he borrows bVI and bVII chords from the parallel minor key to create the following chord progression for the main melody: I - vi - I - bVI7 - bVII7 - I.

Lesson VI: Common-tone modulation. In the original OST version of the track, Uematsu modulates from E major to G major later in the piece, bridging the two keys with a note that is found in both of them: B natural. Going from E major to G major isn't a typical key change, but our ears aren't startled by it because we hear that B natural as an anchor during the change.

Lesson VII: Common-Chord Modulation. Similar to the common-tone modulation, common-chord modulations use a shared chord (called the pivot chord) to move between two keys. For example, the keys of E major and D major both have F# minor and A major chords. Those two chords could be used as pivot chords. Uematsu takes it a step further, however, by using borrowed chords as his pivot chords in the orchestral version of the same modulation referred to in Lesson VI above. Fancy, fancy!

That's it - hope you found something new to throw into your composer's bag-o-tricks! Anyone else have a cool music theory takeaway from video game music that they've applied to their own writing?

Here is the full analysis, including clips and sheet music excerpts.