SEARCH
A minimum of 3 characters are required to be typed in the search bar in order to perform a search.
Art
5 min read
Blogs

Recap/Postmortem of my first time participating in the Ludum Dare Game Jam, collaborating with a team of 4 people to create the game Antidote. I describe the process & decisions made on the art of the game and a timeline of how things were done.
Daniel Nascimento
Blogger
August 31, 2013

This is a cross-post from the Ludum Dare Dev Journal. If you would like to play Antidote click here

This weekend was the Ludum Dare #27 and this was my first time participating on a Game Jam. It was a fantastic experience to me and it kinda happened by luck/chance. It was 1 hour before the theme announcement, and I was reading my twitter feeds when I saw a tweet from @ChevyRay looking for artists to collaborate on Ludum Dare 27. I had heard about it before, of course, but never really thought of joining due to my lack of coding skills. Soon enough we were chatting about it and waiting excitedly for the announcement of the theme.

As I had no previous experience with Jams, we were already talking on how we should do the art for our game. We both decided that low-poly would be the way to go, both to get things done fast and keep a simple, reproducible style going.

Once we got the theme, “10 Seconds” we went into brainstorming mode, throwing a bunch of ideas back and forth.  We had talked before about which games each of us like, and we found common ground on “dungeon looting” games, so we started there. Soon we had the idea of an explorer that got poisoned while exploring, and only had 10 seconds to survive, having to find “antidotes” that would prolong his life. With that idea, I had a Indiana-Jones type character in my mind, and went to Maya to start blocking him out, just 30 minutes into the clock. I decided to get the animations done before sleeping, so I would be able to only worry about props and enemies on day 2. Did some really quick and dirty placeholder animations and crashed in bed (I was pretty sleepy already).

I managed to send Chevy the walk, idle, and hurt animations by 1:52am, and went to bed.

By Sunday almost all set props were done, so we started the day by finishing off some bones, rocks, plants and other dungeon decor that we could use make the floor/set more interesting.

When that was out of the way we figured we would spend the rest of the day doing enemies/enemy variations and whatever else Chevy needed for new ideas (Like that chest we did at 11:14am). Good part of sunday was dedicated to enemies. We choose flying skulls, slimes and plants because those wouldn’t require me to do a proper rig and animation, they were animated on the engine itself by Chevy. Most of the variations are simply different textures with a Lattice deformer applied to the model and some vertex-tweaking. That allowed us to make lots of enemy variation in a small amount of time.

By the end of the day while Eliza was working on the Plant enemies I put together a scene in Maya for the main menu and another for the game over screen. After that I made a variation of that scene with the explorer getting poisoned (we were thinking of having a small 2 scene explanation before the game started, but we ran out of time to add it). Meanwhile Eliza was working on the logo and by 12:49AM we had this: 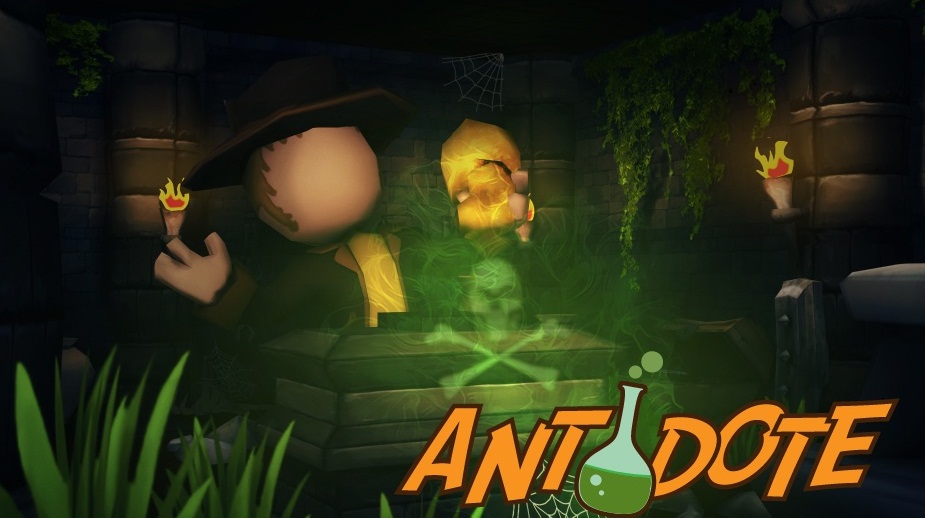 After that we went to sleep.

Monday was the last day for us, we had completed the list of props/assets we had established on Saturday morning, so we weren’t so sure what to do. We then decided to work on some of the enemy ideas we discarded when brainstorming enemies. Those didn’t have time to get coded into the game in the end ;[

At 1:22pm on the last few hours Chevy asked for a few more Scenes, for Credits and for the “Win” situation. At first he suggested I just posed some enemies in funny ways and named each enemy after one of us, but I thought it would be funny if I could get our faces into some explorers.

The Credits Pic ended up not having enough time to be in the game.  (That’s why the credits button is not working when you click on it xD). The “WIN SCENE” was made really quick, when we were running almost out of time.

All in all, by the time we submitted the game was looking quite nice. Despite not having shadows Chevy was able to adjust the lighting to look quite nice, even better than the Color Corrected screenshot I sent him. He also added some fake-sprite-shadows underneath things, that helps sell it. I’m quite proud of the overall look of the game, and what we were able to accomplish in so little time. The feeedback we received so far made me very happy :)

Huge 11mb 4K x 6K image with wireframe/texture of all assets if anyone is interested: I’m really glad for being able to participate in this Ludum Dare, and will definitely try my best to join the next one :D (Hopefully with such an awesome team as I had this time ^^ )