In this sponsored feature, part of Intel's Visual Computing section, Rod Green discusses the creation of art pipelines for the firm's Project Offset engine/game, explaining why studios "should be aiming to sever the umbilical cord" and implement a 'common format' approach to art pipelines.
Rod Green
Blogger
July 23, 2009

[In this sponsored feature, part of Intel's Visual Computing section, Rod Green discusses the creation of art pipelines for the firm's Project Offset engine/game, explaining why studios "should be aiming to sever the umbilical cord" and implement a 'common format' approach to art pipelines.]

It's no secret that the world of art development for games is getting more complicated, with dynamic rig LODs, real-time tessellation, sub-d surfaces, mega-textures, and the like. The complexity of assets is increasing, while at the same time, there's a drive to simplify the process to create them.

If the initial technical hurdle is lowered, artists will be free to be more creative and spend more time iterating art, and less time wrangling their tools to try and just get the assets into the game (or so the thinking goes).

One really good initial step toward helping your artists do what they do best is to alleviate their dependency on one specific software package. Long gone are the days when a studio could get by just with a copy of [insert your favorite package here].

Studios should be aiming to sever the umbilical cord and let their art teams work with what they know or what's best for any given task. Beyond the implicit benefits, there's also a world of good to be had in using this approach when working with outsourced employees.

The trick to making the switch is to change the studio's mentality by breaking down the export barrier and implementing an import-based pipeline.

What's the real difference between export- and import-based pipelines?

An export-based pipeline is typically structured so that assets are exported directly to a custom first-party priority native format. Once exported, the asset is loaded directly into the engine to be binarized. The format is often spec'ed in such a way that the content is written in a very specific structure dictated mainly by the engine's internal data structures. An example would be to de-index vertex data, triangulate, then section out materials, normals, and tangents.

Creating your own custom exporter initially seems like the path of least resistance. Why should we try to interpret or work with someone else's exporter? We can just quickly write our own and make it do exactly what we need!

While this is true and can help jumpstart production, it will ultimately confine and limit your production team.

One of the problems with an export-based pipeline is it becomes challenging to support artists who are working in multiple art packages. A unique exporter has to be built and maintained for each software application.

Some studios avoid this maintenance nightmare by establishing one core package as the gatekeeper of data (see Figure 1), a practice that utilizes a range of third-party established formats to transfer between external packages while ultimately forcing all content to be passed through one primary package's exporter before it can be loaded in the engine.

But what if, during production, a superstar programmer develops tech for the engine that will allow you to render all meshes via subdivision surfaces? The programmer tells you that triangulated meshes aren't optimal for this new tech and the system would really prefer quads. You'll now have to update the engine's native mesh structures to support quads, modify the external exporter(s), and -- you guessed it -- re-export all the mesh assets!

Another more common example is that your project is targeted for multiple hardware platforms. You're going to have to maintain multiple exporters for different targets and at the very least re-export the assets in a way that suits that target platform, most commonly down sampling the assets in the process. Needless to say, in an export-based pipeline, managing two distinct sets of exported assets and art pipelines can get quite complicated (see Figure 2). 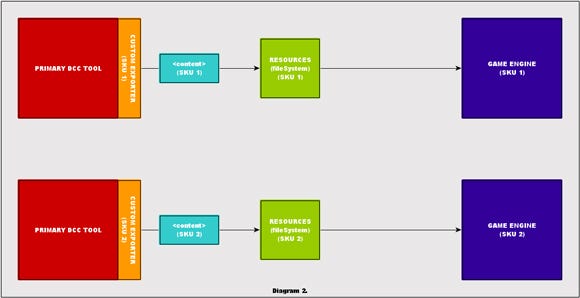 On the other hand, an import-based pipeline shifts the task of native conversion from the export step to the import through a transparent background process. Rather than defining a custom export format, the pipeline makes use of a standardized format (for example, FBX or Collada for models and PSD or TIFF for textures).

The asset is saved to this common format and then sourced in the engine. The act of sourcing the "loading" of the asset in the engine triggers a background process that converts and imports the data from the source asset as needed. It might, for example, convert units, de-index vert data, Y-up to Z-up, combine, flatten, resize, recolor, and so forth.

The real magic of using an import-based pipeline is that the sourced asset is not modified during the process and therefore can be reprocessed multiple times with different settings and through different processes without its quality degrading.

As an example, if you support the PSD texture format in your engine (import pipeline) and convert it to native DDS in the background, but later down the development timeline decide to switch all textures to a JPG-based SVT solution, you would be able to reprocess and compile the source PSDs easily without any loss of quality of the final texture.

However, if you've spent the whole project forcing the production team to convert to DDS, and reference these DDS in engine (export pipeline), then this format change would force you to either:

Simply put, an import-based pipeline allows you to retarget assets without wasting many work months or degrading the quality of the final asset (see Figures 3A and 3B).

Saving conversion settings is also a helpful extension to the pipeline. If you store the parameters used to convert the asset as an associated set of metadata, you can dynamically reprocess source content as needed. This metadata is best saved in a shared database to cut down on the cluttered files and file formats.

The metadata can also be used to tweak incoming assets, for example adjusting the levels of a texture, sharpening texture mips, replacing texture mips, recalculating the tangents of a mesh, specifying automatic mesh LOD reduction percentages, and so forth (see Figure 3C).

As a byproduct of not defining your own custom format, the pipeline's ability to support multiple packages becomes trivial as long as you picked a format that's open and supported across these packages, the prime examples being FBX and Collada. It's also helpful that these formats and plug-ins are externally maintained so all version updates are the responsibility of other and much larger teams.

The format you chose is pretty important. I know of a studio that based its pipeline on binary Max files, which seemed like it would achieve the ultimate goal of "import and convert."

However, there was one key problem. Max files require the 3ds Max client to load. You cannot open these files without spawning a ghost version of 3ds Max in memory and using 3ds Max-compiled plug-ins to query the data. In other words, they're back to exporting! This is the very definition of a closed format (see Figure 4).

Bringing the Process In House

It's important that you take the time to research and evaluate all the different formats that are available. I recommend looking for formats that:

One question people may have is, "If we implement an import-based pipeline, doesn't that mean the team will have to convert assets every time it's loaded?"

Yes. However, the amount of conversion can be reduced significantly to only converting new and modified assets—not all assets—using a simple caching system. When an asset is loaded and ready to be processed, the binary results are stored in a local cache directory.

If the asset has already been processed and nothing has changed, then the engine will directly load from the cache rather than reprocessing the asset again (see Figure 5). This helps alleviate consistently slow load times. Furthermore, the more componentized your assets are, the less of an impact an updated asset will cost to reprocess.

Consider an animator's workflow. A minor tweak is made to the main character's idle animation. The assets are in a non-componentized format (all animations stored in one asset source), and so any change to any animation will force a complete reprocessing of all the animations for that character and not just the new idle clip.

Two other major features are required to truly take advantage of the cache system. The first is distribution, a pretty simple feature, but an important one. A clean way to use it is to distribute cache via your build-release process (using a build installer, synced from version control or synced from a share). With the cache now shared among the team members, they are able to take full advantage of speed loading the native binary data.

The second major feature that's required is "invalidation," which allows the system to force a flush of existing cached assets. Incorporating a cache version to the cached assets can prevent the engine from sourcing any data that doesn't meet the minimum version requirements. With this simple cache versioning, you can quickly update the build to invalidate any data that might cause instability for the team.

Once a solid caching system is set up, you'll get the advantage of loading native binary assets—speed and robustness—without the limitations of being tied directly to the binary format!

In general, the goal is to shift the technical burden from the artists and designers over to the more capable hands of the tools and pipeline engineers. I've noticed in my career that some programmers tend to see assets as very explicit sets of source data that should be categorized, formatted, stored, and so on before they want to h