Blizzard is launching what it calls the Overwatch Workshop, a way to make custom game modes for Overwatch by messing with some of the scripting tools the dev team uses to create the game itself.
Alissa McAloon
Editor-in-Chief
April 24, 2019

Blizzard is launching what it calls the Overwatch Workshop, a way to make custom game modes for Overwatch by using scripting tools to mess around with game logic. It's a system lightly based on the scripting tools Blizzard uses to make the game, with a custom interface and additional systems layered on top.

Game director Jeff Kaplan notes that the tool takes some programming or game scripting know-how to use, making it a tool that game developers will no doubt be able to toy around with to create their own interesting game modes and characters inside Overwatch.

The feature is live on the PTR right now for the PC version of the game, but will eventually roll out to the full version of the game both on PC and console. Debugging tools, as well as a way for players to easily share the custom modes they make, are included in the Workshop as well.

Kaplan notes that the tool offers Overwatch players a way to create game modes like a floor-is-lava-esque "molten floor" map, or use the tool to prototype their own Overwatch characters and abilities. While the tool does require some prior scripting knowledge to get the hang of, Kaplan also says that he’s hopeful it will help introduce Overwatch players to game development as well.

The full announcement is in the video above, but devs curious about the nitty-gritty details of the new tool will want to check out the explainer on how to use the Overwatch Workshop up on the game’s website. 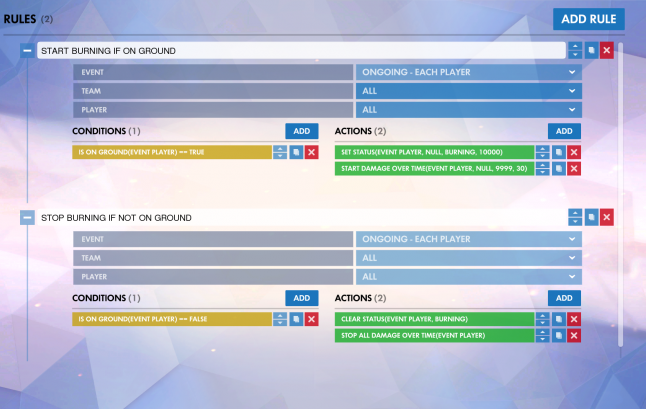