SEARCH
A minimum of 3 characters are required to be typed in the search bar in order to perform a search.
Production
5 min read
Blogs

The effect of proper pre-production

How much impact does it have on the outcome of the quality on a game when the developers take the time to carry out a proper pre-production phase?
Dennis Verschuur
Blogger
June 21, 2017

The game industry is still relatively young, compared with other industries, but it is growing fast. In 2012, the game industry had a revenue of $66 billion dollars (Gresser, 2013) and in 2016 it made $91 billion dollars (Takahashi, 2016). Which means that developers must adapt constantly by learning new development methods and technologies. There is step by step plan in creating a successful game, but it all starts with the pre-production phase. How much impact does it have on the outcome of the quality on a game when the developers take the time to carry out a proper pre-production phase? What is pre-production and what do I mean with proper? In the pre-production phase, the developers must think about their concept, make documents based on their concept, write down the story in detail, do research on their core mechanics, think about the aesthetics of their game and more. This phase of the production cycle in the game industry is the foundation of every game, but it is often underestimated, overlooked or rushed. What I mean with proper, is that the developers must invest time carrying out this phase. Making prototypes of their concept and testing them is crucial for the quality of the game. It is very time consuming to find things that do not work together in the production phase, which follows the pre-production phase. Peter Howell, co-designer and lead events scripter on the game ‘Amnesia: A Machine for Pigs’ stated the following in his postmortem:


“…it is likely that having a full grey-boxed version of the game early on in development would have made later decisions much simpler and quicker to make… Critically, this complete version of the full game would have allowed much easier mapping of key events, such as enemy encounters, rather than attempting to implement such events while levels were in the process of being fully built, or worse, after they had been built” (Howell, 2014).

With this literature review, I want to gain an even better understanding of the effect of having a proper pre-production phase.

I mentioned above some of the steps that developers can take in the pre-production phase but it differs depending on the type of game that is going to be made and who the target audience is. It is impossible for developers to do everything right in the pre-production phase. Certain parts of the game will change during the production phase because developers will iterate a lot on their work. What it comes down to is: the less changes and decisions that a game company must make during the production phase, the faster and more fluent it will go. Besides that, it is dangerous to change directions during the production phase, since the chances are high that it will interfere the coherence of the game (Adam, 2014). The reason why it is so dangerous is because game development is highly complex. A lot of parts of a game are overlapping with others and most of the time multiple people are working on different parts. Furthermore, there are also a lot of dependencies when making a game. Hence, it is so important for developers to spend time on proper pre-production. Developers should test the ideas and prototypes that they have before actually making it.

There are some methods that developers can keep in mind during the pre-production. The constraint triangle (Tomtsongas, 2011) will keep some important key attributes in mind: time, costs/resources and scope. Time refers to the amount of time that the developers have for this project.  Costs/resources refers to the amount of money or to the number of developers that are available to the studio. Scope refers to the estimated amount of time it would take for the developers to create this product. With these three attributes, a triangle can be formed. The triangle itself stands for the quality of the project. “The triple constraint represents key elements of a project that, when balanced well, lead to success.” (Heughey, 2011).

Sharing a cohesive vision with the team is 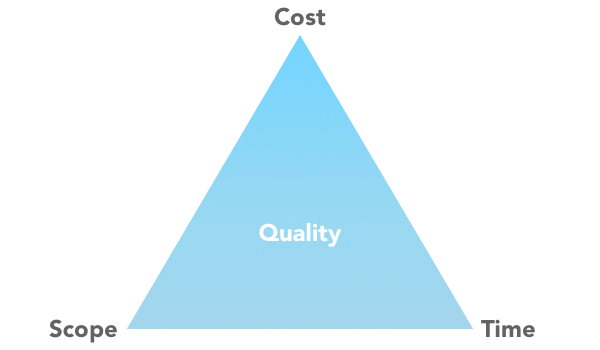 extremely important. It is not easy to achieve this shared vision. It is very difficult to set up a team that exactly knows what needs to be done, when it needs to be done and why it needs to be done. What happens a lot is that developers do communicate and understand each other, but when they do not share a cohesive vision they will interpret it differently (Shih, 2014). That is also why the pre-production phase is so vitally important (Goodfellow, 2010). During this phase, the developers can talk, discuss, share, iterate, etcetera on different ideas. If a team comes at a point where their vision does not align with each other’s vision, it will be very time consuming to fix this during the production phase. During the pre-production, nothing is locked yet. This means that the development team can test the different ideas to see what fits best in their game.