Retro Game of the Day! Stormlord 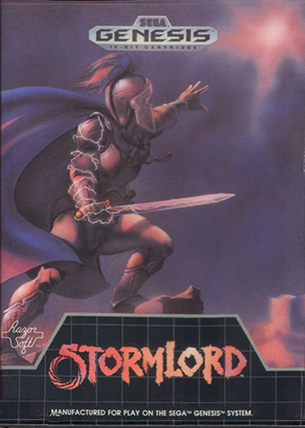 Stormlord by Hewson, released in 1989 for several computer platforms such as the Speccy and Amiga. Published for the Sega Genesis in the States by Razor Soft in 1990.

Once again, it is time to turn the pages back to the early days of the Sega Genesis. Back when Nintendo had a stranglehold on nearly all 3rd-party licensing, the hardware manufacturer had to look elsewhere to bring in new titles for its powerful 16-bit behemoth which weren't developed in-house.

A scant few arrangements were made with some companies, and soon magazines started running advertisements for the "first wave" of Genesis games following the initial all-Sega-produced launch lineup. This was when Stormlord first came into the picture.

Flipping through the back pages of a GamePro magazine, the initial ads for Stormlord looked quite promising. The boxart was impressive and conjured imagery of power and adventure.

The name sounded extremely cool. The screenshots were small and dark, but detailed; the text promised a worthy successor to the style of play recently made famous in the king of the recent launch, Ghouls 'n Ghosts. Stormlord was going to be one to keep an eye on, for sure.

And it did finally arrive, but the hesitant were proven to be justified. This game was nothing like the aforemention Capcom classic, it was a totally different style of play. Hope around, avoid obstacles, rescue fairies.

Not a bad game, but certainly not of the pace, style, or character of it's predecessor. The character lumbered around slowly and weakly, the animations were devoid of spark, and the questing was quite boring compared to what was being put forth in Japanese-styled action games at the time.

This was considered a successful title in its home territory, but the port more players saw wasn't received well at all.

The most notorious thing about Stormlord was that some of the background graphics were considered to be too risque for a general audience (naked fairy statues climbing out of jars). For the conversion, they were given bathing suits; one wonders how many people bought the game for this reason alone!