Retro Game of the Day! Revenge of the Gator 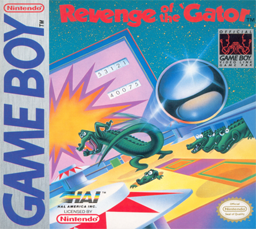 Revenge of the Gator by HAL labs, released in 1989 for the Game Boy.

Yes, yes.. hard to believe that there was a time, some 20 years ago, when the public would still accept black-and-white video games and be excited about it! Well, Gator was certainly a good one to be excited about, if any of them were. 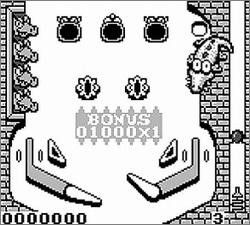 This was an early release for the handheld Game Boy, and probably one of the best video pinballs I'd seen to that point in my life (handheld or otherwise). It didn't do anything particularly fancy, but as the Game Boy was still quite new, having a solid pinball game on-hand to play anywhere was actually a perfect fit.

The game itself was fairly standard. Cutesy graphics, jazzy and catchy music, and a fair amount of "minigame" screens and bonus features to keep busy with. The game isn't really complicated, but it's a great pick-up-and-play, and a very nice presentation that "feels" right.

Even if you're not much for pinball, it can be argued that some games are enjoyable enough that you don't need to be a buff to still get a bit addicted to it, Revenge of the Gator sure fit the bill for me!