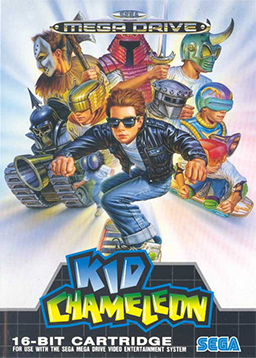 Kid Chameleon by Sega, programmed by the same guy behind Marble Madness (news to me!), released for the 16-Bit genesis in 1992.

An interesting game which still has its fans, KC was a Western-developed platformer released for the system following the impressive success of flagship Japanese-developed title Sonic the Hedgehog.

While KC looked alright in magazine, playing the game in person told a different story. The world were colorful and detailed, with some interesting visual FX - unfortutanately (?) I had been so spoiled by the Sonic Revolution, between the new standards set for graphics and gameplay on Sega Genesis, that this could not have really been anything other than a disappointment.

This isn't to say KC was a bad game; it was fun, and had a lot going for it. They were trying to riff on the Mega Man theme here somewhat (different abilities) morphed with a Mario Butt-stomping world. Sounds good on paper, unfortunately I remember the potential being very squandered with a lot of bland level-design.

Looking back at it now, Kid Chameleon was a game which probably deserved more of my attention (the theme always seemed uninspired to me, the controls were hardly tight, and the worlds were hardly captivating, as compared to that "other" title). I will blame this on the West not being up to task with what the East was putting out in the manner of over-the-top looking and playing platformers those days (let's face it, they really cornered the market on 'em!)

Still, with the different outfits you had a lot of potential for rich gameplay here. Maybe the aesthetic just wasn't nailing it for me (even now, looking at these screenshots). I still suspect there was some hidden substance in this game, which I should have given more of a chance..