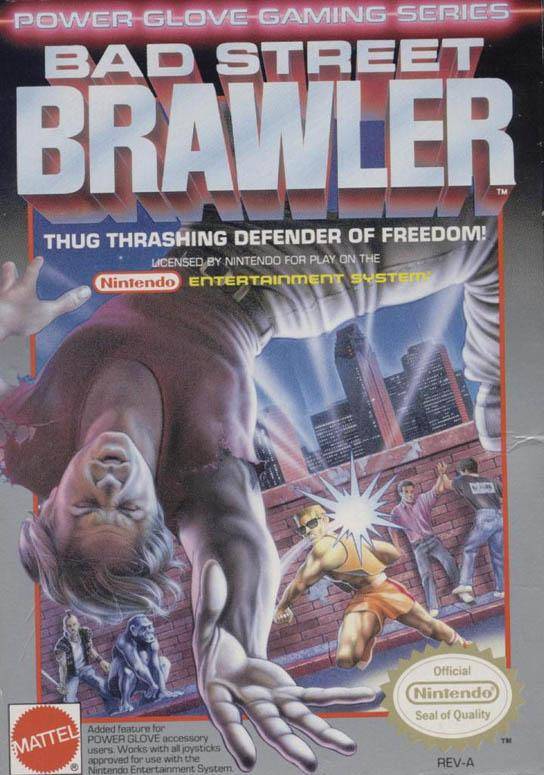 Bad Street Brawler by Beam Software, and published by Mattel for the NES in 1989.

Well.. they got it one-third correct right in the name there, cause this game is "baaaAAAAAd!" Oh, did you see that one coming? A little background - in an early issue of Nintendo Power magazine - which any self-respecting videogame maniac in the late 1980s would routinely have his claws all over - showcased a new control peripheral for the Nintendo 8-Bit system, something called the "Power Glove." What's this? You wear this thing, and can "reach" into the screen to interact with specially-designed games? Okay, I am listening. 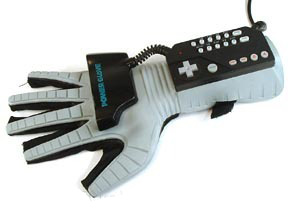 The prototype games shown in the screenshots looked very intriguing - after what seemed like an eternity, following a pretty glitzy little marketing campaign, the Power Glove released and a pair of these "specially designed games" soon followed. I had my doubts about the first game - but as I had the peripheral, now I needed to check out the game made for it, so I decided to give it a rent. Here's what happened. 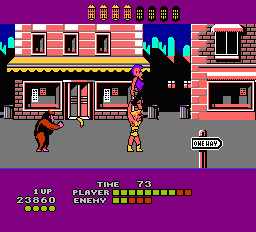 What happened was disappointment. What happened was someone did not care about this crappy game they made. Looking at the box art, it was mean and colorful-looking enough, and games like Double Dragon, Renegade and the like had been available for years now. Surely this wasn't going to require a Herculean Effort to make a decent beat-em-up. But, alas.

It's been some years, therefore my memory is rather faded when it comes to remembering how well tis game performed with the Power Glove. Supposedly it was supposed to be easier to perform the Super Moves or something. The Glove itself, though interesting in design and promise, was somewhat of a failed execution itself - combined with this garbage game, there was not much left to enjoy. Shortly after plugging in and getting frustrated, I removed my Glove and went for the game with a standard NES flat pad. Yes, it was now easier to control, but the game still was not good. 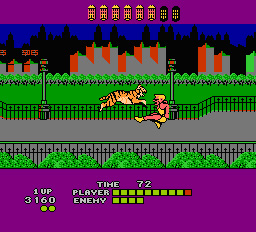 And the game itself? A left-to-right button masher, lacking any credible style or interesting design. The main character was decked out in yellow sort-shorts, and all of the enemies looked like refugees from bad old cartoons. There was a certain sharpness to some of the background graphics, bit there was not enough here to get riled about. Why even discuss this game, then?

Because the Power Glove represented "The Future!" After the initial wave of software, even we happy NES gamers needed something different and innovative to get excited about. 16-Bit gaming was coming, but there needed to be something to jazz us up besides merely the promise of better graphics and sounds. Having an interface that would let you physically manipulate the on-screen action without relying on a "button-pushing metaphor" was too good to be true, apparently. Honestly, it was forgivable - even a dumb could know to expect that the tech couldn't be that spot on. But geez, this didn't even come close to working. And now, 20 years later, we are finally witnessing the Second Coming of motion-control games.