A game dev friend of mine recently hired a translation agency to translate his latest game into Japanese. I skimmed through it to make sure everything was okay... and it turned out to be a sheer disaster.
Kris Graft
Publisher
October 22, 2018

A game developer friend of mine recently hired a translation agency to translate his latest game into Japanese. I offered to skim through it and make sure everything was okay… and it turned out to be a sheer disaster.

So I thought I’d write up a quick article for gamers and game developers who have dreams of releasing stuff in Japan someday.

There’s a common assumption that when you translate something from English into another language, there shouldn’t be any English left when you’re done. Otherwise it would be an incomplete translation, right? And you’d feel like you got cheated out of the money you spent on translation, right?

If you’re translating into Japanese, then that assumption is wrong. English makes up a significant portion of the Japanese language today, and on top of that, English has been a major part of Japanese video games since the very beginning. 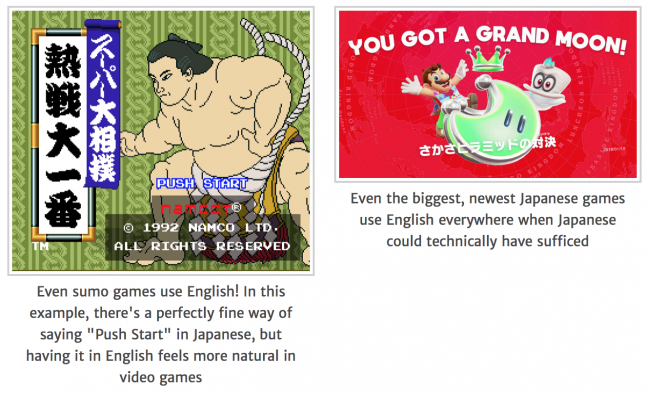 Because of this long-lived connection between video games and English, Japanese gamers expect a certain level of English in their games. So when a game features no English at all, it feels very weird and awkward. This expectation or acceptance of English especially applies to menus, messages to the players, and other user interface text. 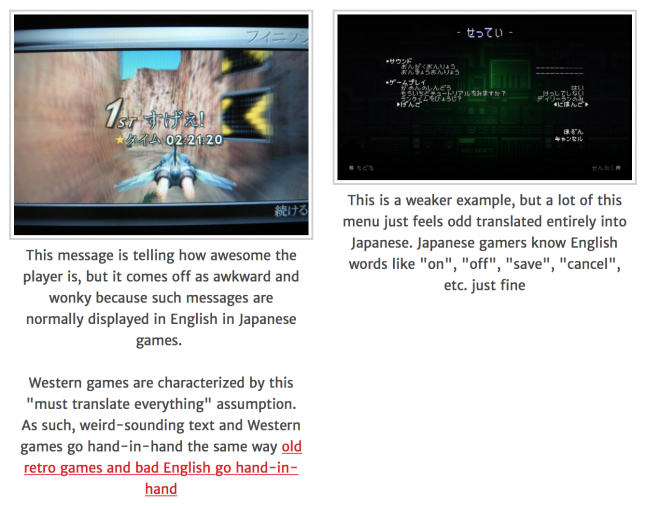 If you’re not familiar with how Japanese works, the two examples above might not seem out of place. But keep in mind that Japanese games regularly look like this:

Lots of English on this selection screen!

Common Problem #2: Translating EVERYTHING to the Extreme

So if you end up turning every special term into fully-translated Japanese, the result is likely to feel cheap and awkward.

Here’s a silly online comment about this phenomenon, in fact: 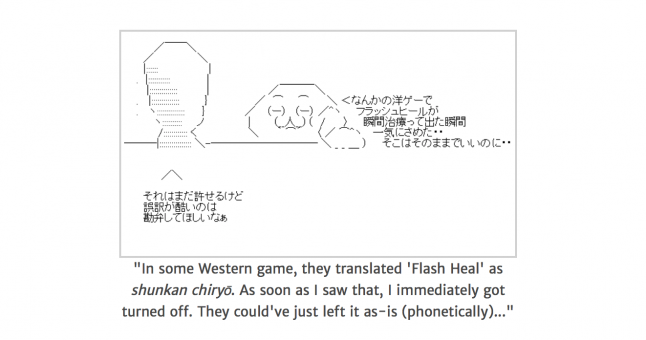 I’m not sure which game it’s talking about, but it’s probably referring to Hearthstone: 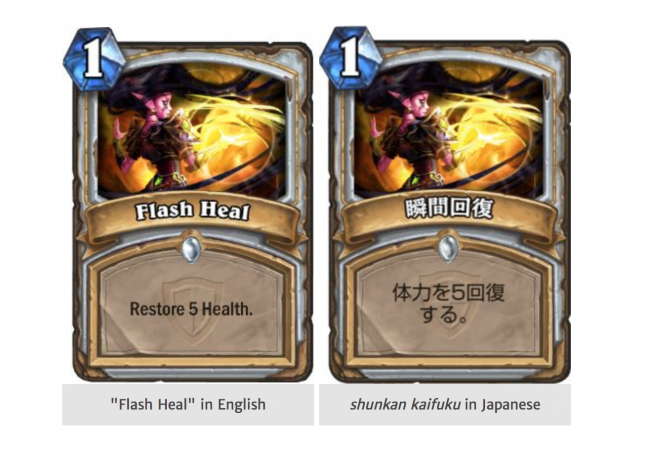 Another example is Earthlock, which is often compared to Final Fantasy IX and is a love letter to the JRPG genre. Unfortunately, the translators never really took this into account, so all of the phonetic English you’d normally see in Japanese Final Fantasy games was fully translated out. Even basic terms like “Cure” and “Regen” get this treatment: 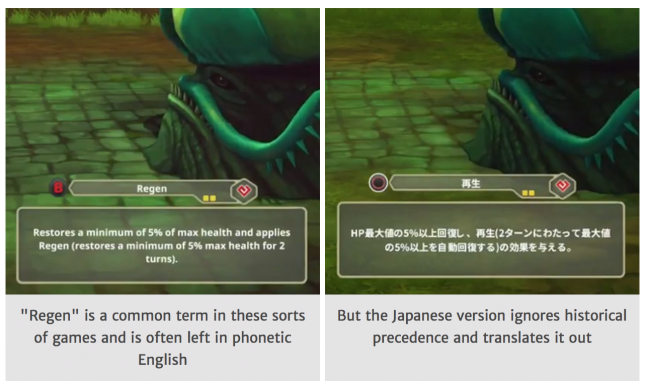 Problem #1 and Problem #2 don’t make or break game translations into Japanese, but they can definitely hurt the overall experience. You can easily avoid them if you and your translator have an open line of communication. These next issues can turn your hard work into a laughingstock, however.

All of these things quickly add up, so if you hire a stranger to translate a giant text file of dialogue into Japanese, the result is probably going to be very bad unless you provide lots of extra notes, screenshots, videos, and back-and-forth communication. Otherwise you get moms talking like demons, tough guys talking like little girls, etc. 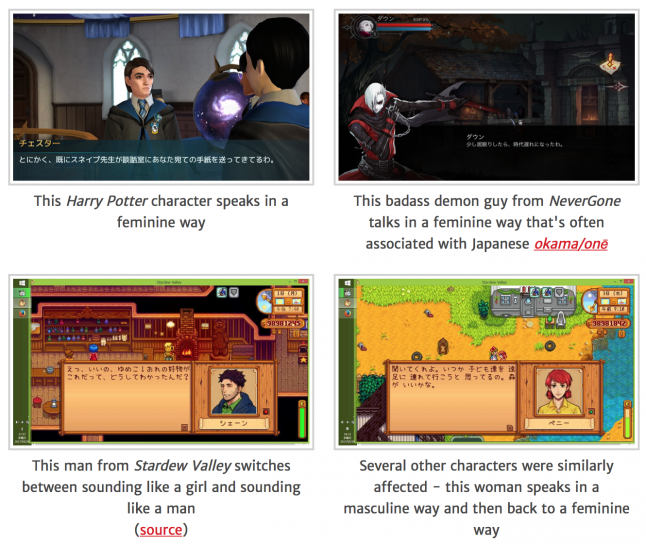 There is a sort of “neutral” Japanese, but it still comes across as polite-yet-sterile.

Imagine you’re a game dev and you’ve just finished a game. You want to release it in Japan to get even more sales, but you don’t know Japanese. So what do you do?

You’d probably try to think of a friend or someone you know who could help, right? And then after that you might look around online for translation companies. Eventually, you get your game script translated and everything seems to be okay.

But if you don’t know the language to begin with, how do you know the translation is accurate? This is precisely how things like “All Your Base” and Vroom in the Night Sky get made! 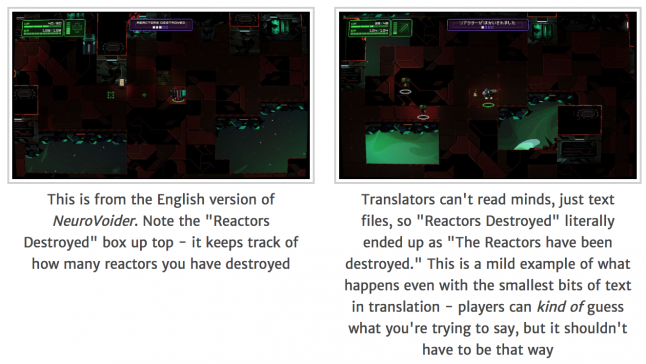 The problem is that game translation is very different from ordinary document translation, so if you simply send off your text to get translated, wait a while, and then get the finished translation sent back to you, you’re probably in trouble. Even more so if you use an all-in-one agency that talks about translating into a hundred languages and handling a wide range of materials.

Also, a good game translator will probably ask lots of questions about context – maybe so many questions that it gets annoying sometimes. If there’s very little communication, then you can expect a lousy translation.

There are lots more problems that can happen in an English-to-Japanese game translation: singular/plural issues, literally translating idioms, genuine translation mistakes, text that gets cut off, etc. The problems listed above are just some of the biggest causes of frustration that I’ve seen among Japanese gaming communities, so I hope that listing them here can help developers avoid translation disasters.

More than anything, though, the quality of the Japanese translation (and any translation) ultimately falls to the developer. If you provide lots of notes about context, lots of info about how different characters should behave, lots of screenshots and videos of key moments, and just be there to answer lots of questions, the translation will end up pretty good. But if you just hand a bunch of text files to a random company that doesn’t specialize in game localization, then you are on the way to destruction and have no chance to survive make your time.

If you liked this brief look at how game translations into Japanese can mess up, you'll like this article about popular and infamous Japanese translations too!