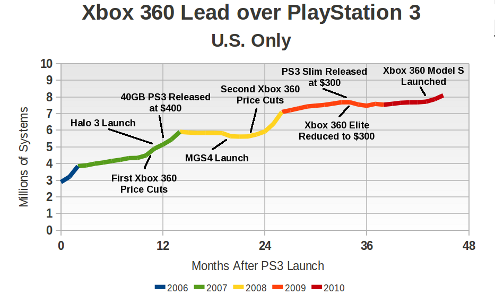 With a second month of strong Xbox 360 sales, we should take some time to examine how this renewed vigor will affect sales of the system through 2011. We can look to the introduction of the PS3 Slim, with its restyled hardware and price, as a model. The figures are startling: from August 2009 through July 2010 Sony sold 4.90 million systems, up from 2.95 million in the prior 12 months, an increase of 66 percent. (Note that the Xbox 360 S model and PS3 Slim comparison isn't perfect, but it is similar enough to justify the exercise. Sony piled features into its hardware earlier and later lowered the price and revamped the system stylings. Microsoft hit the lower prices earlier and subsequently worked to improve the feature set and restyle the hardware.) In the 12 months prior to the introduction of the Xbox 360 S model, Microsoft had sold around 4.86 million systems in the U.S. That's a relatively strong rate historically, since the previous record for Xbox 360 sales in a 12-month period was 5.04 million between October 2008 and September 2009. The Xbox 360 S has already bested that record after only two months, pushing the system's sales for the past 12 months to 5.32 million. (The Wii sold 5.04 million in its first year on the market and peaked at 10.8 million in the April 2008 through March 2009 period.) A mere 33 percent growth rate over the next year would suggest Microsoft could move 6.5 million Xbox 360 systems between June 2010 and May 2011. Given the momentum the system currently has, its improved feature set, software library, and impending launch of a Halo game, that rate is conservative. It seems likely that by the end of this calendar year the American Xbox 360 installed base will have exceeded the lifetime worldwide sales of the original Xbox. While Microsoft has the guaranteed hit of Halo: Reach later this year, its software sales saw a meaningful bump in July. According to a Microsoft press release, software sales for the platform reached $125 million. Wedbush analyst Michael Pachter noted that this was a 16 percent year-over-year increase, and we would further add that Microsoft's one platform claimed 40 percent of all console software dollars for the month. (Sony's PS3 took 29 percent share while the Wii captured 30 percent.) Gamasutra's full in-depth analysis of July's NPD results, with insights and data charts, is now live.
Console
Get daily news, dev blogs, and stories from Game Developer straight to your inbox
Subscribe