SEARCH
A minimum of 3 characters are required to be typed in the search bar in order to perform a search.
Announcements
Event
Free Webinar on 5/24: How Predictive Analytics Drives Mobile Conversions & Boosts Revenue - Register Here!
PreviousNext
PC
3 min read
article

Analysis: The Console Fortunes Of 2009

Gamasutra analyst Matt Matthews looks at 2009's NPD results, reviewing sales of all consoles since 2005 to compare and evaluate momentum. Who needs a price cut n
Matt Matthews
Blogger
January 19, 2010
[Gamasutra analyst Matt Matthews looks at 2009's NPD results, here reviewing sales of all consoles since 2005 for comparison and an evaluation of momentum. Who may need a price cut next?] Sony essentially relaunched its PlayStation 3 platform with the introduction of the PS3 Slim in August 2009. In September we suggested that Sony should be able to sell between 2.0 million and 2.5 million systems in the last quarter of the year, with the system coming in toward the low end of that range. In fact, Sony hit the upper end with sales of 2.39 million systems in all of October, November, and December 2009. It's been a long time coming, but it now appears that Sony actually has a price/value combination that can reach a much wider consumer market. During the same October – December period Sony's prime competitor, Microsoft, sold nearly the same number of Xbox 360 systems (2.38 million). For the sake of comparison, 2.65 million units of Xbox 360 hardware were sold in the final quarter of 2008. The decline in final quarter sales comes in spite of Microsoft's modest shifts in model and price positioning. The Xbox 360 Pro model was eliminated in August and the Elite model was simultaneously reduced in price to $300 while the Arcade remained at $200. Here's a look at sales for each year since 2005 across all models of console hardware: 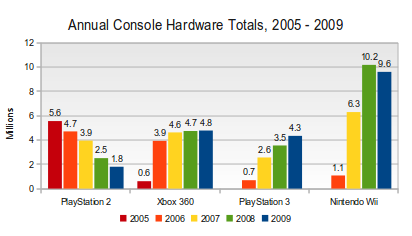 We feel that the pressure is now on Microsoft to avoid losing too much momentum. The last two years have shown that Sony means to be extremely aggressive with cutting its costs and the PlayStation 3 will eventually drop to $250 or lower. Microsoft could conceivably afford a modest price cut of its entry-level Arcade model to $175. Combined with its strong library of software – both old and new – Microsoft could justifiably tout the value of its system over the competition during the period when Sony is unlikely to announce any further price cuts. While the Wii experienced a drop in hardware sales from 2008 to 2009, we are actually optimistic about Wii hardware sales in the coming months. The key here is timing. Recall that as of the end of September 2009, the system's year-to-date (YTD) sales were 22% behind those of the same period in 2008. By year's end the Wii was only behind its 2008 total by 5.7%. The takeaway here is that the right kind of price cuts can shift the playing field dramatically. After its price cut the Wii went from 22% behind to only 5.7%. Sony's Slim moved PS3 hardware sales from a 32% deficit at the end of July to a 22% gain by year's end. In the handheld space, the reverse has been happening. Nintendo introduced the DSi and Sony launched the PSP Go, both priced higher than existing models. At our last reading, we estimated that the Nintendo DSi had achieved life-to-date sales of 2.8 million units and would hit 5.0 million by the end of 2009. Given figures for the final two months of the year, we now expect that the DSi has actually exceeded 5 million. 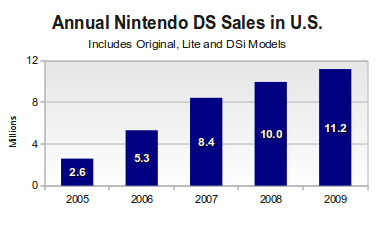 The 11.2 million Nintendo DS systems sold in 2009 and referenced in the above table is a record for any handheld or console. While it is difficult to comprehend a second year of Nintendo DS sales at the 11 million unit level, we hesitate to speculate about the effect that a DSi price cut could have.
Console
Get daily news, dev blogs, and stories from Game Developer straight to your inbox
Subscribe