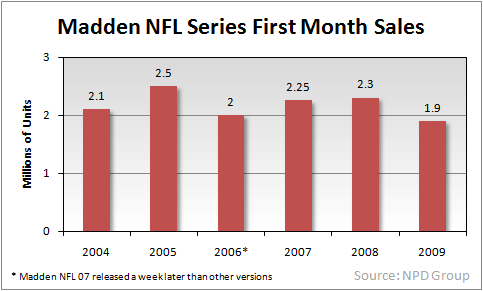 For the platform manufacturers the news was mixed. Unit sales for the Xbox 360 version were down, but Microsoft's first-month share of Madden NFL 10 sales has now exceeded that of its key rival, Sony. While the PS3 posted the only sales growth among the various platforms, sales on its PlayStation 2 collapsed and those owners did not appear to be upgrading en masse to the newer Sony platform. As for Nintendo, Madden enthusiasm appears to have collapsed on its Wii, although history has shown that the Wii version may sell in higher volume through the remainder of the year than will other versions. 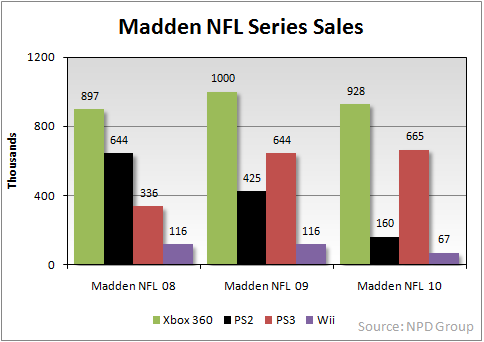 The key question here is whether Madden NFL 10 suffered inordinately weak sales this year compared to its potential in a down industry. While there may be some franchise fatigue – Madden NFL 10 is now over two decades old – the 18 percent drop in first-month sales doesn't seem out of line to us, especially after several months of weaker software unit sales. Moreover, we think it is particularly important that sales of the PlayStation 2 version have collapsed so utterly and yet there has been no corresponding surge on other platforms. That suggests to us the possibility that former PlayStation 2 owners are still waiting for an opportunity to upgrade and are holding off on buying Madden until acquiring that new platform. The price war between the PlayStation 3 and Xbox 360 could have a profound effect on Madden NFL 10 sales through the rest of the year. As late adopters pick up their new system, so too may EA see sales of their football franchise rebound later this year.
Console
Get daily news, dev blogs, and stories from Game Developer straight to your inbox
Subscribe