Road to the IGF: Paper Team's It's Paper Guy!

It's Paper Guy! takes the player to a cute paper world, encouraging them to cut whatever the see as they explore.
Alissa McAloon
Editor-in-Chief
February 27, 2019

It's Paper Guy! takes the player to a cute paper world, encouraging them to cut whatever the see as they explore. As they do, they'll find countless adorable secrets, as well as solve the game's silly cutting puzzles.

Paper Team, creators of the Best Student Game-nominated title, sat down with Gamasutra to talk with us about the challenge of choosing what you could cut in a game of cutting paper, how they worked to reward the player for being curious as they wandered, and what thoughts went into making the game appealing to children and first-time game players.

We are the Paper Team, a group of six game development students. We made It’s Paper Guy! in about three months as the final project for our first year of a master’s degree at the Cnam-Enjmin. The Enjmin is a French public school located in Angoulême at the heart of the MAGELIS Image Campus, a cluster of renowned higher education establishments.

We had all made some small games during game jams or for fun, but It’s Paper Guy! was the first game of this scope we ever worked on. One of our master's degree's particularities is that it gathers people from all kinds of backgrounds, which makes for very interesting group dynamics with many different perspectives on everything. For example, Jeanne (Prigent), our artist, studied game design as well as art before the Enjmin, which helped a lot when discussing design issues. The two game designers studied film, and Jonas (Dutouquet) even worked in film for several years, which shows in the amount of work that went into the cameras of the game. 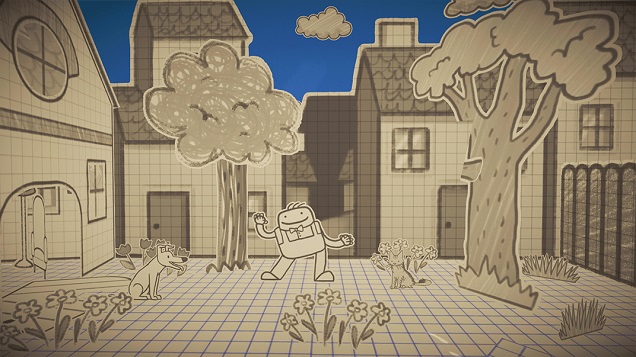 A rendering test into a game

The project started as a simple rendering test made by Thomas (Giro), with the help of his brother Yvan. Thomas wanted to see how scanned paper drawings would look in a game world. It happened to look very promising, so then he wondered what could be done with those paper elements, and that's how the cutting mechanic appeared. He released a very short prototype on itch.io, and many people seemed to have fun with it. A few months later, the Paper Team gathered around our shared interest for the main mechanic, in which we saw a lot of potential to lead to an interesting and unique game.

It’s Paper Guy! was developed in Unity, using Wwise for the sound, and Cinemachine for the cameras. The assets were made with Photoshop, and the animations with TV Paint.

What to cut when your whole world's paper?

We knew from the beginning that we had a game world made of paper, and the main interaction involved cutting the paper elements of this world. One of the first design decisions we had to make was about the limits and constraints of this interaction. What can be cut? Can we cut everything? No matter how fun it is to be able to cut everything, we knew we had to set some rules in order for our game to be a game, and to be able to design an interesting level.

We decided that everything would be cut-able except for the ground, backgrounds, and foregrounds, the « fake-3D » objects (houses, etc.), and the living beings (NPCs, animals, etc.). We knew that many players would try to cut the living beings anyway, so we made a special ‘cut’ animation for each of them, to avoid player frustration. And for the other non-cut-able elements, they have a squared paper overlay to make them look a bit different from the rest of the world.

The other big decision we had to make was for what purpose we would use the cutting mechanic. We could have designed gameplay revolving around puzzles and platforming, à la Paper Mario or Snipper Clips. Or, Paper Guy could have been an explorer cutting his way through a jungle and shaping mountains to climb them.

But we didn’t. We were far more attracted by the poetic charm and humor we could imbue our game with than by the potential challenge of the puzzles we could design with the cutting mechanic. We knew that this decision to make a feel-good game wouldn’t please everybody, but we are proud we managed to stick to it until the end, and that many people enjoyed our game and found it fresh and relaxing. 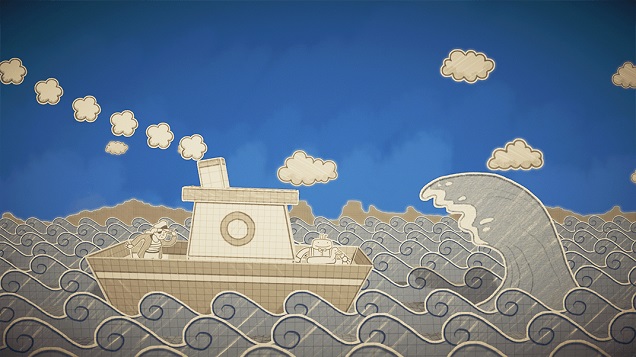 The appeal of cutting

The cutting mechanic gives a lot of power to the player. Even without designed interaction, they can enjoy their impact on the world they are exploring. Every object can be cut, and it gives players the opportunity to have fun, and to make their own story out of the game. They may enjoy thinking that Paper Guy is evil and likes to destroy people's stuff by breaking into their home.

We like to think of Paper Guy as a clumsy character who destroys everything just because the only way he can interact with things is by cutting them. It makes room for fun situations, where the player can feel sorry about what they tried to cut, but also enjoy doing it. Sometimes, a game that offers you a great power without challenging you to use it in any particular way is all you need.

It’s Paper Guy! is a game that relies more on discovery and surprises than on challenge. Therefore, we deemed it important to put many optional interactions in the game to reward the curiosity of players who want to cut things just to see what happens. Some are more rewarding than others, from small bunnies and squirrels in the bushes that you can make go away, to people you can help in the village; but it really helps to keep players curious and engaged in the game.

We tried to strike a balance between the blocking situations forcing players to cut something and the optional interactions, and to give meaning to them both. Sometimes nothing particular happens when you cut a tree, but sometimes a rabbit jumps from behind it and goes back to its burrow, and its mom comes out to thank you. Not every player notices this, but it gives meaning to the actions of the players and it rewards their curiosity.

We also had to take into account the fact that players would interact with our game in various ways: from wanting to cut everything ninja-style, to only cutting when they are required to. This turns into a design problem when our puzzles are solved by cutting. Players might solve situations without even thinking or realizing they did.

It's clearly still a problem we have: cutting things in It's Paper Guy! is satisfying. Cutting things again and again, before they hit the floor, is satisfying. If people are not in the mood for a cute story and just want to destroy stuff, they will miss a lot. But it is actually okay for us if players just want to cut things, if it makes them happy. 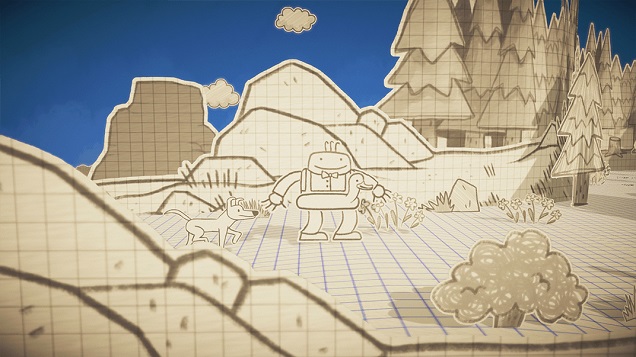 The paper drawing look could feel a bit repetitive, indeed, especially since we decided to keep the paper black and white. The game relies a lot on its animations to keep the player from getting bored. If Paper Guy stops walking, he'll dance.

The world feels very much alive thanks to the many animals and NPCs that players can encounter and interact with. Sometimes, the player is rewarded with a special animation: it's ridiculous how many frames the cat and dog animations have compared to other characters. Some of them should be jealous! But it was part of our intention to keep the animations simple, as it was one of the things that we liked about the prototype. And we tried to keep a cute and minimalist design without being too childish.

Adding a bit of color also helps to keep the visual style fresh. A black and white aesthetic can feel a bit sad, so having the blue sky and sea gives a real visual identity to our game and brings a bit of joy to our paper world.

On designing for children and first-time game players

We designed It's Paper Guy! as a game that would not only be a good game for children, but an ideal "first game experience" as well. We wanted it to be accessible to people who are not used to games, no matter how young or old they may be. That's why we tried to always reward our players for doing good, rather than punishing them for doing bad. Some players do not know what they are supposed to do in a game. Children, especially, come with different expectations than gamers. Even small things like "you have to go right" is not obvious for anyone who is not used to playing games.

Having a non-challenging game, with lots of optional interactions, is great for this. Players will feel like what they're doing is the right thing, and even if they miss some part, they won't necessarily know it or feel bad about it.

Of course, our child-friendly world helps a lot. We do have a lot of cute stuff to interact with! That being said, we have a lot of written dialogue with jokes, and it could be a problem for children who can't read. But, we tried our best to make situations understandable without words. That way, the game is still playable if you don't know how to read (this is also an accessibility feature for grown-up people who don't speak English/French).

The Paper Team would like to thank the Cnam-Enjmin, the Pole Image Magelis, the Cnam Nouvelle-Aquitaine, Le Grand Angoulême, and Women in Games France for helping them go to GDC and IGF to support It’s Paper Guy!.