Untitled Goose Game is a stealth game of causing trouble around a peaceful town as an ill-mannered goose, honking and spreading mayhem wherever you go.
Phill Cameron
Blogger
February 17, 2020

Untitled Goose Game is a stealth game of causing trouble around a peaceful town as an ill-mannered goose, honking and spreading mayhem wherever you go.

Nico Disseldorp of House House sat down with Gamasutra to talk about how the idea of a mean-spirited goose captivated the studio, the accidental genius of their use of music in the game, and the appeal of a more kind-hearted cruelty in games.

I’m Nico Disseldorp, and along with Stuart Gillespie-Cook, Jake Strasser, and Michael McMaster, I’m part of House House, a small videogame company from Melbourne. We made Push Me Pull You and now an Untitled Goose Game. The four of us designed the game together as a group, and I always see that as the main part of what we do, but my individual responsibility was for the game’s programming.

Working with us on the game were Em Halberstadt who did the sound design, Dan Golding who created all the music, including the incredible Debussy performances. Kalonica helped with art and animation, and Cherie Davidson did additional programming.

The four of us were friends before we started making games together. In late 2013, after a year of playing local multiplayer games, we decided to try making a videogame together, and began making our first game, Push Me Pull You. We expected that game to just be a hobby project, but people seemed to really like it, so after a while (and thanks to grant from our state government) it ended up becoming a full commercial release.

Before House House, Jake came from film & television. Stuart and Michael were fine artists. I (Nico) had just started teaching myself programming, and had made some web-based drawing toys and the compass & straight edge puzzle game Let’s Play: Ancient Greek Geometry. 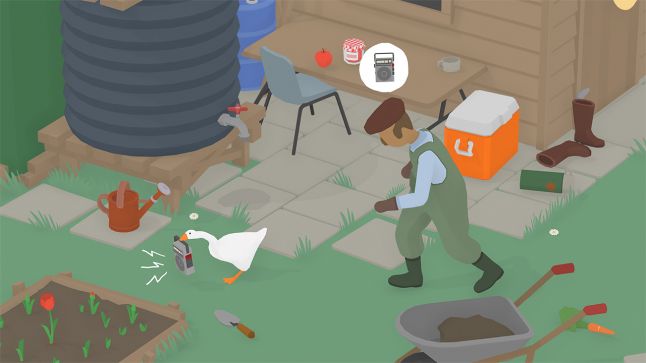 An idea that made them laugh

After finishing our last game, we knew that we wanted to make something where you were a third person character with a very expressive body. We also had some ideas about this character interacting with a range of everyday objects - the kinds of things you might find around your house.

And around the same time, Stuart posted a stock photograph of a goose in our group chat and said “let’s make a game about this”. This got us all excited because geese are very funny animals, even just visually. We didn’t know much about geese ourselves (there aren’t many geese in urban Melbourne), but as we looked into them further, we found out that people who live near geese are deathly afraid of them for some reason. We couldn't really believe it. People regularly have confrontations with scary geese? It seemed so silly.

This made us imagine a game where you played as this goose that everyone is afraid of, going on a big rampage through a small village. The idea made us all laugh, but it took a while for us to come around to the idea that we should actually make it. We thought our real project would have to be something else. The goose idea seemed to have very niche appeal, and like it would take too much work for a small team. But the more we thought about it, the more the concept seemed to make sense. I remember the four of us deciding one afternoon that even if it didn’t work out, it would at least be very fun to work on for a while. So we decided to try to make a goose game.

The game engine is Unity. We used Blender for all the modeling and animation. The sound uses FMOD. We use Git for version control. For production, we just keep a big spreadsheet of jobs that needed doing.

Performing for an audience

The goose’s verbs are the things we thought a goose does: honking, running, moving their neck, flapping their wings. We wanted players to have a lot of different things they could do with their goose body so that controlling the goose felt performative; as though the player was controlling a puppet for an audience, even if that audience was just the player themselves.

To create the core interactions between the goose and the people, we spent a lot of time iterating on how if felt to steal objects from a single character. After experimenting for a while, we realized that it was funnier when the goose tried to steal things when people weren’t looking than it was for the goose to just run up and take things. So, we ended up borrowing a lot of tropes from stealth games, like giving our characters very limited vision, or having very discrete AI states for when characters had noticed something missing or had spotted the goose.

For the puzzles with more one-off conceits, we often drew from a big list of gags that we wrote up early on. The list was mostly a bunch of slapstick cliches, things like “Steal someone’s glasses, they grope around on the ground for them” or “Cause a fight between two people”. Whenever it came time to add more things to the game, we’d go back to the list and see what seemed like it would fit. 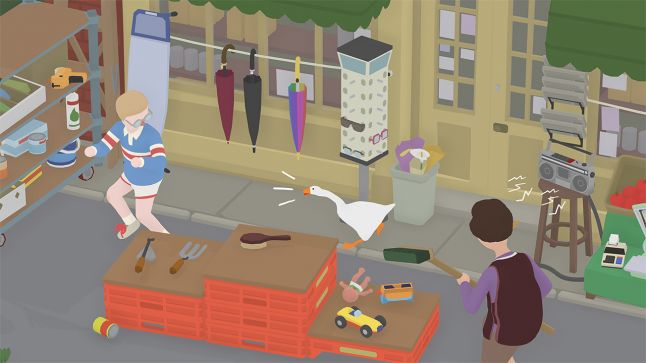 We generally started our planning with an idea for a setting (for example, a pair of back gardens), and a goal for what that area should focus on (playing two different parties off against each other, like in Yojimbo). We would then go through our list of gags and see which ones felt like they could fit our setting and focus, and what kind of characters we would need to support our conceit.

I think the main reason why the levels feel like real places is that Jake, who designs and models all the levels, does huge amounts of research to find real world places that fit our design goals. Once we have a list of the kinds of interactions a level will require, he’ll spend hours trawling through Streetview for real locations that have the features we are looking for. So, any given corner of the game is generally pretty faithfully based on a real life place, and the finished areas are a patchwork of several different real locations all squished together.

On why they felt it resonated with players

I think it’s a lot of different little things working together. The game is very physical to watch and the conflict is always easy to read. Maybe, most importantly, people like that you get to play as a goose. 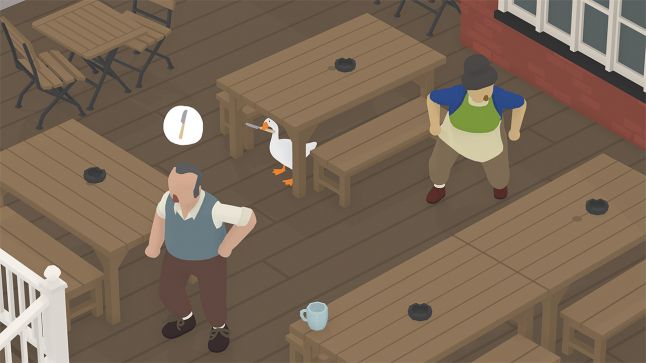 We didn’t originally have any plans to do reactive music. Our eventual music system, which tries to imitate a live piano player, was inspired by people’s reactions to an early trailer.

That trailer was cut quite closely to the music we used, Claude Debussy’s Prélude no. 12, and when we put it online, lots of people commented that they liked the “reactive music”, even though the piece of music wasn’t reactive at all. It’s music that is over a hundred years old and we just let it play normally. But there was something about the music, the way that it stopped and started in interesting ways, that made lots of people who saw the trailer think we were doing something clever.

So, we sat down with Dan Golding, who created all the new versions of Debussy for the game, and together we (perhaps naively) wondered if we could just do what people thought we were doing and have the music play in a stop-starty way, as though a pianist was watching you play and playing along especially for you. It took us a while to get it to work, but we are very pleased with the results.

The final system has lots of room to change suddenly, which makes it feel very responsive. The way the music is played can jump up to a higher intensity or down to a lower intensity or to just pause for a while in silence. But it also feels quite natural and preserves the feeling of Debussy’s original composition. It does feel a lot like someone is watching your game and playing the piano for you.

The appeal of being a jerk goose

This kind of playful cruelty is a very easy motivation for players to tap into. It provides a justification for conflict between the player and other characters that facilitates a pretty wide range of actions. Everything from pulling up a carrot to honking at someone feels like “success” when your goal is just to bother people.

You can see people role play as this kind of chaotic character in lots of games, even when they aren’t supposed to. Like in The Sims when people make their sims go for a swim and then take the ladder away or whatever. It’s often fun to play games in this way and see how far you can push things, but it can feel a bit dissonant because you are supposed to have other motivations. In the goose game, we make it clear that we want you to play that way.

That said, I think a big part of the games appeal is that the goose is never really that bad or that cruel. Lots of popular games with physical conflict have lots of actual violence, which at least for me, makes the cruelty pretty offputting. For example, sometimes I think it might be fun to give a character a little scare in Grand Theft Auto, but whenever I do, the reaction is immediately way too much for me. The character will start screaming or shooting and I just end up feeling bad. As the goose, people are free to cause lots of mischief and get creative with their cruelty, but it feels safe to enjoy because no one gets hurt.