SEARCH
A minimum of 3 characters are required to be typed in the search bar in order to perform a search.
DISCIPLINES
9 MIN READ
Featured Blog

A deep-dive into Cultist Simulator's data from its first year on sale. Sales, units, ratings, features and more! Hope you like numbers.
Lottie Bevan
Blogger
April 02, 2020

Hey everyone! Last year I posted an in-depth data dump about Cultist Simulator mobile’s first two months of life. You can read that in full here.

The key points were:

Today’s the first year anniversary of Cultist Simulator mobile. I’ve found mobile data one of the hardest numbers to find in game dev, so here’s an update after one year of sale.

In one year on sale, we've made €422k net revenue. This is more than double what we made in our first two months, which I'm surprised by. I'd always assumed premium mobile games made all their money at launch, and then trailed off into insignificance over time. Not anymore.

What remains in line with received wisdom about mobile games is the difference between the Google Play and the App Store. Google Play has a reputation for reaching a wider number of players at a lower price point. The App Store's the opposite, with a relatively controlled pool of high-value consumers. TLDR: you'd expect more money from the App Store than Google Play.

In one year, we've made €254k from the App Store versus €168k from Google Play. This fits in with expectations, though it's worth flagging that Google Play is currently banned in China so our Chinese loc only comes into play on the App Store.

Because we chose to partner with Playdigious, we only ('only') take home €211k net revenue overall. But for a two-person team who are busy doing other things - like developing DLC for the PC game, or making a new game altogether, or producing merchandise - it feels as close as you're ever going to get to 'free money'.

I estimated best-case Year 1 sales by assuming 5% of Monument Valley 2’s Y1 sales (~105k units) and comparing that with an extrapolation from the data I had from Sunless Sea (~90k units). This left us with an estimated 100k sales within twelve months.

Cultist Simulator shipped 127k units in Year 1. This isn’t going to make anyone at King proud, but from a PC-only indie’s perspective, I’m very happy indeed. 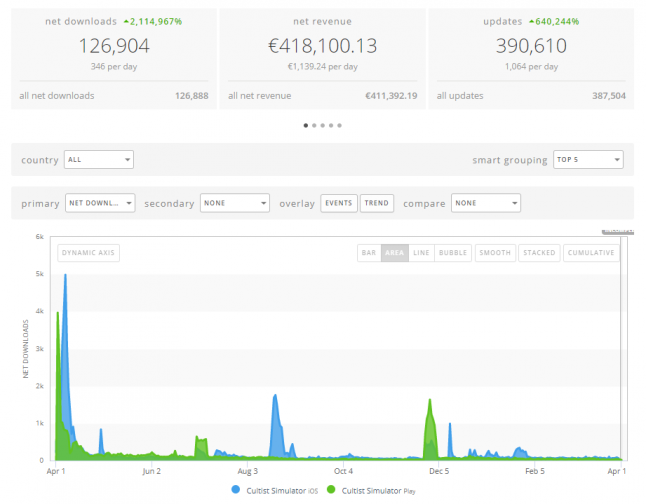 Different countries' performance maps pretty closely to the regional sales we see on PC. The US has always been our biggest market - Americans love a bit of olde-worlde Englysshe charm - but there’s a particular point about China to make.

Here’re our overall top 10 performing countries across the App Store and Google Play in Cultist’s first year of sale.

The US on top, as you’d expect, closely followed by China. The other countries - the UK, Canada, Germany, all of which rank roughly in this order on PC - are but a fraction of the revenue generated from the top two countries.

Compare this to the separate charts from the App Store…

As mentioned above, the Google Play Store is currently banned in China. So all of China’s revenue - enough to make China our second top performing country overall - is produced by the App Store alone. I’d assume that if/when Google Play is allowed again in China, we’d see China become our number one performing country by some margin over the United States.

Cultist is a very divisive game. Our Metacritic score sits at a rather meh 71. We got a 7/10 in Edge. But Alexis’s occult world of lore, Lovecraft and ludicrously excellent storytelling crawls into people’s dreams, so we’re currently at ‘Very Positive’ overall on Steam. Just, though - for every few nice reviews we get, there’s one that really hates it.

Cultist Simulator mobile has sat at 4.8/5★ since launch. It makes a very boring graph (but a very happy dev).

My understanding is that mobile is a harsher market than PC. PC gamers are often involved with the developers behind the game, or at least aware that there are humans somewhere round the back. There’re Discord and Twitter and blogs and updates. On mobile, there really isn’t. There’s far less mobile press, which tells you something. There’re also lower price points, less developer engagement, and more anonymity: games on mobile feel more like products than the soul-children of community-focused indie studios.

We were expecting a bit of a slaughtering, to be honest. But Cultist’s ratings on mobile are actually better than they are on PC! Part of this is that Cultist Simulator was ported at a more polished stage than we launched on PC, so it’s objectively a better game. Part of it is that we were wary of potential bad reviews, so we bent over backwards to advertise that the game didn’t have a tutorial and was meant to be a challenge and wouldn’t hold you by the hand. Part of it is that Playdigious’s whole strategy revolved around keeping our ratings high, which is apparently the best thing you can do for a premium mobile game.

I’ve launched two mobile games prior to Cultist Simulator. First was Fallen London, back in May 2016. The second was Sunless Sea on iPad, in March 2017. You can read a deeper overview of the differences between the three titles here.

The key point is Fallen London and Sunless Sea were back in the halcyon days of iOS 10, when a successful launch meant week-long global featuring across the App Store’s front page. Interestingly, despite them both achieving that week-long global featuring and Cultist Simulator having to settle for a rather disappointing launch feature restricted to the UK and Ireland, Cultist Simulator has had more consistent featuring in the long-term and has been more successful than those two previous games.

Here’re what our Y1 App Store rankings look like for our top-performing countries. I'm sorry for what you’re about to see.

Here’re Google Play’s rankings for the same countries and period.​

Analysing these graphs - particularly the App Store’s - would take a long time. So the key point here is not the detail, but that ratings go up and down over a long period of time: they don’t start high and trend downwards into nothingness like premium mobile games’ graphs did when you started with that huge week-long featuring but didn’t have much else to buck your sales in the long-term.

My key takeaway from this is that premium mobile games really do have long-term revenue prospects. Cultist’s earnings are small change to a successful F2P mobile game, but for small indie teams constantly worrying about the bottom line, it's significant.

If you’re able to port your PC game to mobile - even without revamping its design to retrofit a F2P framework on it - you can theoretically make a significant lump of cash. If you’re small, like we are, this can be the difference between life and death. Many streams feed the mighty river, particularly in these weird and unprecedented times.

Playdigious, being excellent, suggested an unusual strategy for keeping Cultist Simulator successful in the long term. As well as lowering the price point later down the line - though we're not yet at the point of doing that - they experimented with adding PC DLC at interludes as IAPs. The aim was to leverage featuring and to boost revenue, much as PC games use Steam sales to spike up their cashflow in the long-term.

The risk was that it might lower Cultist’s rating overall, which was the single worst thing that could happen bar a technically problematic launch or zero featuring. People are generally suspicious of IAPs in the same way PC players are often suspicious of DLC. A lot of mobile games - particularly F2P ones - are extremely pushy when it comes in in-app purchases, leaving players feeling squeezed.

There’s none of that in Cultist Simulator. You have to tap the button in the main menu that says ‘DLC’ to even know there is any - but we were aware that the good will we’d garnered with a reasonably priced high-quality premium game could be undermined by making players feel like it’s all been a ploy to wheedle more money from them.

Fortunately, it didn’t play out that way. It's too early to tell what extra cashflow these DLC IAPs have given us, but they certainly haven't borked our ratings. Fingers crossed!

Cultist Simulator mobile didn’t make or break Weather Factory. We didn’t rely on it, but we did take a chance: and that chance has paid off to the tune of nearly half a million Euros that we wouldn’t have in our bank account otherwise.

Having our weird indie game on another platform is also invaluable for widening our audience. Most indies' biggest problem is being seen among the throng of other games. Any opportunity to reach new players is worth its weight in gold, at least for a studio that’d set ‘pervasion’ as its year one goal.

We now have 120,000 more people we can theoretically market to with a well-placed main menu button or push notification. We’re currently advertising both our upcoming game BOOK OF HOURS and our mailing list though the mobile game, which results in ~20 sign-ups a day. Again, we wouldn’t even blip on most of these people’s radar without having a mobile port.

We launched two new mobile DLCs today and Cultist Simulator is 50% off on the App Store and the Google Play Store to celebrate turning one. Let me know if you have any more insights into the data above! I bet you do.