Visualizing the state space of puzzles is a new way of working with puzzle design that tells you vital things about the puzzle design at a glance. I created a free tool for doing this and I write about how you can implement it in your own tools too..
Rune Skovbo Johansen
Blogger
April 06, 2016

This post was originally published on the runevision blog.

In the beginning of 2014 I was interested in procedurally generating computer games puzzles with typical elements like toggles, gates that can be triggered to open, boxes or boulders that can be moved onto pressure plates, etc. Many games contain elements like these and I took inspiration in particular from the game Lara Croft and the Guardian of Light.

To better understand these puzzles, and understand what makes a puzzle interesting or boring, I started creating a tool for analyzing and visualizing the state space of the puzzle. In the Procedural Content Generation mailing list I discussed the approach here. I've worked on it on and off since, and while I still don't have an algorithm for procedurally generating the puzzles, the tool itself is interesting in its own right. It's called PuzzleGraph and I've just released it for free. 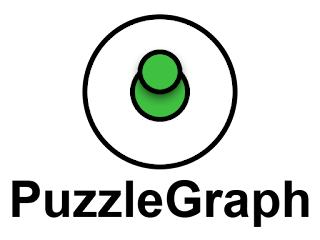 You can setup and connect puzzle elements like gates, toggles, pressure plates and boulders, and see the state space of the puzzle visualized, including solution paths, dead ends and fail states.

If you make some puzzles with PuzzleGraph, I'd love to see them!

The best demonstration is this video I made. If you already saw the video, skip down a bit for some new info and announcements.

When I announced PuzzleGraph on Twitter, a lot of people seemed to be excited. Besides re-tweets, I also saw many people forwarding and CC'ing each other, particularly people in academia.

It makes sense. As a practical tool for everyday work, PuzzleGraph may only be useful to few people since it's tied to specific (although fairly common and generic) puzzle mechanics. However, as a fully implemented proof of concept and as a research project, it's showing an interesting way of thinking about and interacting with puzzle design that seems to capture the imagination of a lot of people.

Analysis and visualization of game state space is also a field already researched in academia from a bit different angles. Research-wise I may not have done anything groundbreaking with PuzzleGraph, but its polished and highly accessible form with no barriers to entry probably makes the idea of working with state space interesting and accessible to a wider audience.

@runevision @jseakle Something like this could be really useful for general UX design (not just games).
— bob (@bobpoekert) March 30, 2016

@runevision nice! If it was a tad more abstract (e.g. like https://t.co/pMCZ8pZdFl) it'd be a really useful tool for puzzle/system design
— hessel (@besttoffer) March 31, 2016

In order to maximize the usefulness that PuzzleGraph and it's approach may provide to others, I've decided to open-source it. This way people can adapt it to include specific mechanics of their choice, or pull out specific parts of it and integrate into other tools, or just have a look at the code structures and algorithms for reference.

If anyone want to make improvements that might be a good fit for the original version of the tool, I'll be happy to discuss including it there as well.

The code repository is located at https://bitbucket.org/runevision/puzzlegraph and is licensed under the Mozilla Public License version 2.0.

Here's a list of all the puzzle elements in PuzzleGraph version 1.1. Some elements are in locations (nodes) while others are in connections (edges). 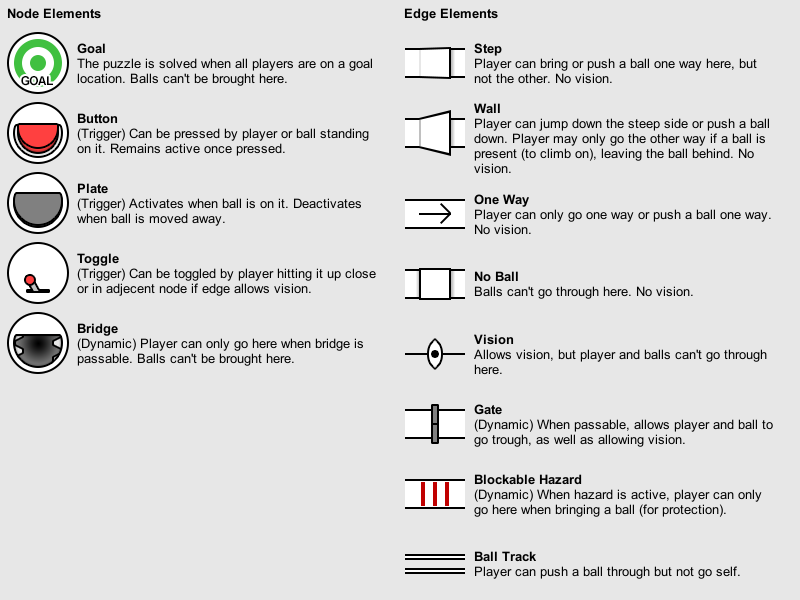 Since the initial version was released and I made the video, I've added a few more features in version 1.1. All the node and edge types now have tooltips to make it more clear what exactly they do and there is a help screen with an overview like the above. I also added three new puzzle elements; the one way edge, the blockable hazard edge, and the ball track edge, as described above.

I'm not yet sure to what extent I'll keep developing PuzzleGraph. I've honestly had very little time to actually use it, and gathering more experience with it through my own usage or other people using it will probably be the focus at first.

So if you use PuzzleGraph - either purposefully or just messing around - please tell me about your experience. And I'd love to see puzzles you make with it, and potentially include them with the distribution if you want.

Apart from that, I guess I'll see if anything comes out of open sourcing it as well.

In the next section I'll go over the techniques used for the state space visualization that you might use if you want to implement it for your own tools. 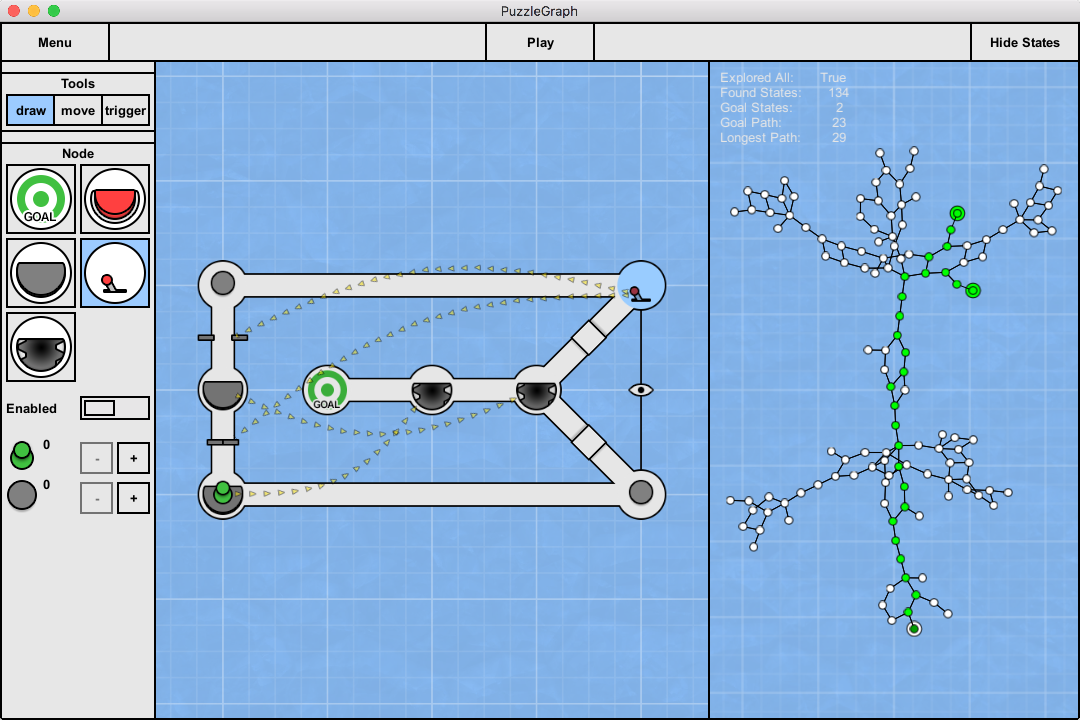 The technology behind state space visualization

There's probably many ways of implementing state space analysis and visualization but I can tell a bit about the approach I used for PuzzleGraph. You can check out the source code for more details. I'll assume a rudimentary familiarity with terminology from graph theory in this section.

Before you even begin implementing the state space representation you need to be sure your state space is succinct enough to be useful to visualize. What this means is that every change in state should be significant and correspond to a choice made by the player. Furthermore, the choices available at any given point should ideally be limited in number. If you have an exponential explosion, visualizations of the state space are not going to be of much help.

In PuzzleGraph I built this into the puzzle format itself. By building up the puzzles around discrete puzzle locations, I avoided a continuous or detailed representation of space. Most of the remaining simplicity in states followed directly from this, and I simply avoided supporting gameplay features highly tied to space or time, such as timer based mechanics or physically simulated interactions between objects.

In some cases it's possible to begin with a puzzle form with a somewhat richer state space and simplify or collapse it into fewer states by ignoring irrelevant details. For example, the game of Sokoban has a very high number of states if the states directly capture which grid cell the player is in. However, this can be abstracted away by only considering which grid cells the player currently have access to (without moving boxes) and recording that into states instead of the exact player position.

It's conceivable that decent methods for state collapse can be employed for many cases of full 3D worlds as well. For example, there are methods to automatically generate navigation meshes (nav-meshes) from arbitrary 3D geometry, and the way walkable areas are split into convex polygons there might well in some cases be a useful abstraction of player locations for the purposes of state space analysis.

Once you have a state representation where every difference in state corresponds to a meaningful player choice, you can begin the implementation. The first step here is to separate the state that changes from anything that doesn't change.

This means a departure from normal object oriented design where you'd have a toggle object that contains its own state as a member variable. Instead you have two different main objects.

You can test and verify your separation of puzzle design and puzzle state before doing any state space analysis or visualization. A first suitable step is implementing functionality to "play" the puzzle based on these separated states.

Once you have your separate state objects, you need a way to evaluate which new states it's possible to go to from a given state, and you need to keep track of that and build up a graph of the ways that the different states are connected. If you already implemented play functionality, you are already part way there.

Before you can construct your graph, you need objects corresponding to nodes and edges in the graph. The puzzle state objects are not themselves nodes. The states should be entirely self contained, so we need wrapper state nodes that contain both the state of that nodes, and information about which other states it's connected to. The state nodes don't contain references directly to other state nodes, but rather to state edge objects. Besides having references to the state nodes it connects, the state edges also store which kind of action the edge corresponds to. This can't always be derived just by looking at a before-state and an after-state, so we need to store it explicitly.

To explore the state space you need these data structures:

You can then explore the state space according this this algorithm:

Now you have a graph data structure representing the puzzle state space, but no easy way to inspect it. All that's really needed here is figuring out at which position each state space node in the graph should be drawn. From there on it's easy to draw each node at its given position, and draw connections between connected nodes.

Figuring out the positions is the tricky part then. There are algorithms and even frameworks available for this, but in the end I ended up not using any of them and just go with my own implementation.

The overall trick is to do a little almost physical simulation where nodes have spring like connections between them, with each spring connection having an ideal distance it attempts to pull or push towards. The two main challenges here are:

The first of those is only done once when the state node graph layout is initialized. The ideal distance is calculated as the number of state changes required to go between the two nodes, either one way or the other. In PuzzleGraph every type of state change adds the same amount of distance, but this could be made different if some state changes are regarded as more significant than others.

The second part is done iteratively, stopping perhaps when the nodes don't seem to move much anymore. It took quite some experimentation to get something that worked reliably for a wide variety of graphs. I calculate an adjustment length as the difference between the current distance and the ideal distance, divided by the squared ideal distance. This is then multiplied with a constant of 0.1 which seemed to be about the highest value I could use that converges fast without causing oscillation, explosions, or other instabilities.

That's the basics! Some other things to do is marking state nodes that are part of shortest solutions paths, or which are fail states from which it isn't possible to reach a goal state. See the source code for more details!

You can follow the development of my procedural projects and general technical game dev blog posts at the runevision blog or on twitter.