In the wake of GDC's first Board Game Design Day, Gamasutra chats with Warren Spector, David Sirlin, Soren Johnson, and other devs about the enduring value of studying (and playing) tabletop games.
Alex Wawro
Blogger
March 29, 2017

Video game devs' interest in tabletop games has been growing for years, to the point that at this year's Game Developers Conference there was a whole day dedicated to studying them: the Board Game Design Day.

Since most of us grew up playing board games, this begs the question: Why now? What is it about tabletop games that remains enduringly valuable to devs of digital games?

After chatting with a few devs about this during and after GDC, a few common answers emerged. Let's get the most obvious one out of the way up top: games are games, however you play them, and game designers were messing with the mechanics of chess, rummy, and Dungeons & Dragons long before they were thinking about MOBAs or immersive sims.

"We would have no video game business without [Dungeons & Dragons co-creators] Gary Gygax and Dave Arneson," veteran game designer Warren Spector told me at GDC 2017. "I always say that every game developer should get down on his knees once a day, face towards Lake Geneva, Wisconsin, and say a little prayer of thanks to those guys."

He was speaking to something a lot of game designers can empathize with -- that feeling that you are in some sense standing on the shoulders of game designers who came before, and who worked out how to create endlessly playable games with just a pencil, paper, dice, and maybe some figurines.

"I find that board games allow me to more clearly take apart mechanics. They allow you to make your thoughts clear, before you start to put code together."

While the video game industry has never forgotten its roots, in recent years appreciation for tabletop game design seems to have surged. When League of Legends wrangler Riot Games released its first board game last year, producer Chris Cantrell told Gamasutra that it was in part because the tabletop game business was "an area where we see a lot of tremendous growth and a lot of exciting innovations happening."

Some video game devs have been saying this for a while, of course; Mohawk Games' Soren Johnson has written and spoken about the value of studying tabletop games for years, to the point that he helped put together the afore-mentioned Board Game Design Day at GDC this year.

Not everyone was excited about the show's growing focus on tabletop game design; one developer from a well-known studio asked me, earnestly, why anyone would want to make or play a tabletop game when they could rely on a video game having a computer keep track of all the "boring numbers."

But for the most part, the devs at GDC I spoke to were excited about studying tabletop game design -- something Johnson says has been true for some time.

"Board games can do so much with so little"

"We've been adding more and more board game talks over the years, and there has been increasing interest in the topic at GDC," he wrote in a recent email. "Board games have been undergoing a renaissance in popularity, diversity, and innovation over the last two decades, so it makes sense that video game developers would want to know more about how board games are developed." 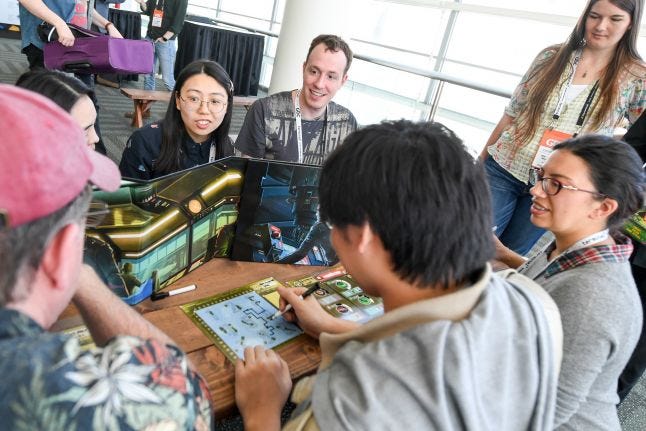 So what, exactly, can you as a video game designer learn from games that are totally analog? Johnson suggests devs can learn valuable lessons about efficiency and transparency from studying tabletop games, pointing to successful video/board game hybrids like Hearthstone as an example of what can be achieved when you apply those lessons well.

"The most obvious lessons are how board games can do so much with so little (as board games tend to have a much smaller rule set than video games) and the value of transparency in game design (which is an inherent aspect of board games as all rules must be visible and processed by the players,)" he wrote.

In a sense, the limitations inherent in tabletop games demand efficiency in design; longtime game designer David Sirlin says that efficiency can be seductive, especially if you're feeling overburdened by the expense and scope of big-budget game production.

Sirlin gave a talk as part of the Board Game Design Day at GDC this year that was all about game design lessons learned working on Puzzle Strike, his competitive tabletop deck-building game. As a longtime video game designer (Super Street Fighter II Turbo HD Remix, Chess 2), Sirlin says he was drawn to studying tabletop games and eventually changed careers to focus on tabletop game design for one reason: low production budget.

"I worked in the video game industry for many years, and I kind of like, snuck a peek at board games," Sirlin told me. "I thought 'I would like to make a game. How can I not fall into that trap, that I see killing all these video game companies I'm working with?' Well, I want to make something that has no burn rate. So that if I need to take another month, or another year, or however long it takes, nothing can stop me. I can just work on it until it's done. And I only have to worry about myself. And I didn't see any way to do that in video games, at the time. But I could do it in board games. So that's why I started working on a card game. Simply because I wanted to make a game, any game, that I felt was high-quality. And that's how I knew how to do it."

Sirlin is now spending significant time working on video games again (most notably his crowdfunded fighting game Fantasy Strike) and says he misses the low overhead and "efficiency of design" that are inhernet to tabletop games.

Those virtues also make the realm of tabletop games an excellent place to prototype your next video game before you pour a bunch of resources into development. While at GDC I bumped into Zephyr Workshop COO Sarah Como (in the Shut Up & Sit Down board game lounge area, naturally.)

"I think if you're making a digital game, you should always paper prototype it," Como advised. "Because it's the fastest way to figure out: do the things work?"

As an example, she noted that before embarking on production of the mobile game Florafiora she and her team quickly doodled on some index cards and created tokens they could use to model (and mess with) the game's various mechanics. 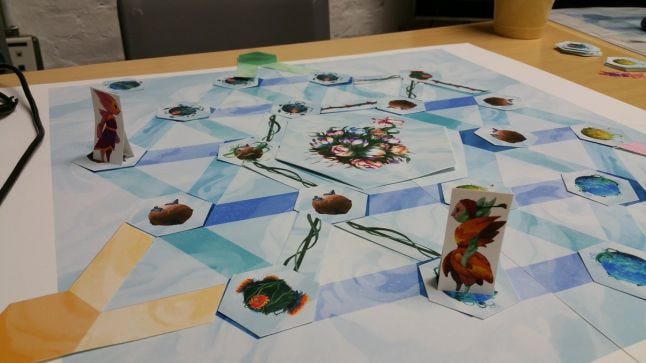 A tabletop version of Florafiona

"You can get that immediate feedback of 'does this make sense?' And then from there you can start building systems," she said. "So I think people should always be making paper prototypes of games, just to at the very least see if it's even a feasible idea. Of course then you need to get into the digital space and start prototyping that way as well, but doing it on paper is a really quick and dirty way to figure out 'does this even work?'"

Incidentally, this is a really good excuse to keep a bunch of board games around the office. Game designer Gil MacLean, who currently serves as director of Melbourne-based studio Inn Between Worlds, says that in his time at Electronic Arts he spent a few years on a team that would basically prototype every potential gameplay mechanic by raiding the office supply closet and board game stash.

"We would steal miniatures from everything you could imagine; from an advanced Hero Quest set, from an old 40K set, anything we could find. It didn't really matter -- we just needed raw materials," MacLean recalled. "And then we would map that out on paper and we would game that out in a little room, over and over again. Refine it. Before we would bring a design to a programmer for implementation. Because, you know, it saves time, it saves money, and often you work out a lot of the kinks before you even get it into an engine."

"It saves time, it saves money, and often you work out a lot of the kinks before you even get it into an engine."

What's important here is that the game projects MacLean is referencing weren't tactical strategy games, or digital board games, or other video games that might seem easily analogous to real tabletop games -- he's talking about games across the genre spectrum, from a third-person shooter to a party-based RPG.

It's not just designers, either -- at GDC I bumped into more than one programmer who said they had an easier time thinking through their work on video games by studying and playing tabletop games.

"I find that board games allow me to more clearly take apart mechanics," said game developer and programmer Liam Routt. "They allow you to make your thoughts clear, before you start to put code together, where everything moves faster. I find the process of going and designing a tabletop game, which I’ve done a couple of times on weekends with friends, is a great start to working on a bigger video game. You know, 'lets just make a game, doesnt matter what sort,' spend a couple days on it, focus in on mechanics and moves, all that stuff, and that really gets your brain working."

"And you have flexibility, right?" MacLean interjected. "If you wanna rewrite the entire win condition for the game, you can do that without rewriting every single bloody bit of code."

"And without assets," added Routt, with a laugh. "Unless you count, you know, things you draw on bits of paper."

"Tweaking one thing on paper is so much easier than having to tweak one thing in code and having to bugcheck that," adds Murray Philbrick, who now works alongside MacLean at Inn Between Worlds. "I was lead designer on Puzzle Quest 2, and with that, every single spell in the game was done on paper first. Just to check for balance. Every single one. I mean, the entire game was playable on paper beforehand."

So while this was the first year that the Game Developers Conference lined up a whole day's worth of talks about board games and board game design, many devs at the show felt tabletop games had always been a critical piece of their work. They're (relatively) cheap, demand efficiency in design (because players have to understand and keep track of everything) and serve as useful prototyping tools for more complex, more expensive projects.

"It's just a massive time-saver," said Philbrick. "It’s pretty vital for a lot of things."