Why It’s OK to Copy

An exploration of the difference between copying and referencing in the games industry.
Alice Rendell
Blogger
December 04, 2012

I recently started a Masters Degree and as an introduction to the course we were asked to write an essay about plagiarism, and what it really means to ”copy” someone’s work.
The conclusion was that plagiarism is only classed as such when you try and pass off someone else's work as your own, but taking someone else's idea, referencing it, and building upon it is not just allowed but necessary to accomplish a well rounded piece of writing.
This got me thinking about the types of copying that appears in the game industry, and it seems to me as though we are a bit lost between two ambiguous points of plagiarism and referencing.

Whose Idea Was it Anyway?
As a game designer there is an awful lot of emphasis on having ideas. There seems to be this notion that a good game designer is someone who can think of ideas that no-one else has thought of. I disagree with this, having ideas is of course one branch of the tree but it is not where the roots lie. The roots lie in knowing your reference material. What games have influenced the idea, why did they work/didn’t work, and which games made a good point which is worth taking further. Without any of this you are effectively just having ideas for the sake of having ideas. If I take an example of a recently successful game, ‘Draw Something’, you can see that the main concepts of the game are nothing original. The turn-based mechanic of ping-pong challenges existed long before with games like ‘Words with Friends’’ and the core gameplay itself is a fairly obvious version of the board game ‘Pictionary’. If you dissect the game’s main features it would appear that there are no original ideas, but this game is not an example of plagiarism. ‘Draw Something’ may not be original but it is unique in the sense that it has taken all these elements from different games and put them together in a new way that works; in other words it has been well researched, referenced, and analysed, and has come to a good conclusion.

Survival of the Fittest
However, what would have happened to ‘Draw Something’ if the game had not been good, with poor execution, lots of bugs and a bad user experience? Would it then be reasonable for someone else to take the idea and evolve it? For example, Sir George Cayley contributed far more to the research of aeronautics than either of the Wright brothers, so who should get the credit of “inventing” the first airplane? The reality was that Cayley’s execution just didn’t work as well as the Wright brothers', who had evolved his ideas into something more credible. So is it fair that the Wright brothers are better known in relation to aeronautics than Cayley? My answer would be yes! The Wright brothers made a better execution, and a more realised version of an airplane, and if they (or anyone) had never been allowed to evolve Cayley’s ideas because it would be “copying”, then air transport might look very different than it does right now. We need other people and new thinkers to take ideas and evolve them. To take the torch and hand over the baton and let someone else carry on the race. We cannot be precious about ideas and should embrace the time we send them out into the world like a child flying the nest, wondering what it will grow up to be. This is what has been happening for generations in science and philosophy, this is what should also be happening in the games industry.

But We’re Missing the Point...
Although, as I have said, I am all for taking ideas and building on them, there is a big difference between being inspired and outright stealing. For example, I’ll give you three guesses if you can tell me where the idea for this iOS game ‘Zenda’ came from: 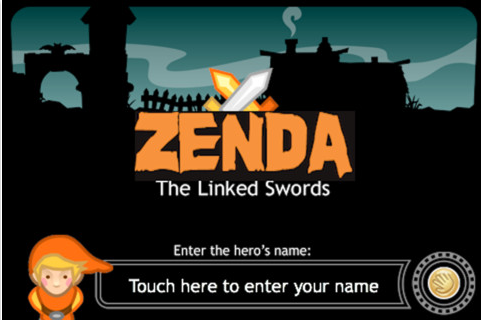 What’s that? You don’t need three guesses?...I didn’t think so. In no way is this evolving, building on or referencing. This is (and how do I put it delicately) blatant and shameful cashing in! 'Zenda' is, quite obviously, missing the point. However, this is a fairly black and white example of copying, but what about games which fall into that weird grey area, and at what point do we need to draw the line? Working in social games I see my fair share of clones, particularly from notorious copycats Zynga. I would consider many Zynga games as your academic equivalent of paraphrasing. Games such as ‘The Ville’, and ‘Cafe World’ have effectively taken another game and rearranged the elements a bit to make it seem like it is their own work. Zynga, you are fooling no-one and you are also missing the point. In no way is this credible referencing, and in the academic world would be considered as plagiarism.

But Wait! There is a Light...
As depressing as it can sometimes be working in social games, seeing clone after clone jumping on the wagon, every so often something comes up which does it completely by the book. When you take a closer look at ‘Triple Town’, for example, the core ideas of the game are nothing new. Match-3 mechanics and city building have existed for many years, but rarely have they existed together in quite the way that has been realised in ‘Triple Town’. What the game has so successfully done is take existing game mechanics and merge them together to come up with something truly unique. What is the point of inventing a brand new flavour of ice cream if it isn’t going to be as good as the 1001 other flavours we already have? Instead maybe try mixing two or three flavours together, to create a brand new combination that just might work.
.
Conclusion
My point of this article was not to say that blatant copying of someone's ideas is ever acceptable; or was it to say that you shouldn’t ever have new ideas. Instead we shouldn’t shy away from using what is already out there because it may be seen as “stealing an idea”. We can (and should) embrace inspirations and use them as the foundation blocks of future projects. That is, after all, how we can evolve as an industry, and I soon hope that the area of games I work in will follow this lead.