The article is a responses to a Twitter tread asking players and developers about games which made them cry (from grief or from joy). Using the data collected, the article analyse which games made them cry & the reasons why players cry in video games
Yifat Shaik
Blogger
December 12, 2017

“Hello twitter, did a game ever made you cry? produce an emotional response (that is not fear/anxiety)? please tweet your answer”

The reason I sent the tweet was quite simple, I just finished playing Journey (again) and was looking for some recommendations for games that produce that same kind of emotional experience. I was also interested in the emotional engagement we have with games and the creation of positive/negative responses. Since I am not exactly a famous internet personality, I didn’t expect much from the tweet (mostly a few answers from friends), but after a few retweets from more prominent game industry folks the tweet blew up for a couple of days.

Eventually the tweet was retweeted 68 times, liked by 268 users, had 607 replies and a couple of private messages. Some replies only listed names of games, but a large percentage also shared the reasons why they cried or got emotional playing a specific game, some even sharing personal stories.

The replies highlighted some very interesting points about players emotional responses to games, and what kind of games make people experience the emotions mentioned in the tweet. My assumption was that while all games elicit both negative and positive emotional response, they tend to be on the vain of anxiety(negative), anger(negative), frustration (negative), confidence (positive), comradery (positive) pride (positive) and enjoyment (positive). While emotions like grief, sadness, awe and joy (feeling associate with crying) are almost exclusively tied to the game narrative and not the gameplay (mechanics).

While my theory that most of the games that will be mentioned, will have a strong narrative component, and that those emotion will be connect to the narrative, was proven to be correct, I was rather surprised at some of the answers I received. Specifically, I was mildly surprised by the reasons players cry in games, and felt that this might be a good opportunity to analyze the answers and see if we can use those in developing a theory about those sorts of emotional responses in games and possibly use them too develop games the illicit those sorts of responses.

Some notes before I start my analysis:

Which games made players cry?

Overall, from the tweets I collected, 224 games were mentioned, but out of that list only 15 games received 10 or more votes and over 100 games only received 1 vote.

The next stage was separating the games into genre, in hindsight this might not have been necessary but ultimately it did help with some of the classification. The classification was mostly based on the genre classification from Wikipedia[2], and I tried to choose the genre that I felt fit the game the most. 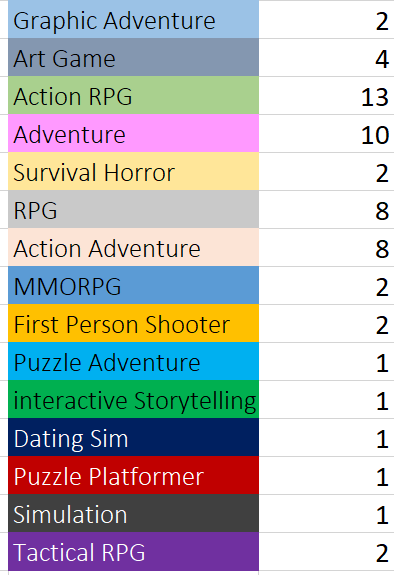 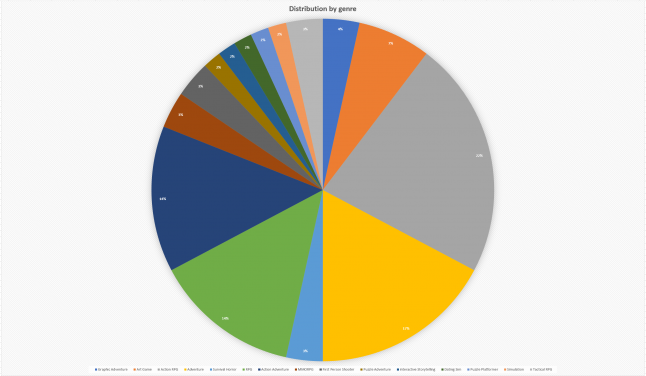 Notes about the classifications:

As can be seen from the graph above, most (if not all) of the games cited have a strong narrative component, and in most cases the story was the part that player cited as the reason for their emotional response. The most prominent genre in the list is RPG’s, which includes a few sub-genres like Action RPG and MMORPG’s, mostly due to their complex overarching narrative and player investment with the characters (I will expend on this in the next part). The 2nd prominent genre was Adventure (and its sub categories), most of the games with a strong linear narrative and relatively simple mechanics fell into this category. Very few of the games in the list are focused on mechanics and gameplay, and not on narrative.

While I suspect this stage might not have been necessary, as there was nothing particularly surprising about the result. It confirmed that narrative is an essential part of creating an emotional response in players, as well as the fact that pure gameplay/mechanics will have a lot more difficulty to produce those sorts of emotions. By all account, out of the list only Journey, and maybe The Beginner Guide, produce those emotions by not relying strictly on the narrative. It was helpful, in understanding that it is not necessarily just the story that influences those emotions, but in some games (especially longer RPG’s) the impetus is much more about their identification with specific characters and their own avatar.

So why do we cry in games?

Using the data collected before, I decided to separate the games into a few categories based on which aspect of the game the promoted emotional response from the player.

I separated the games into five categories:

Narrative/story: games in which the main story/narrative was cited as the reason for crying/emotional response. Games like, Life is Strange and To the Moon fit into this category

Investment in character/story: games in which the crying/emotional response was not specifically the result of the story, but rather the relationship the player developed with the characters, story and world. This includes their own avatar. Mass Effect 3, and World of Warcraft fit into this category as well as any games that is based on character interactions (like dating sims)

Visual: The use of visuals to produce an emotional response, this includes creating a character design that produce sympathy with the player.

Gameplay: Games in which those specific emotional responses connect to the mechanics themselves. Those are hard to identified, but I felt that a few games in the list fit into this category.

Music: As mentioned in the beginning of the article, some responders cited specific musical scores as the reasons for their response. While I did not include instances in which only the music was cited, I do acknowledge the importance of music and sound when it comes to emotional connection and responses to a game.

The results are as following:

I sorted each game into two criteria- The main reason and the secondary reason which I identified to be the reason that they cried while playing the game. For example, a game like Mass Effect 3, will have identification with character/story as it’s main criteria, and narrative as secondary while a game like Journey will be more focused on visuals and music/sounds.

A few notes on the results:

While the results were as consistent as the genre before (a combination of narrative & investment in characters/story was the most prominent combination), the separation between the categories helped in getting a clearer picture of my initial question. It turns out that the answer to “what makes players cry?” is a bit more complex than just a sad story. It is a combination of several factors (some relate to the narrative but not all) that produce those specific emotional responses.

It does emphasize the importance of story in games, and its ability to produce complex emotional responses from players that gameplay it self might not be able to.  This is a factor that we (as developers) should take into account, especially as the medium grows and the audience needs and interest change. I also think that we should look at the challenge of creating games who produce grief or joy by using gameplay mechanics and not just relaying on narrative to do the job for us.

[1] I complied the list pretty quickly, so it is very likely that there are some spelling mistakes or incorrect attribution

[2] in some cases, I used Steam, but Wikipedia was the main source