What 10 seconds, procedural generation, and fish do for shoot-'em-up design

Ten seconds is not a lot of time to set up a challenge that doesn't make the player feel like they're just being thrown into the middle of chaos. It's not a lot of time to get players hooked on a catchy snippet of music. And it certainly isn't enough time to completely change up mechanics and gameplay of a well-known and much-beloved game genre. So why did Neon Deity Games try to do all of that in their silly shoot-'em-up Shutshimi: Seriously Swole? More importantly, how did they get it to work so well?

"Iterative design," said Garrett Varrin, programmer for Neon Deity Games. "Tweaking the formula constantly. We began with the basic bare-bones concept of a shmup: groups of enemies spawn at specified intervals. From there, we had to figure out the size and frequency of those intervals."

The developers knew they wanted to create a shoot-'em-up, but with a single concept driving all of the gameplay and design: a strict time constraint. Shutsumi breaks the typical shoot-'em-up experience up into randomized waves of enemy encounters that last no longer than 10 seconds apiece. (You play as a gold fish, and their limited memory span is the justification given for this ludicrous constraint.) This meant taking a look at every aspect of typical shoot-'em-up design and asking if it fit within the time limit, and how to make it work best. 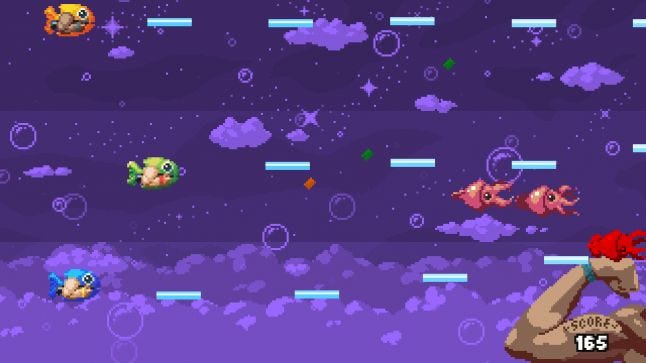 "In a stage that only lasts 10 seconds, you can't really afford as much dead space as you could in a stage that lasts 200 seconds," said Varrin. This meant combat had to start right up in order to keep the player engaged. Any lull would be immediately noticeable and risk making the player feel like they didn't accomplish anything with the wave.

The time limit also made things difficult when it came to power-ups. The game could have chosen to do without them, but part of a solid shoot-'em-up is the spectacle of new weapons that aid in combat against wild bosses. Without those new weapons, the base gameplay may have grown stale over time. How do you explain the workings of a new power-up with no lull in the action to play around with it? Where do you place them in-game to grab them amidst all the chaos?

"Power-ups couldn't really be  in-round, like most shmups do, so we conceptualized the idea of a shop." said Anthony Swinnich, sound designer on Shutshimi. The addition of an in-game power-up shop solved a few issues. It meant that anything moving during the shmup sections was an enemy to shoot, so players wouldn't have to look at targets and assess whether they were friendly or not. They also wouldn't have to think about whether their current power-up was better than the one floating toward them, or try desperately to figure out what their newly-acquired weapon did in the middle of a dogfight. 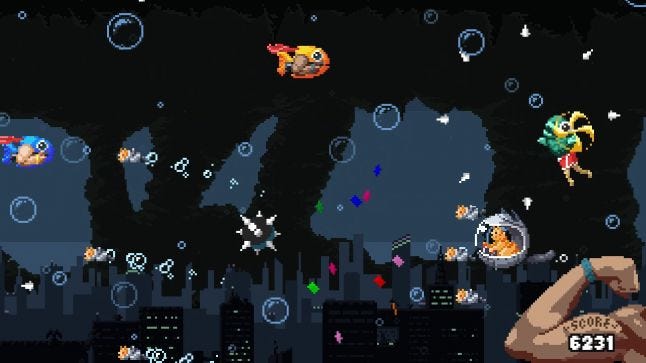 Doling out power-ups in the controlled environment of a shop allowed players some time to think about what they wanted outside of combat. It also lets the developers set up a tiny zone at the beginning of each stage so that they could try out the new power they just gained before using it during the main fight.

The shop also provided a useful transition between stages, as the shooting sections always end the moment those 10 seconds are up. "The rounds stop abruptly, so something had to break up the action, right?" said Swinnich. The game could have felt disjointed if it hurled players directly into a new stage right as the time limit passed, but the shop gave players a moment to take in the change of stages.

While useful to make power-up choice more player-friendly and to also make the game flow, work had to be done to make sure the shop was in keeping with the game's pace. This meant that the shop wasn't just a moment to relax, but yet another way for the game to challenge its players with the short time limit. 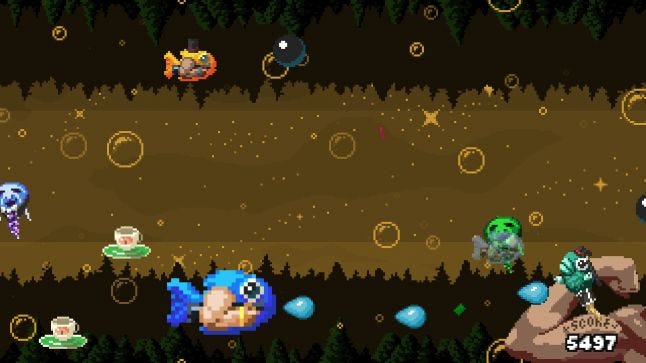 "We wanted to keep the shop in the theme of 10 seconds, giving the player this give-and-take flow between shooting and shopping," said Swinnich. "It dawned on us that we could use the 10 seconds against the player in a hilarious way, by giving them obscenely long text descriptions that hide what item they'd be picking. This creates a sense of panic, and helps keep the player engaged and the game's intensity up in what would otherwise be a pretty ho-hum item selection round."

During the shop round, players are given a choice of three power-ups. These each come with a wall of text to describe them, except that this text has nothing to do with the power-up. It's often just silly sentences and nonsense, but with a keyword or phrase hidden within that gives an idea of what the power-up does. This keeps up the fast pace of the shoot-'em-up rounds, but introduces a reading comprehension minigame in order to add some variety.

"To add to the sense of panic, we also added a centralized countdown clock, so the whole time you're trying to read through the lengthy descriptions, you're reminded that you're almost out of time, perhaps even causing you to accidentally pick the wrong power-up," said Wayne Kubiak, artist for Neon Deity Games. A timer further complicated the player's life by adding a distraction (drawing the player's eye from the descriptions) and increasing intensity during the time spent choosing what to pick. 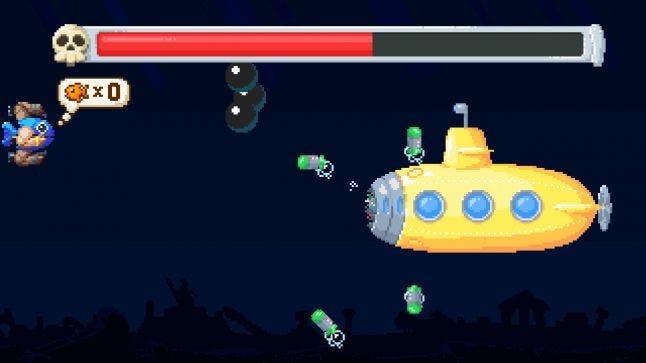 Power-downs were also thrown into the mix to increase the repercussions of choosing incorrectly. These added a bit more pressure during the shop stages, but also increased the challenge during the regular stages. The developers created some downright nasty power-downs, too, as the player would only have to survive with them for a single 10 second gauntlet. "It allowed us to add more challenging power-ups like inverted controls that could easily end a run, but gives you the chance to just hang on for those 10 seconds," said Kubiak.

Power downs added variety to what might otherwise be a straightforward run, but the developers also used a humor to keep things interesting. "Short levels allowed us to create interesting difficulty fluctuations or unique player interactions. For instance, there are fun free waves of action where you could obtain an admittedly overpowered one-wave weapon, or instead of fighting, you're placed in a bouncy castle to just flop around like a fish," said Kubiak.

The kind of thinking that tied a goldfish's short memory span into the game's 10-second shoot-'em-up action opened the game up for some humorous powers and stages. A lighthearted player could appreciate the break, and more serious ones would only have to endure the goofiness for a few seconds. 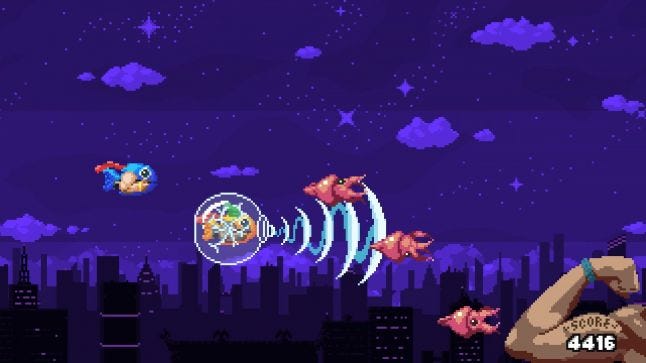 The gameplay itself would need variety to stay compelling across hundreds of 10-second stages, though. "Since we were making our stages 10 seconds long, we had to make a lot of them. Hand-crafting thousands of 10-second stages isn't feasible, so we procedurally generated them, and constantly tinkered with the input parameters until they felt right," said Varrin.

Randomly generating the stages ensured that every run would be interesting for players, while also keeping them from guessing what was coming next. At the same time, the developers keep the difficulty level climbing steadily to stay appropriate to how long the player had been playing. "There's actually quite a robust amount of input variables going into the formula that generates the levels: the number of players in-game, the number of bosses killed, the wave number, the enemy types available, the power-ups in play - all that and more factor into what spawns and how often," said Varrin. 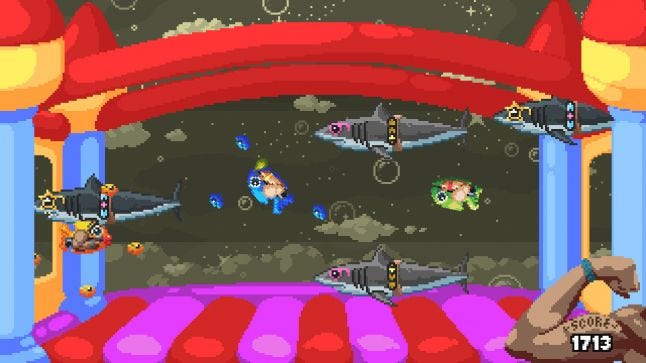 That could have all been undermined by some irritating music, and when you only have 10 seconds to play, it's easy to create repetitive loops. "I focused on trying to keep the songs interesting for active listeners, but unintrusive for those who pay less attention. Most of the songs are sectioned into three parts in the tracker, so the most important part to make catchy was the start of the song," said Swinnich. The results were songs that were quite catchy from the moment the player started a stage, but then change up to keep from getting dull.

Tying shoot-'em-up gameplay to the concept of 10 seconds was a complex process, but ideas soon flowed into one another. By keeping that concept firmly in mind, Neon Deity Games were able to examine every aspect of the genre and see how best to tune it to their needs, creating a game that is both familiar and yet wildly unique.