Unintended ways of playing as a game design tool in Misshapen

Misshapen Pumpkin Extravaganza is an arbitrary contest we held on Halloween that forced us to play our own game in unintended and creative ways, leading us to new paths of experimentation.
Nico Saraintaris
Blogger
November 01, 2019

Hi, there! Misshapen dev team here. What? Haven’t you heard about Misshapen? Misshapen is a story-driven body-horror simulator where you can’t kill your enemies but you can distort their bodies. Grow lumps, build weird living structures and dive into the dark mysteries of Zheltikov’s military base!

So we’re making a weird game —an early prototype was featured at the last Experimental Gameplay Workshop at GDC 2019—. Still pretty early in development, and with some important milestones ahead of us, we had an idea: Why don’t we add on top of all of our duties a totally arbitrary one and hold some crazy contest among the dev team during Halloween? That’s how we came up with the Misshapen Pumpkin Extravaganza! We chatted a bit about it, set some rules and there it was.

Sometimes playing your own game in unintended ways let you think about its issues and potentialities from a whole new perspective. In terms of game design, Misshapen has a complex verb system: GROW LUMPS, CUT LUMPS, MOVE AND ROTATE DETACHED LUMPS, THROW DETACHED LUMPS, GROW STICKY LUMPS, etc. The idea of the game is to use all of these to solve certain situations: grow an umbrella out of an enemy’s back to cover from deadly waterfalls, create a living bridge to access new areas and so on. You know, normal stuff.

So by having all these abilities players can get creative and start making stuff. But what about pumpkins?

Arbitrary, don't you think? But this self-imposed constraint —to make a pumpkin out of an enemy’s back— allowed us to look at all the systems we’re creating and just experiment. Consider for example Nicolás Recabarren’s approach:

Geometry is a beautiful thing. Just look at the pumpkin structure and pay attention to those patterns from the making-of. So satisfying. 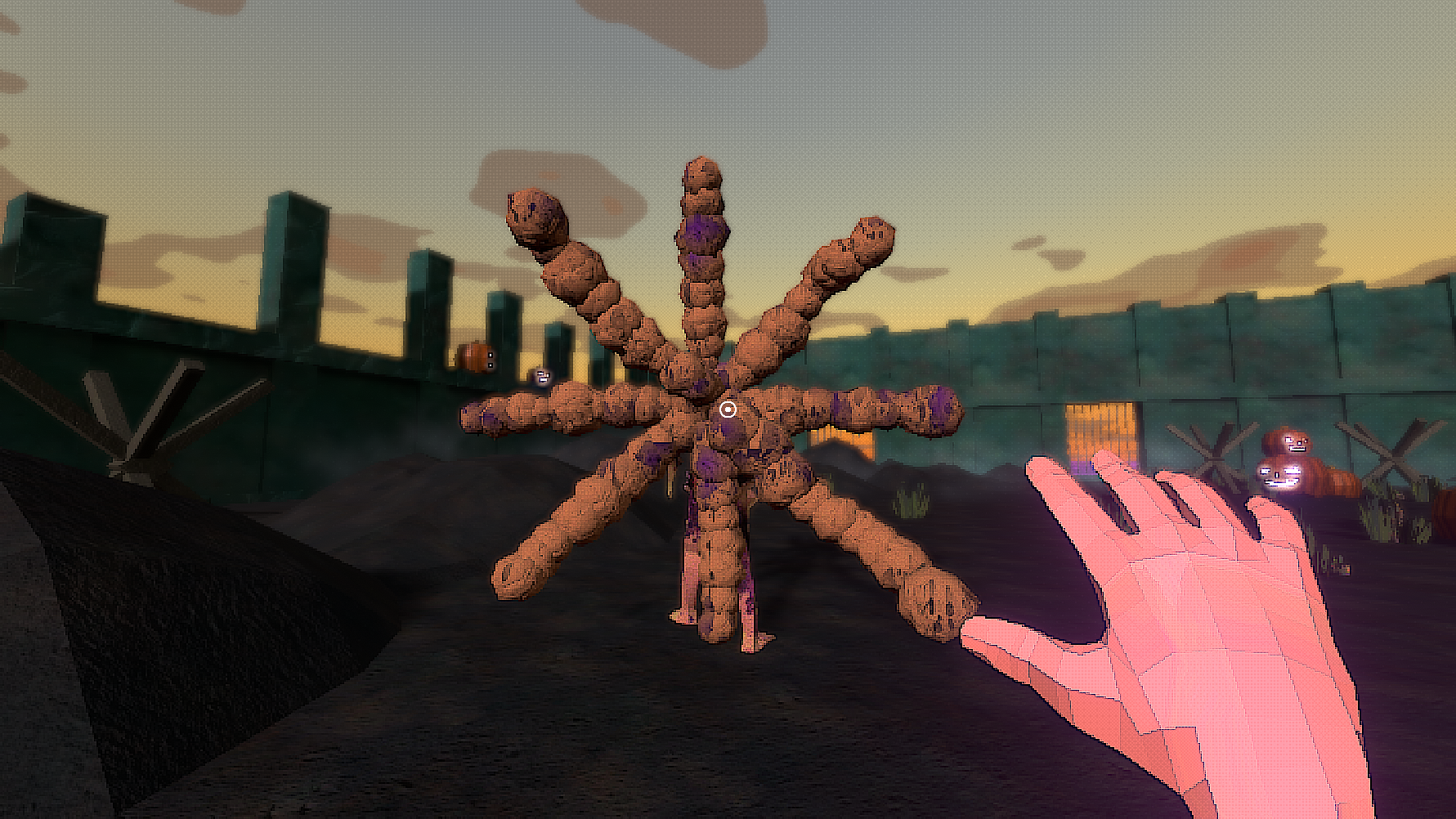 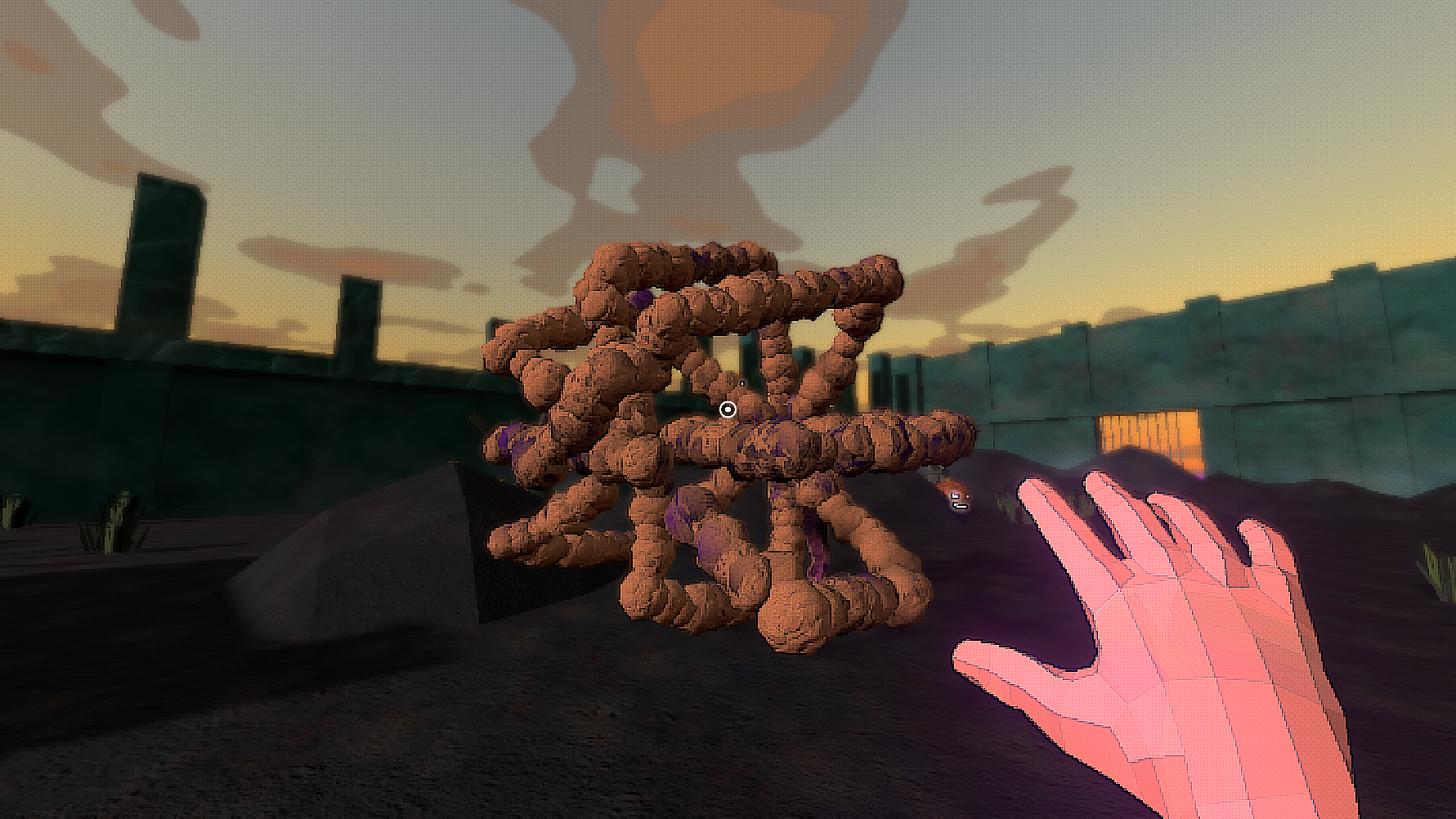 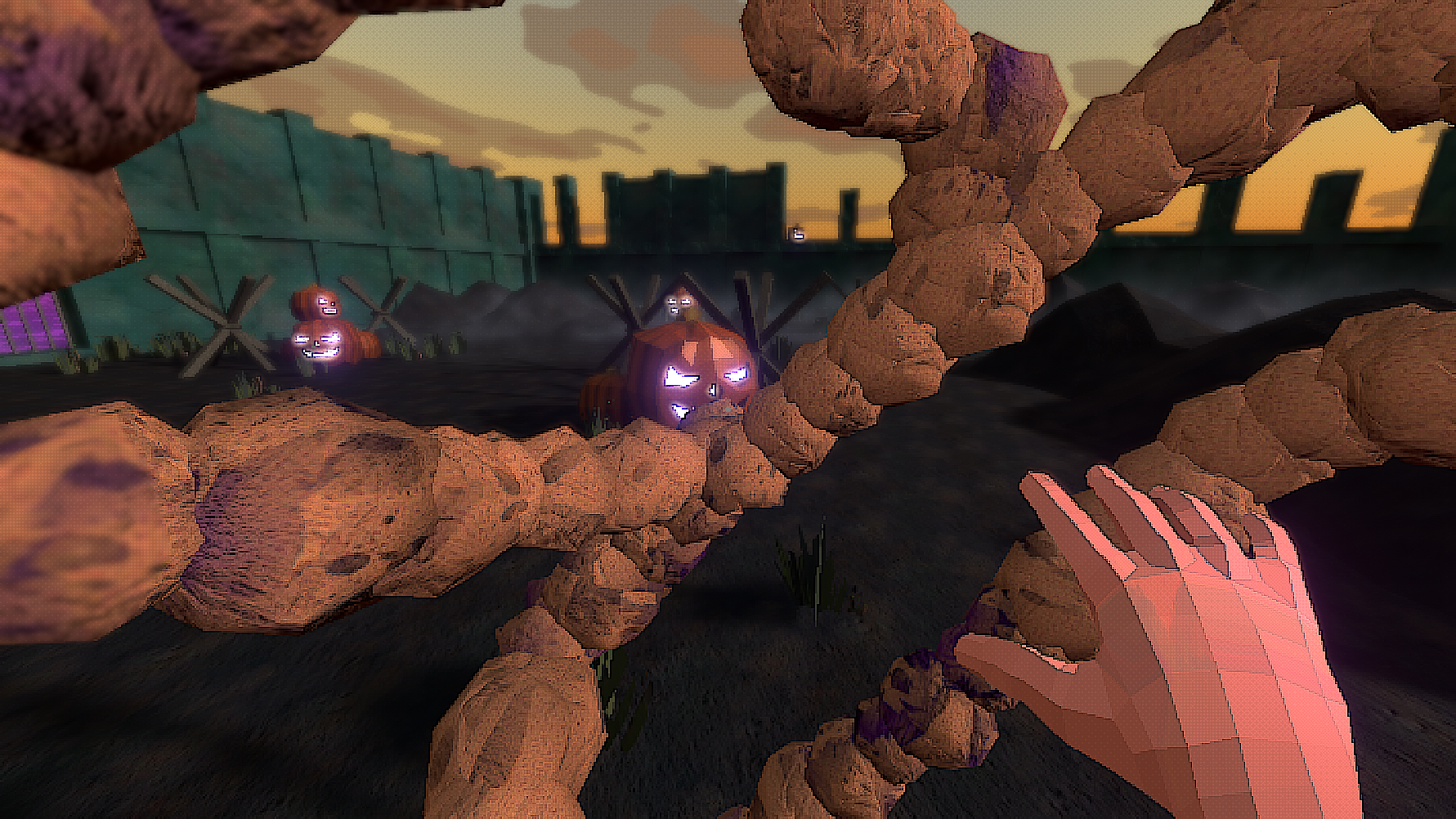 Fernando Martínez Ruppel, on the other hand, made this:

Fernando is an illustrator, so using the distorting powers as a brush seems more natural to him. And he even thought about the effect of cutting off his creation from the enemy to evoke some creepy pumpkin laughing. 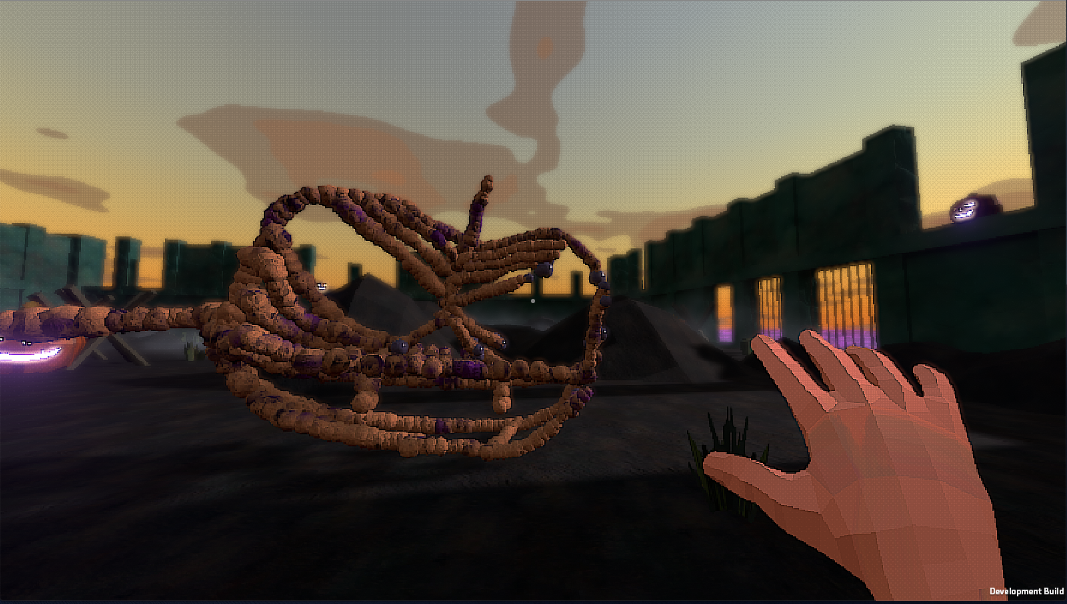 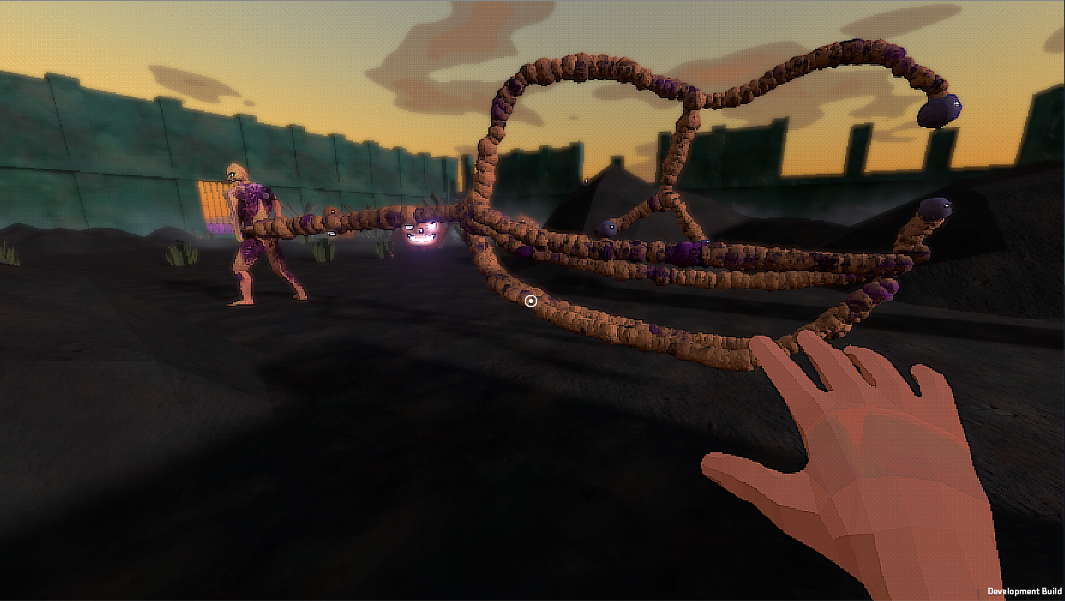 Nico Saraintaris took yet another approach. He made a circular base, cut it off, used sticky lumps to create a weird structure (like a pizza saver) and used even more to stuck it all back together. Finally, he distorted the enemy further for the final touch: 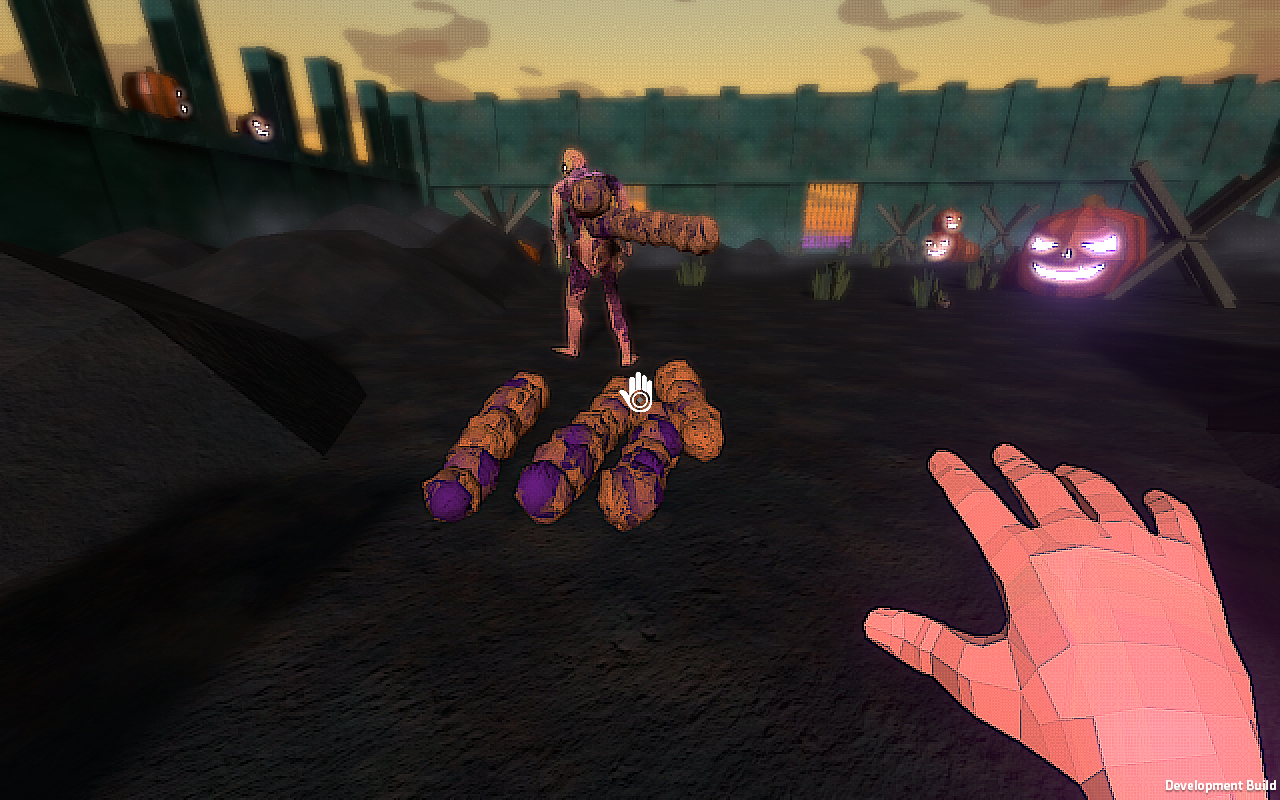 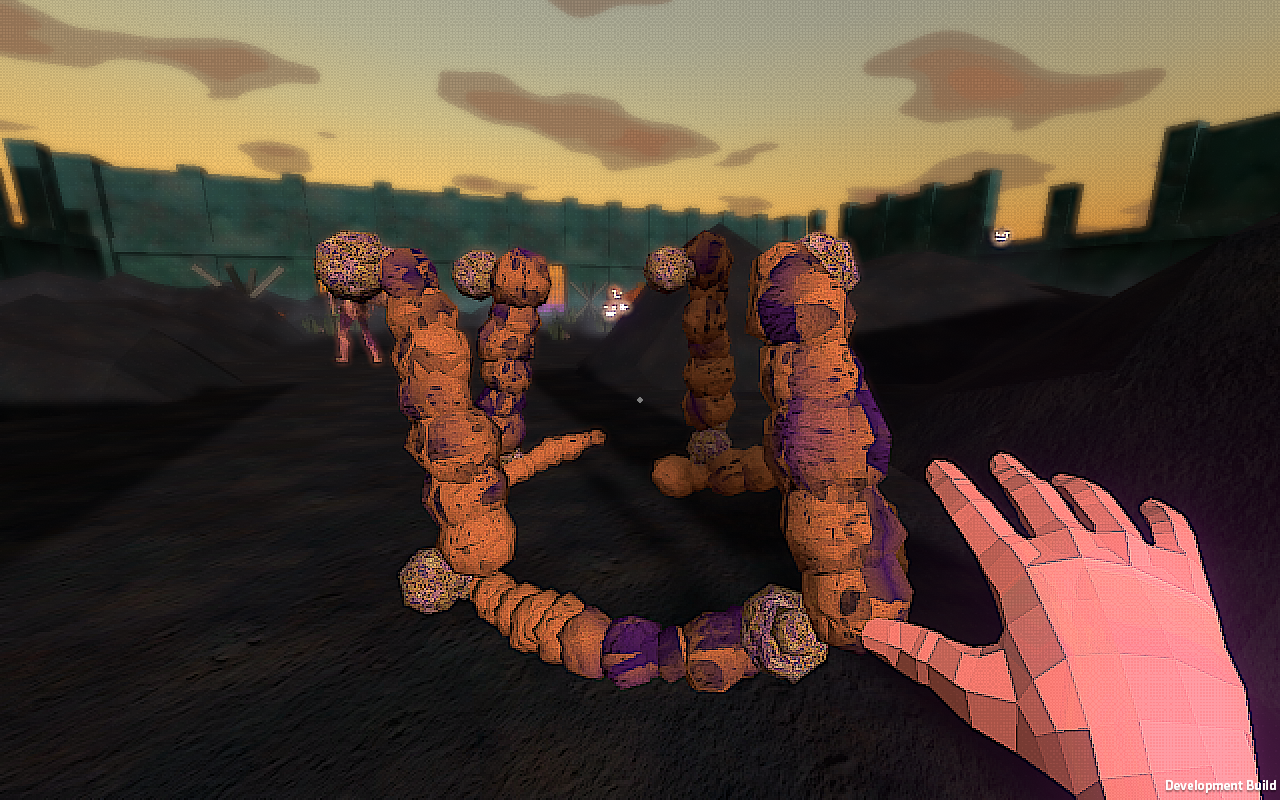 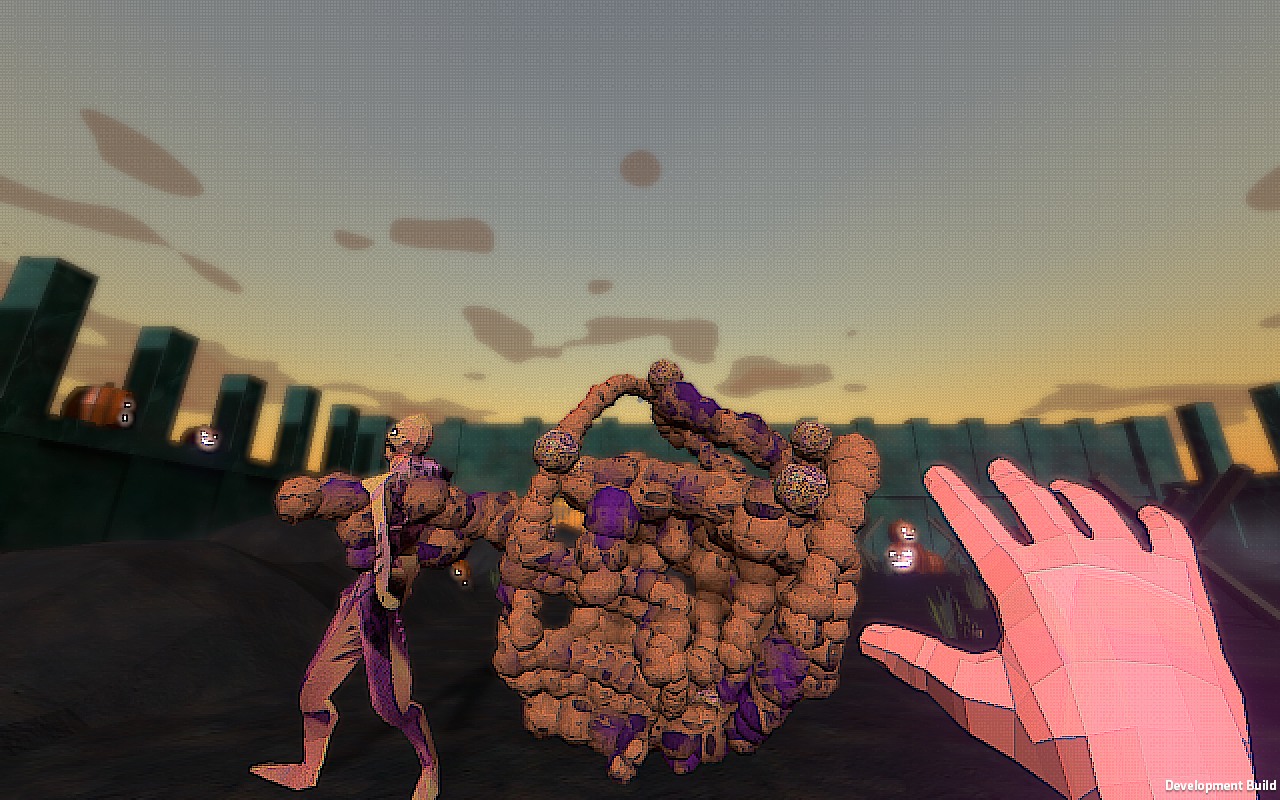 TL;DR: Three gamedevs and three different ways of growing  a pumpkin from an enemy's back.

The Misshapen Pumpkin Extravaganza can be understood as some marketing thingie we came up with or some quick break from the development of our game. But it can also be something else. It shows how arbitrary exercises can make designers play their game in ways they haven't considered before. And if you want to make something truly experimental, not knowing what you are doing is always a good sign.