Ubisoft soars into the VR space with Eagle Flight

Triple-A publishers have by and large been hesitant to commit to the VR space, preferring to let indies and startups lead the charge. But thanks to Ubisoft Montreal's experimentation-focused Fun House group, the publisher has been playing very seriously with VR -- and today, at the PlayStation Experience, revealed Eagle Flight, a new VR game set to be released next year for PlayStation VR, Oculus Rift, and HTC Vive headsets.

Gamasutra spoke to Charles Huteau, creative director of the project, to find out more.

Perhaps most interestingly, the project -- which casts the player in the role of an eagle soaring over a Paris abandoned by humans and returned to nature -- grew out of experiments in trying to create comfortable VR experiences that could appeal to a broad audience.

Unlike the more product-focused triple-A development teams at the company -- "it's pretty rare that we can let people prototype and experiment," Huteau says -- the Fun House group has a mandate to engage in R&D and create prototypes simply to see they have promise. 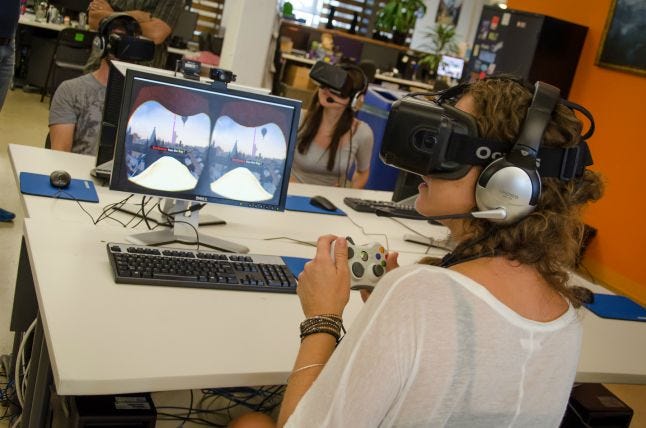 After a year of experimentation, the appeal of their ideas was proved "a pretty huge success," per Huteau, at this summer's E3 and Gamescom trade shows, where demos were held; work on Eagle Flight began in earnest after E3.

Fun House is "not free-form; we take the chance to say we can do new stuff with small teams in a short time to prove we have something, and after that we decide to make a game," Huteau says.  "If you realize you have something new and fresh, yes, we do a game."

VR can be for everybody

Huteau is a big believer in VR -- and its chance at having broad appeal.

"With Eagle Flight, we really have this objective of creating a more mainstream and more for-everybody-oriented products. Because we believe that VR is such an astonishing technology that I want to share it with my wife, my kids, my parents. I want them to year-one try it," Huteau says.

"That's why we alaso decided to go with a fantasy that is really mainstream, and really open to everybody. It's a nonviolent world, it's a come-back of nature in the city. You play an eagle, and you can explore and see that wonderful landscape of Paris in the nature." 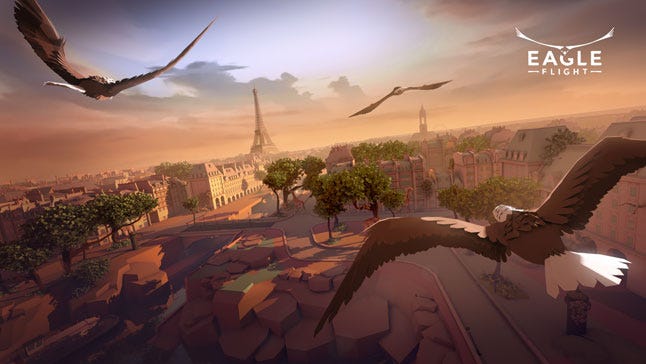 There's another upshot, too: The lessons Huteau's team learn by building Eagle Flight can feed back into Ubisoft Montreal's other teams, who are too busy crafting its sure-fire hits to stop and play around.

"I think that the triple-A projects count on us to explore, and diversify, and find new territories," Huteau says. "That's a really good thing about the structure of Ubisoft Montreal. We're not separated from the rest of the studio."

And this isn't just about developing techniques to reduce motion sickness or experiment with VR camera angles; there are design experiments, too. The company is famous for its open-world games, but Huteau's team, is taking them in a new direction for the company. That feeds back to Ubisoft Montreal at large.

"We have this concept of free flight mode... What we learned is that players are loving that. For once, there is no objective, there is no time pressure, there is no completion to make. They can, however, have an amazing experience and a really peaceful experience. When we discuss and present that with other projects, we find that it's very interesting."

"With a smaller project, we can do that. With ours, we can bring back answers. We can see if it's a good call or not, and at least we have this space to experiment."

Of course, though, the team is also learning vauable lessons about devleoping virtual reality games:  "we can focus on immersion and sensation," Huteau says. "We work a lot to polish the feeling of flying -- the sound, when you pass the trees."

Thea team focuses on "a really good emotional and sensation experience to have with the game, so we learn a lot."

For Eagle Flight, he says, "the new controls are cumulative recipe of several techniques we learned in the past year. We are pretty confident we have something fresh or new. For us, it is really a breakthrough. It's not something a little better; it's really something new for the game."