SEARCH
A minimum of 3 characters are required to be typed in the search bar in order to perform a search.
Design
6 min read
Features

The team at Haven dev The Game Bakers set out to make a different sort of game about romance and use love, not as a goal or reward, but as a mechanic and system felt throughout every aspect of the game.
Aron Garst
Contributor
November 07, 2019

When you think about love in gaming, genres like dating sims and romancing options in role-playing games immediately come to mind. But that isn't what The Game Bakers, the creators of the boss rush indie hit Furi, wanted to focus on when they set out to make Haven a game about a stable relationship.

"We did Furi which was a very challenging, hardcore experience and we wanted something different afterward. We wanted to tell a love story," said The Game Bakers co-founder Audrey Leprince.

"There aren't that many love stories in games right now, it's all about dating, breaking up, or trying to avenge your dead wife. We wanted to portray a modern couple that has been together for a while. We know they are intimate."

Haven is what The Game Bakers call a unique mixture of Persona and Journey. It follows a young couple who escape from a powerful group we don't know much about yet, and combines floaty, exploration-driven gameplay where you glide across a lost planet and fight infected creatures with day-to-day activities like cooking and resting.

What's interesting is that those day-to-day activities and combat sequences are split in half, with one player controlling each character (or a single player controlling both if they don't have a second player, then that player has to handle the timing for two different prompts). Each player has different button prompts to attack, shield, and pacify corrupted enemies. Both players will need to coordinate and work together in combat, and in the daily activities, to get the most out of the game.

Haven originally started as a prototype that focused on the Journey-like floating exploration, but the split controls for other segments of the game were a decision made early in the process. "It was almost the first decision when we decided to do a game about a couple. If it was a game about love within a couple, we had to play both characters," said creative director Emeric Thoa. "It helps to make the game unique. When we designed the combat system, it made sense input-wise. I always design mechanics based on inputs. Pressing and holding face buttons and the d-pad in rhythm feels good. " 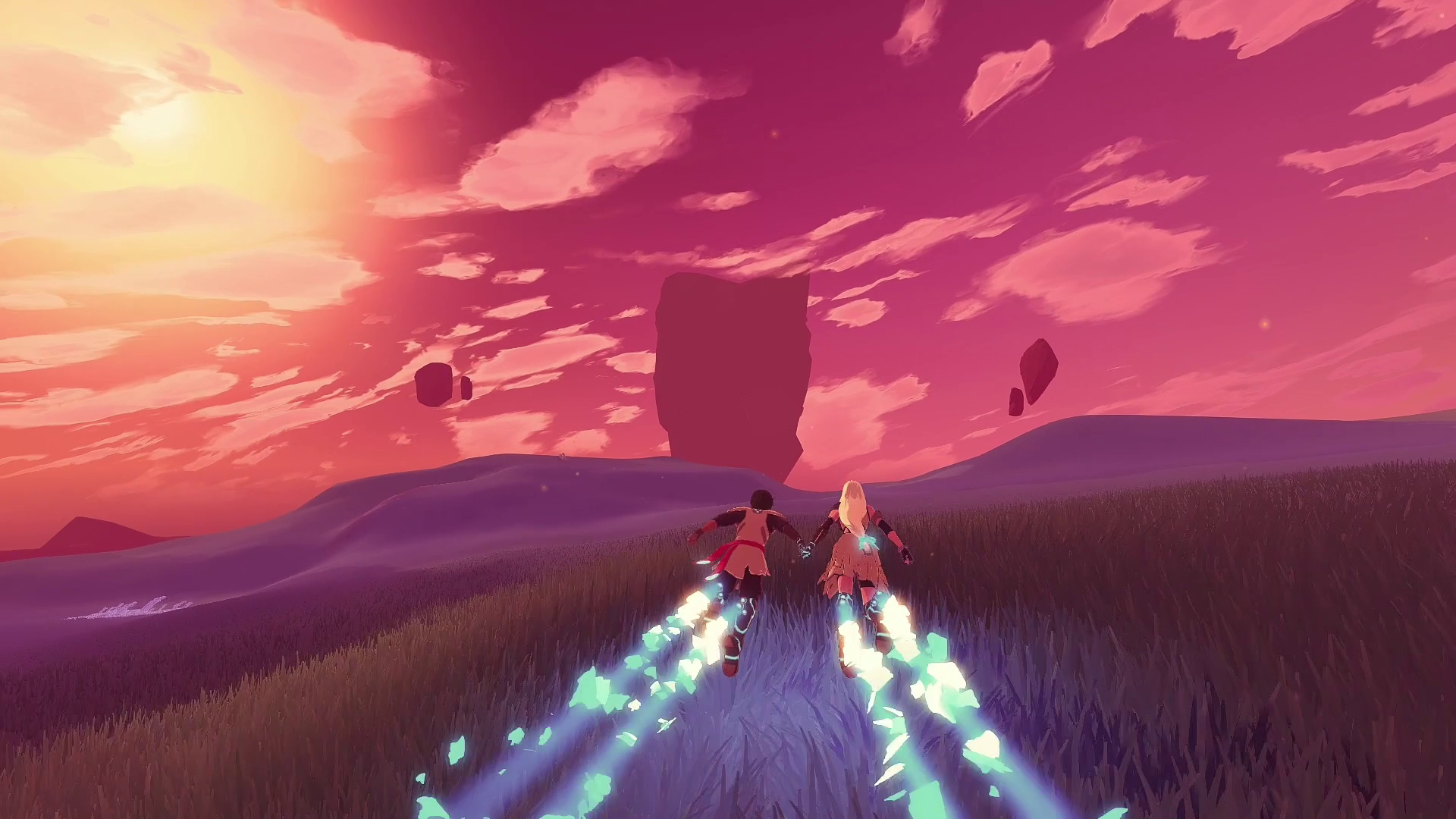 Conveying love as an in-game system is about more than just splitting these different mechanics in two, it's about making sure the entire game is about being together. That's why both players have to agree on dialogue options before proceeding, a disagreement is tough to deal with since both players can select dialogue when the menu comes up.

Right now, the gliding mechanic is the only main element in the game that isn't controlled by both players at the same time. Thoa and his team originally wanted everything in the game to be split, but it didn't make sense for the game's design.

"We initially tried to have both players control each character, but this becomes quickly unplayable because there's only one camera," he said. "I didn't want split-screen, it's a game about being together. Splitting the screen makes the experience less exciting visually and leads to tons of problems, and it does not help create the feeling I wanted to achieve: gliding together, like skiing together, in the trail of one another."

"If you keep both characters on screen, your controls become relative to the character, pushing the stick on the left doesn't necessarily mean going left and you don't necessarily see what's in front of your character," Thoa added. "Unless both players go in the same direction, it's not working. We tried many different systems, but eventually, the best for the experience was to have one lead and one follow, that you can swap anytime you want."

A similar issue came up when deciding how each player would control their character when in the Nest, the couples spaceship home-away-from-home where they complete most of the Persona-esque activities.

"Walking in a tight space, the camera, everything felt clumsy," Thoa, who thought he could display the theme of intimacy more clearly with a third, free-floating first-person camera, said. "There's no fun in just moving a character in a small indoor location. There was no challenge, no game mechanic involved. We solved that by making the player be a kind of the third eye in their little cozy home. You see them in the kitchen in the living room, being there."

While The Game Bakers couldn't split everything in the game between two players and still make the gameplay enjoyable, they believe the current setup does convey the idea of living together as a couple. But these split mechanics, which also include resource management and crafting, only worked if the narrative supported it.

"The biggest challenge in this kind of game is on the story side," Thoa said. "The game starts to feel like a complete experience only when the story elements are in, which is when the game is done basically. The gliding and combat can be working perfectly, but as long as they are not tied into the story, it feels incomplete." 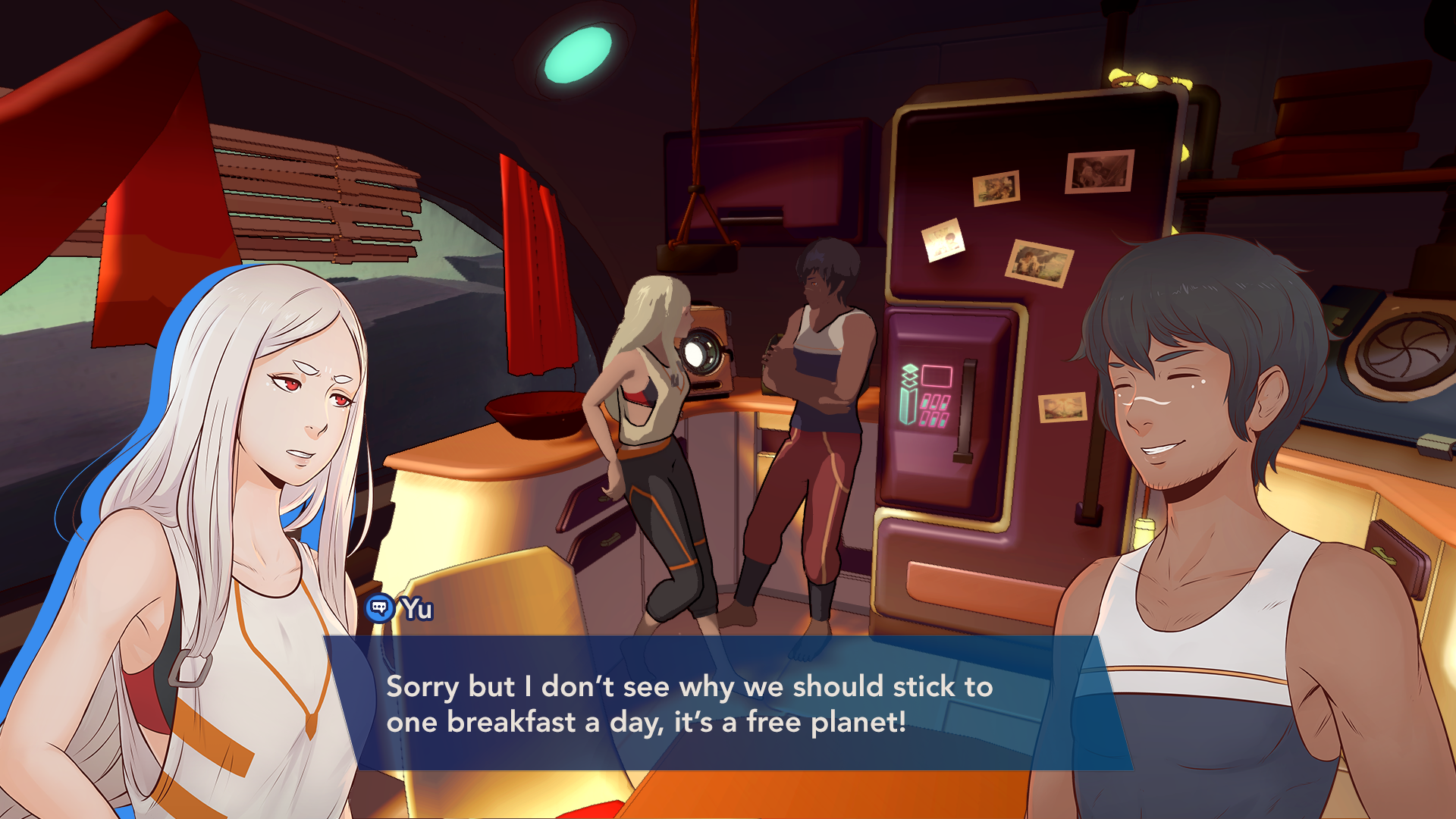 So Thoa and his team have to be content with everything not coming together and feeling complete until later in the development process. "At the moment, for instance, the beginning of the game is great as most story elements are in and complement the mechanics, but the second part is still very much in progress," he added.

Of course, there is also the challenge of making sure the story and both protagonists are engaging and authentic. Several people on the team at The Game Bakers are in long term, stable relationships themselves and they've tried to apply what they know to the dialogue and plot.

"From what we have seen, players really relate with the characters. This is a fun thing to share with someone, the dialogue especially because it's relatable and intimate, people feel really involved in otherwise quite mundane choices," Thoa said of hands-on demos at events like PAX West. "If a king asks the heroes in a co-op RPG to save the world, even if the stakes are huge, players don't care, they won't discuss that choice on the couch. But if the question is 'what should we have for dinner', I can assure you that a conversation will start."